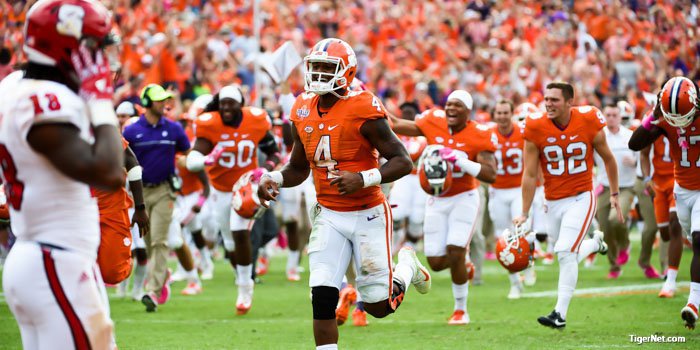 CLEMSON – Dabo Swinney brought his own guts Saturday afternoon, and Clemson still controls its own destiny after a wild, weird and improbable 24-17 victory over North Carolina St. on Homecoming.

Artavis Scott caught a 10-yard touchdown pass from Deshaun Watson on the fifth play of overtime, and Marcus Edmond made a game-saving play for the second time in three weeks when he intercepted NC State’s pass to the end zone as the Tigers head into the bye week with a victory that almost wasn’t.

North Carolina St. held the ball for the last six-plus minutes of regulation, setting up a chip shot, game-winning field goal as time expired. However, Kyle Bambard’s 33-yarder went wide right as the clock ticked to zero, sending the game into overtime.

State won the toss in overtime, and Clemson got the ball first, with Watson’s toss to Scott proving to be the winning score. Pack quarterback Ryan Finley attempted to hit Bra’lon Cherry in the end zone on State’s first play of the overtime period, but Edmond stepped in front of the pass and sealed the victory. Two weeks against Louisville, Edmond knocked Cardinal wide receiver James Quick out of bounds short of the first down marker to clinch that win.

The Tigers faced a 4th-and-1 at the State 16 in overtime, but Swinney elected to go for the first down instead of kicking the field goal and C.J. Fuller followed the Tigers’ jumbo package for two yards and a first down. Three plays later the Tigers scored.

Saturday’s win over an unranked NC State team was just as desperate as the win over then third-ranked Louisville was, with the Tigers turning it over four times, including three times inside the State red zone. The fourth was a pick-six thrown by Watson on the first play of the second half. State had 13 penalties for 120 yards and had an earlier field goal blocked to round out a mistake-filled day for both teams.

Clemson lost starting running back Wayne Gallman to a concussion, but Watson responded with a superlative effort, completing 39-of-52 passes for 378 yards and two touchdowns.

“Just another day in the office. We wanted to be sure ABC’s Coast to Coast ratings went up," Swinney said after the game. "First of all, I have to give NC State a lot of credit. We knew they were going to give us every ounce of juice that they had in their body, and they did. Right now, we’ve beat everybody but Clemson. We’re trying to beat Clemson, but we haven’t quite achieved that yet. We’ve had nine turnovers in our last two home games here, but obviously we’re finding ways to win against good teams.

"Today is a little disappointing because we get a stop on downs, then turn two over on the goal line and then we have a pick-six, and you can’t script it any better for NC State, so you have to give them credit. We moved the ball up and down, and there’s something to be said for finding a way to win, and that’s all I can say. It’s not always pretty and you have to win games like that along the way. At the end of the day, you have to love the fight of this team and their ‘never quit’ attitude. There were many frustrating plays, but you just had to move on to the next play.”

Swinney said he was pleased to see the defense step up when it counted.

“Defensively, I thought they pushed us around a little bit," he said. "I didn’t think we were on our ‘A’ game defensively. You can’t allow teams like that to have those kinds of opportunities. But we played well enough. We had some interceptions and tackles for loss, but Marcus Edmond executed on the last plays of the game for two consecutive games and two of the biggest plays we’re probably ever going to have. It’s just awesome to see those guys perform.”

He then added that he knew the game would come down to special teams.

“I told the guys that we were going to win on special teams. They got nothing on returns," Swinney said. "We executed on the tremendous fake punt. It gave us tremendous field position. However, the biggest play of the game was the blocked field goal by Christian Wilkins. I’m really proud with what we’re doing on special teams. At the end of the day, we’re 7-0 and the only team in the Atlantic Division that controls their destiny, and that’s where we wanted to be.”

The Pack put up 153 yards of total offense in the first quarter, but the first drive ended in a missed field goal and the second derailed because of penalties. The Tigers managed to push into Pack territory on their initial drive, but Wayne Gallman’s fumble ended the threat. Gallman was the victim of a helmet-to-helmet hit on the play, and he didn’t return.

The Tigers finally dented the scoreboard on the game’s second drive, marching 77 yards in 13 plays and taking over four minutes off the clock. The drive ended with a 25-yard field goal from Greg Huegel, and the Tigers led 3-0 with 1:17 remaining in the first quarter.

The teams bumbled through a good bit of the second quarter, but the Tigers put together a drive that was aided by a fourth down conversion. Facing 4th-and-6 near midfield, Clemson went into punt formation but Christian Wilkins took the direct snap and rumbled 10 yards for the first down on his first career carry.

The Tigers eventually reached the NC State one, and elected to once again go for it on fourth down. The Tigers brought out the jumbo package of Dexter Lawrence and Wilkins, and State called timeout. The Tigers then brought out two tight ends, and Watson was stopped well short of the goal line for the turnover.

State took over at the one, marched down the field and got a 28-yard field goal from Kyle Bamgard, tying the score at 3-3 with 2:03 left before halftime.

Clemson responded with its best drive of the half on its last drive of the half. Taking over at the 25, Watson went 8-for-9 for 84 yards as he led the Tigers to the late score. Included was a 4th-and-14 pitch and catch to McCloud to keep the drive alive with 15 seconds remaining, and Watson then hit Mike Williams on a 13-yard scoring strike with ten seconds left for a 10-3 halftime lead.

Clemson had the ball first to open the second half, and Pack corner Mike Stevens looked like he was the intended recipient. He gathered in the pass and rumbled 28 yards for the tying score. It was Watson’s eighth interception of the season, and the first one he’s had returned for a touchdown in his career.

Clemson responded with a strong drive that saw the Tigers move inside the State five-yard line, but Tyshon Dye’s first carry of the game ended short of the goal line and with a fumble as the Pack turned away another Clemson drive inside the five. Clemson’s defense stopped the Pack cold and forced a bad punt that gave Clemson the ball at the State 43-yard line. Three plays later, Williams caught a pass from Watson and sliced inside the 10 and fumbled, Clemson’s fourth of the day and third turnover of the day inside the red zone.

State returned the fumble 70 yards to the Clemson 26, but Wilkins blocked State’s ensuing field goal attempt and Clemson took over at its own 24 with 4:49 to play in the third quarter.

The Tigers then put together a drive that didn’t end with a turnover or punt. Clemson marched 77 yards in 10 plays, and Watson finished the drive with a four-yard run on the read option, his 12th career game with at least one rushing touchdown and one passing touchdown. It was his first rushing touchdown this season, however, and Clemson led 17-10 late in the third quarter.

Just as the Tigers thought they might have a little breathing room, the Pack put together another phenomenal drive, this one covering 14 plays and 75 yards, The Pack drove down the field, almost methodically and helped by a pass interference call and poor tackling, and tied the game on a two-yard run by Matt Dayes with 11:29 to play.

Clemson drove deep into State territory, but back-to-back penalties forced a punt and State held the ball until the end of regulation.

Clemson has an off week next week, then plays at Florida St. on Oct. 29th.