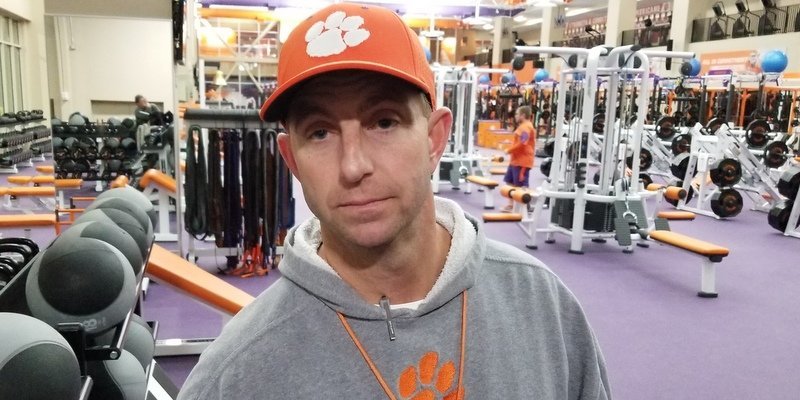 CLEMSON – Head coach Dabo Swinney is hoping that the two best practices of the season lead to a “humdinger” of a game in Charlotte Saturday.

No. 1 Clemson faces off against. No. 7 Miami (8:14 p.m., ABC) in the ACC Championship Game at Bank of America Stadium Saturday night, and the 11-1 Tigers have looked ready in practice.

“This truly might have been the best Tuesday and Wednesday practice we’ve had all year,” Swinney told TigerNet after Wednesday’s practice. “I’m just really kind of impressed with how the guys have come to work and the leadership. These guys are focused on trying to get ready for a very tough challenge. They know what’s ahead. This is a really good team that we’re getting ready to play, as you would expect. They’re a champion just like we’re a champion and we’re playing for the overall championship. Just good focus, good energy, guys are fresh.”

The Tigers are healthy except for linebacker Tre Lamar and cornerback Mark Fields.

“Health-wise, we’re in good shape. I don’t think Tre (Lamar) is going to quite be ready, but he does look a lot better,” Swinney said. “He feels better and he’s made a lot of progress. He pretty much has all of his range of motion back. He’s really just working on the strength now and strengthening it back up. I think they’re going to cut him loose when we start bowl practice, probably a week from Sunday. He should be ready to start bowl practice.

“J.D. (Davis) and Chad (Smith) are good. They’re both ready to go. The only other one that doesn’t look like he’s going to be ready to go is Mark (Fields). He’s re-tweaked his ankle somehow and he can hardly plant and cut like he wants to. Marcus (Edmond) is back so we should be good to go there.”

Swinney said he knew during spring practice that he wouldn’t have a problem motivating this team, despite having just won a National Championship.

“Just the chemistry, the accountability. It’s weird to say because you’re coming off of a national championship game but this team had a little edge to them,” Swinney said. “Had we had everybody back from that same team, I might’ve had to handle it a little differently, but all I did was spend all spring and all summer talking about who wasn’t here. We’re a really talented team, but there are a lot of talented guys. Guys that were recruited to come here and be really good players but haven’t had a lot of opportunities yet.

“They had a little edge to them coming into fall camp. I loved that and I did everything I could to embrace that. These guys have answered every challenge all year long. For 13 weeks, they’ve controlled their own destiny. They’ve believed in themselves. They believed in what we do. They believed in each other regardless of anything else. They’ve been in control of their destiny all year and after 13 weeks, they’re still there. There’s really only four teams that control their destiny right now and we’re one of them. We’ve got to put our best foot forward Saturday night to try to find a way to win. This is going to be a humdinger.”

No matter what happens Saturday, Swinney loves what he’s seen this season.