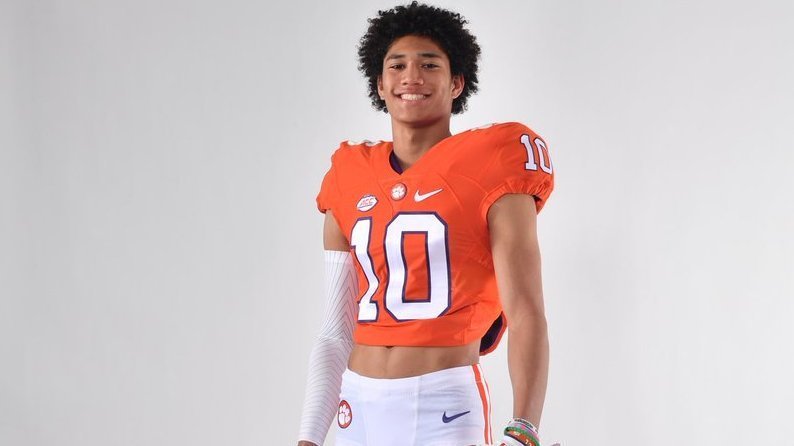 Hamilton poses on his visit

Kyle Hamilton’s recruitment has exploded over the last two weeks and it should come as no surprise that Clemson is leading the boom.

Before picking up an offer from the Tigers in late February, the 2019 3-star Atlanta (GA) Marist School safety had offers from Duke, Georgia Tech, N.C. State, Northwestern, Wake Forest and Virginia. After Clemson’s offer, schools like Georgia, Michigan, Notre Dame, Ohio State, Stanford, and Tennessee were quick to try to jump on board.

However, after a weekend trip to Clemson for junior day, the Tigers have rocketed to the top of Hamilton’s growing list.

“It was really fun. I had a great time,” Hamilton told TigerNet after the visit. “Getting to see the facilities and everything was awesome and getting to meet all of the people. I got to meet all of the coaches. The indoor was amazing. Obviously, they have the biggest weight room in the country and that was pretty impressive along with all of the fun stuff like the slide, the basketball courts, the barber shop, bowling alley and all of that stuff. It was really cool.”

More than the facilities, though, the people at Clemson stood out to Hamilton.

“Definitely just the people there,” Hamilton said. “I didn't get to talk to Coach Swinney personally but he was talking to the whole group. Everyone on the whole staff seems like good, down to earth people. Coach Swinney seems like he's hired a coaching staff that he's close with and that he actually knows. They also have great football.”

Clemson only has four scholarship safeties on the roster, so safeties coach Mickey Conn’s message to Hamilton was simple.

“They said I'm very important. I was talking to Coach Conn and he was talking about how they haven't taken a safety in two classes and that it would be vital to get a big safety like me,” he said. “It was a good conversation we had.”

While Hamilton’s recruitment is just beginning, he already has a timeline in place and Clemson will be a factor until the end.

“Definitely high on the list. They'd be hard to not have them up there, but they are definitely high,” he said. “Hopefully, I'll make a decision before my season starts and may during the summer.”

In 2017, he has 60 solo tackles, six interceptions, and eight pass breakups. He helped lead his high school to the 4A State Championship game and was named first-team All-State after the season.