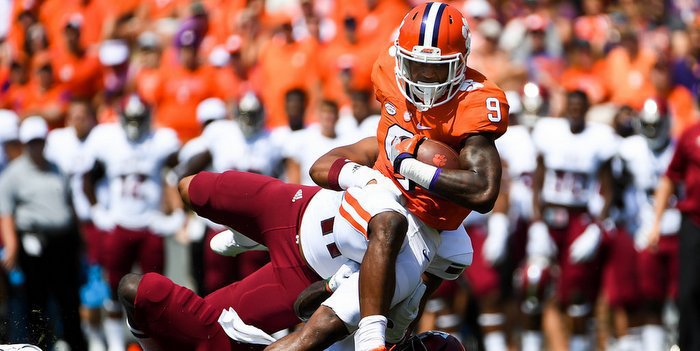 Gallman fights for yards against Troy

CLEMSON – The Clemson coaching staff didn’t advise Wayne Gallman that his carries would be limited heading into Saturday’s home game against Troy, so he was just as surprised as the fans when he spent more time on the sideline or in pass protection than he did running the football in the Tigers’ 30-24 win.

He was surprised, but he wasn’t angry. Why?

“A win is a win,” Gallman said Monday. “That’s the most important thing.”

At Auburn a week earlier, Gallman had 123 tough yards on 30 carries in Clemson’s 19-13 victory. Against Troy, Gallman gained just 34 on nine carries, his fewest number of carries since he had five against Georgia State on November 22, 2014.

Head coach Dabo Swinney said the plan was to give other players an opportunity to shine.

“We wanted to get those other guys in there and give them some opportunities,” Swinney said. “We wanted to get those guys in there early and then the game just kind of changed a little bit on us. We are not worried about Wayne Gallman. He had a really good fourth quarter. He made some good plays for us in the passing game as well. He had three good catches and one big play. We know what we have in Wayne. He will be a workhorse for us all year.”

Gallman did say that when things aren’t going well – and Clemson’s offense is struggling right now – he wants to be the player the coaches lean on for success.

“When things are not going as planned and we are not running up the score, of course I want to take the lead and try to push the team forward and do whatever I can,” he said. “But, it is not up to me. It’s up to what the coaches want.”

He then said that against Troy there weren’t many open lanes to run through but that he’s glad there are other backs the coaches trust.

"I can't really say anything to that other than I haven't had anywhere to run. The basis from this past game is the coaches wanted this to be a game where younger players could get their chances out there on the field and things just didn't go our way. I'm glad we got the guys behind me some chances to get in. They came out with a different set than we thought they would. They had stunts and we didn't really recognize. They did a good job with what they did up front."

He was asked if teams are loading the box in an effort to stop the run and he said yes, but that when teams load the box he wants the chance to break the stalemate.

"Yeah, it seems like that. I'll take on the challenge and that's all Coach Swinney, Coach Elliott, and Coach Scott want us to do,” he said.