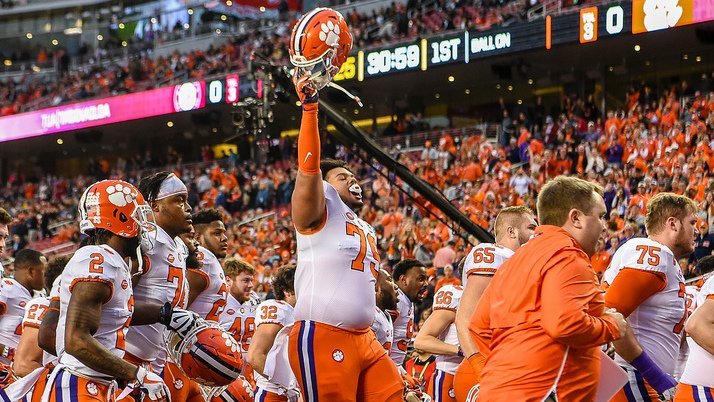 CLEMSON – From making cakes to pancake blocks, Jackson Carman is a man of many talents. He can sing, play multiple instruments and cook. He’s also a pretty good offensive lineman.

The former 5-star from Fairfield, Ohio, is also the king of watersports in the Clemson area, shocking his teammates and coaches with his acrobatic abilities on the wakeboard. Carman even baked a birthday cake for quarterback Trevor Lawrence and made Kathleen Swinney, wife of head coach Dabo Swinney, an Oreo Devil’s Food cake.

During the recruiting process, Carman took a long look at Southern Cal, wondering if the cultural aspects of going to school in Los Angeles would outweigh the distance. Instead, he chose Clemson.

“I feel like one of the benefits for me coming here when making my decision, is that there were so many things to do in L.A., I felt like I might get distracted,” Carman said. “(Clemson) is a good place for me to lock in.”

“The only time an offensive lineman gets called out is because he’s doing something wrong,” Carman said. “If he’s not hearing his name, it’s a good thing.”

Carman earned valuable experience in 2018, playing 209 snaps in 13 games as a reserve. That included 34 critical snaps in place of injured starter Mitch Hyatt in the Tigers’ division-clinching win at Boston College. Carman has taken that game experience – and the experience of going up against the best defensive line in college football during practice last season – and aims to start this season at left tackle.

“He’s still got some work to do body-wise. It’s his best asset and his worst asset,” Swinney said. “He’s a very blessed person physically for his position and his craft. He’s incredibly athletic. He’s naturally strong. But it’s also the worst part because he’s got to work really hard to maintain (weight). He can get big in a hurry.”

“I’m moving well right now, but it’s really hard on my body and my joints,” Carman said. “It’s just healthier to be at a lighter weight. It’s always challenging (to lose weight). I feel way different this season. This time last year, coming out of mat drills, I was dying. I couldn't breathe. I feel much better now, and I credit Coach (Joey) Batson and those guys.”

Carman said he doesn’t stress about battling for a starting job.

“I don't think it's stress. I am just coming out here and having fun,” Carman said. “It was fun last year, but being able to go against guys like Xavier (Thomas) and KJ (Henry) and Justin (Mascoll) and those guys is great. What more could you ask for? Going against them is preparing me physically, and because they are all so fast, it slows the game down for me.”

Swinney said he expects to see Carman take a huge leap over the summer.

“He’s still got to grow up a little bit, accountability, maturity. It’s some little things from time to time. He’s still a young guy,” Swinney said. “I expect him to take a giant leap between now and September. I’ll be very disappointed if he doesn’t.”