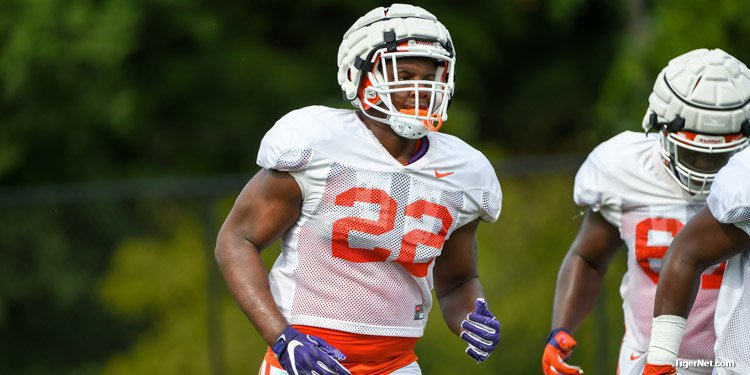 Freshman Xavier Kelly could be poised for a breakout season.

CLEMSON – With just four experienced defensive ends – and Christian Wilkins – Brent Venables is tasked with yet another rebuilding project.

Clemson’s starting defensive ends Clelin Ferrell and Austin Bryant are set, but after that there’s a lot of teaching, training and molding that must happen in a short amount of time to create competitive depth and to the end position.

After losing Richard Yeargin to injury and LaSamuel Davis’ decision to transfer, Clemson’s seventh-year defensive coordinator will be forced to rely on young guys like redshirt freshman Xavier Kelly and freshmen Logan Rudolph and Justin Foster.

“Possibly Logan Rudolph. Chris Register came out of the spring as the number two. He's done well,” Venables told the media after Tuesday’s practice. “Christian Wilkins can play there. Cle (Clelin Ferrell) and Austin Bryant. Justin Foster has done some really good things. We signed him with the understanding he was going to be a d-end and he's been very natural. It's been pleasing to see. Sometimes they look slow and heavy-footed and they don't play physical because they don't know what they're doing. For a guy that's never done that, he's shown some good instincts and some comfort there - better than you would have expected.”

To get the young and inexperienced players ready for game day, Venables said there are several things both he and new defensive line coach Todd Bates must do.

“There's a lot of things. You have to give them all of the looks - the looks you know he's going to see the most - make sure he's got his eyes trained up, his pad level trained up, his physicality trained up, find out what he does well and try and feed him a lot of that,” Venables said. “Try to stress him a little bit mentally and physically. Put him in some situations that he's got to learn how to compete, play with leverage, get off of blocks, chase the ball. See if he's willing to do all of those things. You really want a catalog of information to really gauge.”

Venables said the next couple of weeks will tell a lot about his personnel and how he’ll be able to use them once the season starts on September 2nd.

“Through the first few weeks of fall camp, you're able to kind of see if a guy is going to be ready or not,” Venables said. “Sometimes your hand is forced and you've got to get him ready and sometimes it's like, 'let's just hold on.' Maybe there are certain things you can do scheme wise to help guys just so personnel wise you don't have to play to the next guy if he's not ready. There are things you can personnel wise and scheme wise that can match up to your strengths.”

The good news is Kelly – the freshman from Kansas who was on the cusp of avoiding a redshirt before a moped accident last season– has shown a lot of improvement in every area of his game.

“He's playing well. He's improved from the spring. He's improved just doing the basic things - alignment, stance, how he gets off the ball, his footwork, discipline, reading his keys, playing with leverage, playing with quickness, having a plan,” Venables said of Kelly. “He's doing a lot of things that have been pleasing and definitely has improved. I was a little concerned after the spring with where he was because of my expectation and knowing our roster and really where he needed to be. I've been really pleased with his progress. He's put a lot of work in. A lot of guys have poured into him and helped him all summer and it's very obvious.

“The fundamentals are more natural now. His stance, alignment, assignment, putting his eye on his key, trusting his key, reacting in the appropriate way in which is key tells him. Run, pass, down block, squeeze, close - all of those things. He's improved in every phase. He is not a complete, polished player and ready to be the guy yet, but I do think he's ready to be a guy and a guy that we can rely on if he continues to progress. So far in camp from where he was in the spring, he's on the right path and he's trending in the right way.”