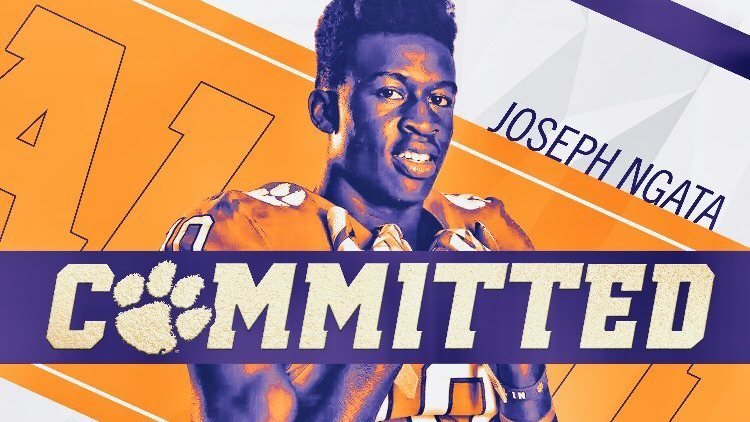 Ngata committed to Clemson over the weekend

Ngata, a 4-star wide receiver out of Folsom (CA) picked the Tigers over Alabama, USC, and Washington, and would be Clemson's first signee from California since Bobby Forbes in 1991. Ngata and his family attended last weekend’s All In Cookout, and it was there that Swinney imparted some advice to the young playmaker.

“Coach Swinney told me, 'Surround yourself with good people and you'll be successful.' Clemson has a bunch of good players and they have good families and they are respectful of other people,” Ngata told TigerNet. “Those are the kind of people you want to surround yourself with. It wasn’t a hard decision to make.”

Ngata watched his mother playing a trivia game and took satisfaction in knowing he was making the right decision.

“I saw my mom having a good time and connecting with a bunch of people. She didn't have to search for anything anymore, I feel like,” Ngata said. “She was communicating with everyone like she had known them forever. I think that is one thing that really stood out to me.

Ngata walked over to wide receivers coach and co-offensive coordinator Jeff Scott to deliver the news of a commitment.

“I told Coach Scott at first, and it seemed like he didn't believe me. He was like, 'Are you serious? Are you playing with me?' It was kind of funny and I went up and told Coach Swinney and he was really excited,” Ngata said. “He (Swinney) was already bonding with my mom and they were having a good time talking. So that was the perfect time to communicate our thoughts.”

Now, he gets to work with one of the best wide receiver coaches in the game in Scott.

“I am very excited to work with him,” he said. “My first visit I saw him coach and saw how he interacted with his players. He had a lot of energy in the drills, so I was excited to learn more. I can't wait to play, but also to just get to practice and get better.”

The expectation for his time at Clemson? Win a National Championship.

“That is the expectation that Coach Swinney and the coaches have set at Clemson,” Ngata said. “Everybody wants to win a National Championship, and that is why you go to a place like Clemson.”