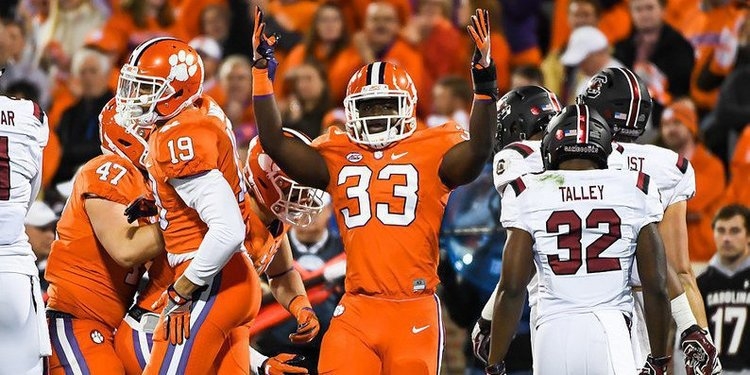 Clemson is looking for a sixth consecutive win in the series

TigerNet reached out to several former players and asked them to give a score prediction and their thoughts on how it will all go down. We told them it could be serious, it could be funny, and it could even have some smack talk.

Keith Yusef Kelly - I'm thinking 63-13 I believe they get some garbage time points. Our starts are out of the game mid-way in the 3rd quarter but remain aggressive. Tavien Feaster doesn't get over 50 yards. ETN gets the TDs needed to break the TD record along with 168 yards rushing. Trevor has 300+ yards and 4 TD's. Higgins and Ross combine for 13 catches. Higgins has 121 yards and Ross has 98. Defense gives up its first 300-yard game due to reserves playing against South Carolina's starters in garbage time.

Chris Chancellor (PT) - I think USC will pull out and throw every trick in the book at Clemson. They’re in spoiler mode and would love nothing but to spoil our chance at another playoff run. They probably will go for it on 4th and 30 from their own 40 lol. They have nothing to lose and Coach Muschamp knows it. But still, Chicken little, Chicken noodle, Popeyes Chicken sandwich, don’t matter, Tigers will eat em all, so I say Tigers by 70! All In!!

Marquan Jones - With good quarterback play the Tigers take the win 42-10. It’s going to be nuts in Williams Brice but we will overcome.

J.K Jay - No moral victories to be found this Saturday. Tailgates included. The offense will crank the ROY bus into the highest gear all season. Coach Venables is what we like to call competitive. I imagine this will be the best defensive output all season to this point. USC Qb will have a Todd Ellis type of a day with 73 interceptions. Unfortunately, the most yards given up will be to water bottles and D batteries. At least they tell us we are number 1. Early in the second quarter, the stadium should be completely orange. Leaving only a sandstorm dance party in the locker room. Coach will cement his legacy on the rivalry as the first “cheerleader” to lead the football program to 6 in a row over its rival and to score 77 points in their house. Shout out to Terry Don for knowing a “cheerleader” would be a better coach than some guy that calls himself “Boom” Clemson 77 UofSC 3

Sonny Cassady - Clemson 62 SC 0 Dabo, coaches and players have a lot of pent up emotions and I think they're ready to unleash them all on the Gamecocks- no respect from CFB committee, national press, individual honor selection committee members and certainly no respect from USC fan base. I think the Tigers will fire back at this bottle-throwing BS with some points being thrown on the scoreboard!

Quandon Christian - Clemson 63 USC 10 Close game for a quarter maybe ...I think we put a full game together. I wanna see Travis, Oline, and other RB break their will in the running game ...I already know Coach V gonna scheme them up on defense I can’t wait ...THIS IS OUR STATE.

Touchdown Chad Jasmin - 56-6 just like 2003 everything Clemson does will work.

Mason Cloy - I look forward to a win, but rather than providing a score, I would like to see the younger guys on the team putting points on the scoreboard around half time. This would provide a large margin and maintain Coach Swinney’s continuous development of the program...so we can do it again next year and the years following. Go Tigers!

Sam Van Gieson - As high noon approaches on the finale of this exciting 2019 season, Coach Muschamp tries to channel his inner Spurrier... only his hair wasn’t designed for a visor. Very similar to how the Gamecock defense wasn’t designed to stop people, nor the offense to score points. With the gamecocks still reeling from their heartbreaking loss to the mighty mountaineers of Appaloosa State, I hear most of the players opted to play against the bye week opponent and sit out the Clemson game... much like a “floating mulligan” on the golf course. With nobody left standing except Tavien Feaster against the Tigers (envision John Snow awaiting the horde in Game of Thrones... with no reinforcements) I predict a sound thumping in Columbia, Clemson 56- UofSC 9

Jim Barnette (who was QB16 before Trevor Lawrence - 1) Most likely scenario. Clemson will find itself in a hard-fought game for a quarter, then talent will take over the Tigers win going away 42-13.

2) Possible scenario. Clemson jumps to a large lead amid a plethora of game-stoping events including an official knocked out by a flying liquor bottle that miraculously flew on its own from the Gamecock Student Section. The game stopped as he was carted off.

As the players came back out on the field they all had used condoms, garbage and autographed pictures of Spurrier stuck in their cleats from the walk through the tunnel. Of course, the game had to be delayed for cleanup. This irritated the Clemson fans, TV crews and the 6 Coot fans left in the stadium.

With the game totally out of reach by the middle of the 3rd quarter, the Tunnel suddenly starts smoking again and 2001 plays and the deceased official who was killed by the flying Southern Comfort bottle to the head in the first quarter is rolled back into the stadium on a gondola under a shroud and parked under the goal post near the designated bottle toss area. Of course, the game was stopped again! Since there were no Gamecock fans in attendance by then, the Clemson fans begin to boo because of the incessant delays. The Coots in the parking lot hear this, zip up their pants and return to their seats.

With the stadium now full again, the officials go to remove the stretcher from under the goal post and the smoke starts again, 2001 starts again and out from under the shroud……………jumps the oldest high school QB ever! It is a miracle!! The Coots recognize Jim Carrey Bentley by his black, Old man socks and pandemonium breaks out as he sheds the shroud and dashes wildly to the sideline in a frenzied display of immaturity. The miracle continues as he is able to return to the game and continue his career. Amazing story!! Of course, he threw 3 more interceptions and was sacked 8 times in the fourth quarter as the Coots got their butts kicked again………..but it WAS a moral victory in Cootville and rings will be bestowed for the 21-82 loss.

Bradley Pinion - Clemson 55 USC 14 Trevor Lawrence looks like the #1 draft pick that he will be and Etienne rushes for 150+ finally putting him in the Heisman race. Spiers never has to see the field and we play all 114 players, would be 115 but like I said Spiers never has to punt. Go Tigers!

Phillip Price - My thoughts are, I love the noon start, less time for their fans to get "dialed in", as small a thing as that is, if the momentum were to swing in their favor it'll matter, that being said if we avoid a costly special teams mistake to go ALONG with a couple of turnovers I'm seeing it as a steady build to a 45-14 W, with the only guarantee being that Todd Ellis brings a few more not well thought out statements to his broadcast happy Thanksgiving my man to you and the family!

Dante Stewart - I say they give us everything that they got. It will always be a game somehow. But because of our experience, depth, and talent, we easily win this one 56-14. ETN breaks some type of record today. Defense comes away with at least 4 sacks, 3 picks, and a fumble recovery. Don't be surprised if someone takes a punt back for a TD as well. I think we are playing at our highest level each week and becoming more confident in what who we are and what we do. I might add that a big man gets in the endzone as well. I mean if you're going to beat South Carolina might as well let the big boys eat! lol!

Justin Parker - My predictions: #3 Clemson on top 45-10 over unranked South Carolina! I predict our Tigers will stun the Gamecock crowd very early at William Brice to make sure we send them walking to their tailgate spots early to cheer on their #5 Alabama Gamecocks!

Mark Buchholz - Clemson 52 Gamecocks 10. Etienne rushes for 200+ and 3 TDS and Trevor throws for 250 and 2 TDs rushes for 50+. Their fans will keep it classy (like usual) and throw trash and our players will be forced to keep their helmets on all game.

Tig Willard - Final score 45-10 and everyone on the sideline will get a chance to play. Chase Brice’s backup will even get the opportunity to show his skills.

Brandon Thomas - 45-7, clearly we’ll get their best shot early. But all this will be to no avail. They’ll probably have a few trick plays that they’ll try. One might work late and that’s how they’ll get a score on the board.

Brian Tillotson - Clemson will win 55-7. Based on what I've seen from this year, this team has just continued to gel more and more. Defensively, these guys are clicking on all cylinders and the offense is loaded with weapons all over the field. As they said on ESPN, this would not be a team I would want to face right now. Championship Season is here with trophies for all remaining games. I just don't see this train slowing down at all. If anything, it's really just now picking up speed.