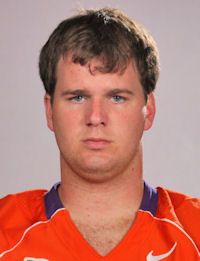 Tight End
B I O
Has played 84 snaps over 13 games in his career...came to Clemson as a defensive end, the position he played in high school.

2009: Appeared in three games for a total of seven snaps...played two snaps against Boston College and Wake Forest, and then three in the win over Coastal Carolina...those were the first three appearances of his career in a Tiger uniform.

2008: Worked as a defensive end throughout the year, but did not appear in a game.

Before Clemson: Rated as the #96 defensive end in the nation by Scout.com...#22 prospect in Alabama by Rivals.com...#17 prospect in Alabama by SuperPrep...all-region pick by PrepStar...had 79 tackles, 13 tackles for loss, and 9.5 sacks as a senior at Mountain Brook High School...played defensive end and outside linebacker...had five sacks as a junior...lettered in baseball...recruited by Dabo Swinney...chose Clemson over Duke, Kentucky, Northwestern, Purdue, South Carolina, and Vanderbilt.