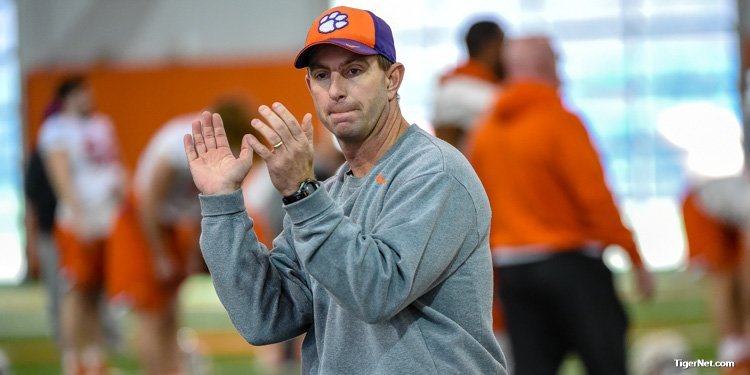 Chalk it up to plane time.

If No. 2 Clemson defeats third-ranked Notre Dame later this month in the Cotton Bowl, head coach Dabo Swinney might give part of the credit to the fact that the Tigers have a little extra prep time for the Irish. Much of Swinney’s time has been spent on planes – traveling to and from the awards show and appearances on the banquet circuit.

Add in Monday’s cross-country trip to California – he came back Tuesday – and Swinney has seen a lot of the inside of an airplane.

Swinney used the extra time to watch film of No. 3 Notre Dame, Clemson’s opponent in the Cotton Bowl. The Irish are 12-0, led by quarterback Ian Book and a stout defense that includes Thorpe Award finalist Julian Love.

“I have a good feel for who they are and what we have to do from a prep standpoint, and it is the same thing with our staff,” he said.

Swinney and co-offensive coordinators Jeff Scott and Tony Elliott, along with quarterbacks coach Brandon Streeter, flew to California to check in in 2019 wide receiver commit Joseph Ngata and 2020 quarterback prospect DJ Uiagalelei. The coaches can initiate contact with recruits until Sunday, which starts a dead period that lasts until January.

The early signing period begins a week from today, so the coaches left the practice facility Wednesday and went back out on the road recruiting.

The Tigers will practice through next Wednesday and then will take another extended break (Thursday, Friday, and Saturday) so they can go home and spend some time with their families. The team will meet back in Clemson on Dec. 23rd and leave for Dallas later that day. The team will practice in Dallas on Christmas Eve and Christmas Day – Swinney promised a celebration of some sort on Christmas Day that is being planned by his wife Kathleen.

Until then, however, it’s back to the grind.

“We are going to grind up here for the next week and then we will give them Thursday, Friday and Saturday, it is almost like an open date kind of schedule for us,” Swinney said. “Then we will come back in here Sunday morning for meetings and a lite practice and then we will head to Dallas on the twenty-third.”

The Tigers are appearing in their fourth consecutive College Football Playoff, and that experience can only help the team as it prepares for the Irish, who are making their first appearance in the playoff.

“It definitely helps,” Swinney said. “We all draw on our own experiences, good and bad as you go through whatever it is that you are doing. This is our fourth time in a row and we have been in a lot of big ball games and stuff, so I think we have learned a lot over the years.

“I think we have a good formula that we believe in as far as when we get ready and a good balance.”

The Tigers will use the extended prep time to hone in mentally and physically.

“You have to play well. You have to prepare well, and for us, it is about having the right balance,” he said. “Getting our opponent prep done, but also really sharpening ourselves up from a fundamental and technique standpoint. This is a long (break) from a physicality standpoint, so you have to make sure you have a good mixture of good-on-good.

“You can’t just show up on Dec. 29 and start tackling somebody. You have to have good balance, so our experience really helps us as far as striking the balance that we need from a preparations standpoint and how we manage the schedule.”