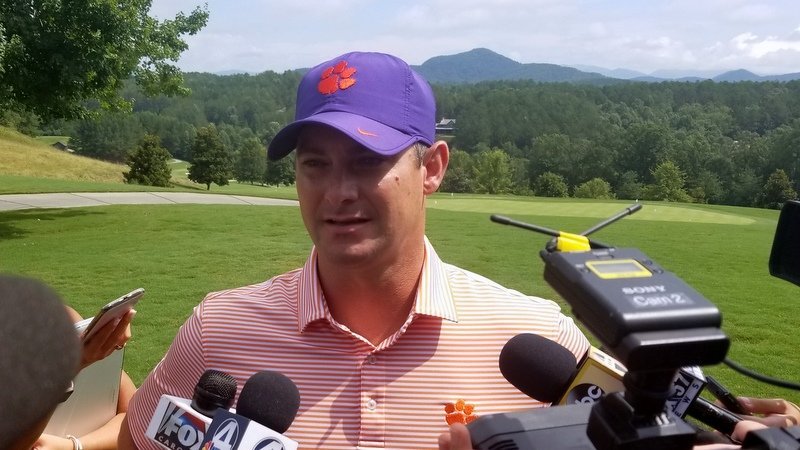 SUNSET, SC – Football is back.

Members of the Clemson coaching staff met with the media Tuesday morning at head coach Dabo Swinney’s media golf outing at The Reserve at Lake Keowee to discuss the upcoming season, and there are plenty of news and notes to pass along.

*We started with OL coach Robbie Caldwell. Caldwell told us that heralded recruit Jackson Carman has lost 20 pounds since the spring and looks good. When I asked him what held Carman back in the spring, Caldwell said, "You guys. These kids read everything written about them. I don't pay attention to rankings and wish we didn't have them."

Caldwell said that some might think that Mitch Hyatt is undersized for a left tackle so the goal this summer has been to give him some bulk. He didn't say how much

Caldwell was asked what his message was to the team after the loss in the Sugar Bowl, and he said, "The sun will come up tomorrow. But those kids rebound from losses easier than us coaches. I don't remember the wins, I remember the losses."

*Clemson co-OC Tony Elliott said Kelly Bryant leads the QBs out of spring but Trevor Lawrence was "on his heels." Looking for consistency in fall camp from the QB room.

*Elliott added that Tavien Feaster was a player who has transformed his body this summer. Down to 215 and has looked good this offseason by all accounts.

*Caldwell says he loves where the offensive line is at. They have added strength and weight. Says he has a lot of options since a lot of players can play multiple positions.

*Caldwell says Noah DeHond has a shoulder injury that he is working through right now that has been holding him back in the weight room. He is almost back to 100%

*Elliott on QBs and what's he's looking for: Consistency. “The guy that can come out every single day and do what coach Streeter is asking them to do. Obviously, all of those guys are capable of making the big throws and making the big runs. But who can manage the system? Who can do the little things and be consistent? That's going to be the guy who's going to play.

“It's the same as it was in the spring. It was a tight battle coming out of the spring and obviously, Hunter is a guy who decided to move on and I’m very excited about his opportunity and future, but now all it does is give those guys more opportunities and more reps to compete. We’re excited about where we are. We know Kelly left the spring as the guy and Trevor was on his heels and Chase Brice made tremendous progress too. We’re excited about getting back on the grass and seeing who took what we asked them to do this offseason and summer. And really what it is is going back through the base installs and getting the details down. Because that’s what wins big games. Obviously big plays are important, but who can execute at a high level and execution comes down to details.”

*I asked Streeter this: If Kelly wins the job, how do you get the downfield passing game competent enough to win a championship? His answer, "I think as coaches we have to emphasize it more. We didn't emphasize it enough last season, and that starts in practice. We also have to keep in mind that we will be running our guys more, but it's something we have to do in practice."

*Coach Bates told me he "almost fainted" and then did a split when he heard the news that Christian Wilkins was coming back.

*I asked Bates about the poetry that he sends to recruits, and he called it "a gift." He then told me that it started with him freestyling back in the day. I asked him if I could video him freestyling, and he laughed and said, "not today." He then told me that staff member and former player Miguel Chavis will freestyle at the drop of a hat and they frequently battle it out.

*Jeff Scott says Trevion Thompson probably had the best spring out of the WRs, with the boundary receiver battle with Tee Higgins still "too close to call."

*Todd Bates said DT Jordan Williams had a phenomenal spring. He came in at about 272 as a freshman and now is 305. He has worked hard in the weight room and Christian Wilkins has taken him under his wing.

*Scott's comparison for freshman Justyn Ross is Mike Williams. Says he's bigger than Williams was coming in and "all returns have been very strong" on Ross so far.

*Todd Bates says he believes Dexter Lawrence will be 100% this season. He has heard good reports this summer on him.