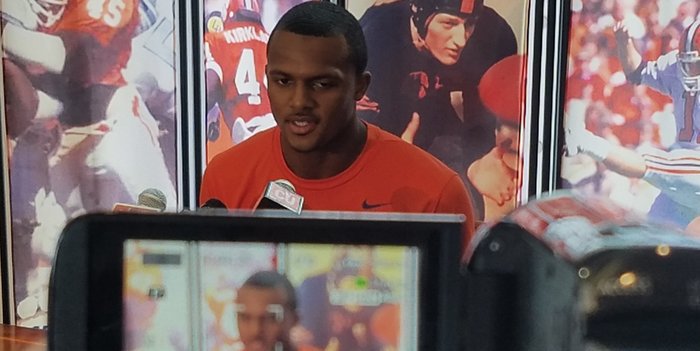 Watson talks to the media Monday

CLEMSON – The image is burned into the minds of Clemson fans. Quarterback Deshaun Watson moved to his left and attempted to make a cut on Georgia Tech’s defense, but wound up crumpled on the ground holding his knee.

Clemson’s offense wouldn’t be the same that day, and those same fans have flashbacks of the horrors that have been visited on the Clemson team in Bobby Dodd Stadium. Watson has flashbacks as well, and Monday he talked about the play and the game that changed Clemson’s fortunes that day.

Watson returned as a starter for the Tigers that day after missing three games with a broken bone in his right hand, but he was hurt when making a cut late in the first quarter. Watson ran for seven yards and a first down before falling to the ground and grabbing his left knee.

“I have flashbacks about that play. I just remember that whole morning - from warmups to getting ready to play and coming back from the hand injury and being excited to play,” Watson said Monday. “And then in the first quarter going down. Of course, it's going to pop up in my mind, but it won't be anything too serious. I didn't think at the time it was too serious when I walked off the field. I thought I was going to be able to go back out there and play, but they didn't want to take a chance. And then a week later I got the x-rays and the MRI back, and it's hard to imagine. I was walking fine and feeling normal, and the swelling was down, but it was just one of those weird things that kind of happened.”

Cole Stoudt came on in relief of Watson and promptly threw an interception that was returned for a touchdown, adding to the list of misery Clemson has endured at Georgia Tech. This week, the No. 5 Tigers travel back to Bobby Dodd for a Thursday night matchup with the Jackets knowing they haven’t won there since 2003. 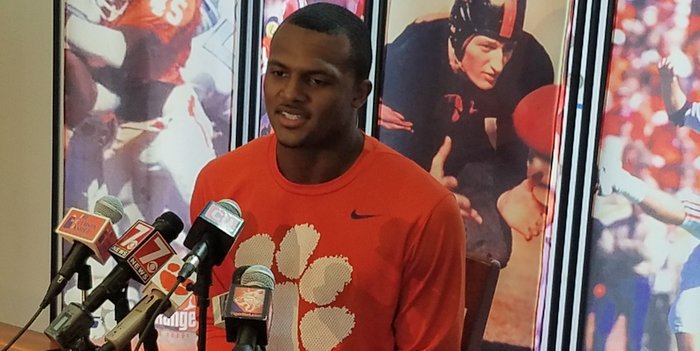 Watson talks to the media Monday "

Watson said the coaches have mentioned the streak but haven’t brought up the myriad freak plays that have gone Tech’s way over the years.

“Coach (Dabo) Swinney brought it up in one of the preseason meetings,” Watson said. “One of our goals is to go down there and win of course. It's going to be a challenge for us because we haven't won down there since 2003. It's a good challenge for us to break that and go down there and improve to 4-0. “They haven't mentioned it (the freak plays), but we know a lot of crazy things have happened before. If we do our job and play Clemson ball, then everything should take care of itself.”

The key to Thursday, Watson says, is worrying about the present and not dwelling on Clemson’s lack of success at Tech.

“You don't want to hammer too much on the past,” Watson said. “This is a totally different team. It's 2016, and that was 13 years ago. We can't live in the past, we have to worry about the present and worry about what we're doing now.”

Watson grew up in Gainesville, Georgia, so he will have a lot of friends and family on hand for Saturday’s contest.

“It's the home state. A lot of people and a lot of the fans that watched me play in high school are going to be at the game,” he said. “It's like homecoming. Each game, no matter how big it is, is special to us. We treat each opponent the same no matter who we are playing or what type of record they have. Of course, I am going to be very excited and all eyes are going to be on us on Thursday night and we just have to go out there and show what we have and play Clemson ball.”

Watson appeared to get back in his usual rhythm during Saturday’s 59-0 hammering of South Carolina St., and the coaches were able to rest their starter for much of the second quarter and the entire second half.

“I enjoyed it. I enjoyed the time I was able to play and then the time watching the other people play,” Watson said. “After the game, I got a lot of rest watching other teams play around the country. A lot of people got experience and our depth was improved, and that's something we needed going into this week.”