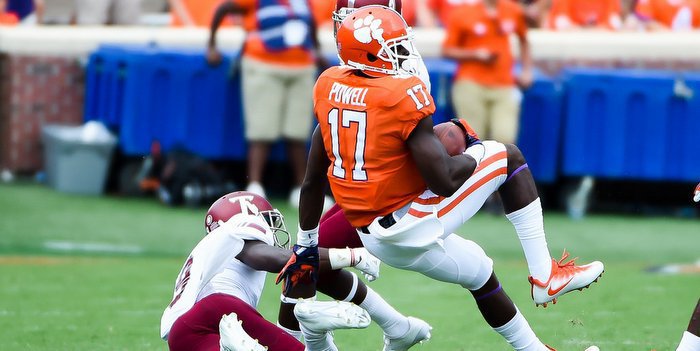 Cornell Powell hauls in his first reception as a Tiger

CLEMSON- There is nothing like game day in Death Valley for the first time, especially for young freshman players.

Several freshmen standouts saw the field in Saturday's thrilling win over Troy, and they spoke with the media earlier this week to talk about their experience and for older players the feeling of being back in front of the home crowd.

Q: How did it feel to get your first playing time on Saturday in Death Valley?

"It felt really, really good and special just to be out there and be a part of the team now.”

Q: Did you have any butterflies going into the game at all?

"I got nervous once they told me I was gonna start on the kickoff return. I was like, alright I can't make any mistakes. Just go out there and handle business."

Q: Would you have liked to have played at Auburn? What do you expect your role to be during this freshman season?

"Definitely I would have liked to have played, but I know I have to wait and I know it takes time to get where those guys are at like Wayne (Gallman). I expect my role to be handling kicks, getting in and getting the opportunity when my number is called."

Q: Was it difficult thinking you were going to Auburn to play and then not getting reps?

"It's definitely different for me being a top player and coming into a program and having to wait, but it's a humbling experience. I know that it was best for the team and we ended up with the win and that's all that matters."

Q: What was your favorite moment from that game on Saturday?

"Getting off the bus at the top of the hill seeing 80,000 plus for the first time from that perspective. It was just an amazing feeling and running down The Hill it was just great. So that probably had to be the best moment of it."

Q: How much better does it feel to be at home kicking? Is it less stressful for you as opposed to being at a place like Auburn?

"I wouldn't necessarily say that. It is less stressful. More comfortable I would say. Everybody was talking about how loud Auburn was gonna be, and I still think that Louisville was louder. But they probably won't like me saying that, but it's true.”

Q: How much does adrenaline play a part?

"Oh, a lot. Whenever we were kicking off here, like the first kickoff of the game, I had told myself probably four times running up to the ball to slow down, slow down, because if I pick up too much speed then I am gonna shank it. Either I am gonna get under it or it's gonna be a line drive. I just had to tell myself to slow down.”

Q: How does it feel to know that in a close game the coaches trust you to go in and play at the left tackle spot?

“It feels good honestly. It feels like I have earned it and you know you earned their trust. I'm actually working in the right direction towards competing for that starting spot."

Q: What's the hardest part about acclimating as a student-athlete?

"Definitely timing and scheduling. Cause I am a computer-science major, I’m taking Calculus 1060 class now, and definitely finding the time to get everything done is hard because as an athlete a lot is demanded on you on the sports side and you want to get a good degree. So there is a lot demanded of you on the academic side. But then you also have your life you have to deal with, your family. So really just making time, like cutting your schedule to know what's important and prioritizing has really been the toughest thing for me."

Q: How you feel like you did well in your first time out? What do you feel are things you need to keep working out?

"I think my aggressiveness was like I wasn't really scared to go hit someone. But just a few technique errors just like yielding better on my pass sets and making sure I don't turn my shoulders."

Q: How do you feel you performed Saturday?

"I feel good. I feel really good. I feel like I didn't really leave any doubts on the field, so I felt good."

Q: How do you feel that the defense has performed for two games?

"Excellent. We still have a lot of things to work on and everything, but I feel like we did pretty good."