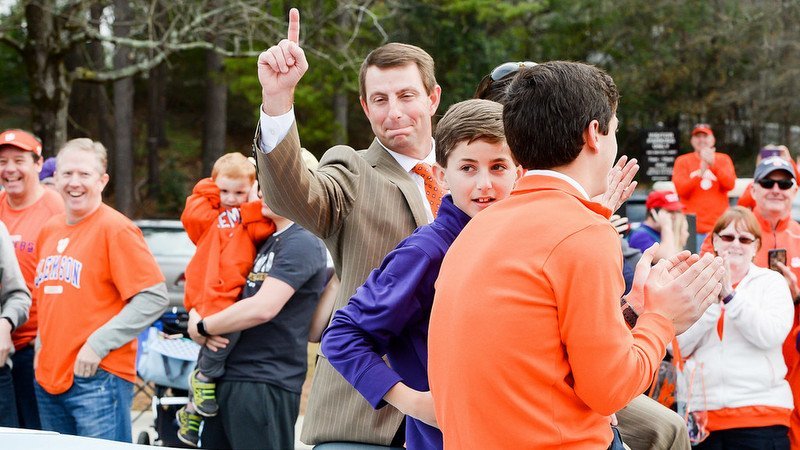 Swinney rides in the championship parade with his family

During last week’s Fort Hill Recruiting Wrap, Clemson head coach Dabo Swinney thrilled the crowd with insider stories of the recruiting process for the Tigers’ 2018 recruiting class, poked a little fun at each player and made everyone present feel like family. That’s what he does.

At the end of his time on the podium, Swinney told the crowd that he was leaving. His middle son, Drew, signed his Letter of Intent to play at Clemson earlier in the day at Daniel High School, and Swinney played the part of the dutiful parent. He snapped photos with his phone, he hugged his wife Kathleen and thoroughly enjoyed playing the part of doting father.

He didn’t get to stick around, however. He made his way back to Clemson to be a part of the festivities on National Signing Day and spent a good portion of the afternoon on camera. He was on ESPN, he held an hour-long session with the local media and did television and radio shows, all followed by the recruiting wrap.

Following the wrap, he could have signed autographs for hours. But he proved that family, the family he preaches to recruits, is a real thing with him. He apologized to the crowd, then told them that he hadn’t had a chance to spend any time with Drew on the big day and he was headed home to spend time with his family.

That’s what Swinney does. Like him. Hate him. Doesn’t matter. He isn’t going to change who he is based on what someone else might think.

We’ve all read the stories about coaches spending the night in their office, agonizing over every little detail of their team. Swinney puts in a lot of long hours – no one will deny he works 100-plus hours a week during the season – but he also makes time for family. He makes sure that his coaches make time for family. During the recruiting wrap, defensive coordinator Brent Venables was captured on camera, both of his daughters vying for a spot with their dad.

Swinney’s formative years were spent with a family that wasn’t always together. When he went away to college, he had to share a room with his mom.

During Swinney’s senior year of high school, he and his mother Carol were almost homeless. Ervil Swinney – the patriarch of the Swinney clan – was going through a rough stretch that saw a failed business venture turn into alcohol abuse. When Dabo went to Alabama to go to college for his freshman year – he wasn’t on scholarship – Carol went with him and the two shared a bed in the off-campus Fountainbleau Apartments. Carol worked odd jobs to pay for the apartment and her son’s tuition, and he worked his tail off to earn a scholarship on the football team.

Opposing fan bases use the shared bed as a punchline. Others who have never known the struggle of eating Ramen every night or living paycheck to paycheck might laugh at it.

Swinney doesn’t notice, and he doesn’t care. It was just another example of family taking care of family. The time he spent away from his brothers and his father made him love the idea of family even more. He’s one of the nation’s top three coaches, but he might be the only one in which winning is secondary to making sure he turns boys into men.

He accomplishes that with family.

As the recruiting wrap ended, the parent of a current player saw me and mentioned Swinney leaving early. “That,” he said, “is why I want my son playing for that man and nobody else. He gets it.”

During the season, the media meets with Swinney after practice to discuss injuries and the game that weekend. It’s the last media availability with the coach until after the game on Saturday, and he’s usually in a good mood. While we talk, however, cars begin to fill up the parking lot outside. People get out of their cars – one or two or three or four or even five – and make their way into the football operations center.

It’s hard not to notice mothers carrying infants and toddlers, to see young children running around laughing and playing. Its family night and all of the family members of the coaches, staff, and players are invited to a big family dinner. Swinney’s wife Kathleen is the de facto mom to those whose mothers live too far away, and she loves them as much as they love her.

Players and coaches who have been away from their families all week get to sit down with their wives and kids and let someone else do the cooking. Presiding over it all is Swinney, now dad to a family larger than he could have ever imagined. His job is to win games, but he wants to make sure that every player knows they are important, that they are loved, and that they can leave Clemson a better person than when they arrived.

And when it comes time to lock up, he heads home with his own family.

He preaches family, but he does more than that. He lives it.