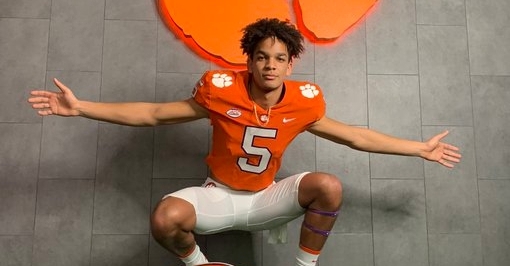 Davis likes what Clemson has to offer.

Clemson’s quarterback room was recently rated as the best in the nation by 247Sports going into the 2020 season. With Bubba Chandler committed as the quarterback in the 2021 class, Clemson has turned their attention to recruiting QBs in the 2022 class.

Braden Davis is one of the two quarterbacks to receive an offer from Clemson in the ’22 recruiting cycle. Davis, a 6-5, 195-pound dual-threat quarterback from Middletown HS (DE), received the Clemson offer on August 3rd from quarterbacks coach Brandon Streeter. Davis is currently a 4-star according to 247Sports, listed as the No. 104 player in the nation, the No. 5 dual-threat quarterback, and the No. 1 player in the state of Delaware. Davis holds offers from the top schools around the country, including Alabama, Auburn, Georgia, LSU, and Oregon.

Davis has become familiar with the Clemson program, most recently taking an unofficial visit to campus in March. Davis has mainly talked with coach Streeter during his recruitment, and Streeter likes Davis’ playmaking ability on the field.

“I’ve been talking to coach Streeter, along with many of the other coaches at Clemson,” Davis told TigerNet. “He (Streeter) likes my decision-making and my ability to make plays with my feet when I need to. Clemson is a place that has great players and they’re elite on the field, but they still have a family culture and they take care of everybody in their program.”

Since starting his communication with Clemson, Davis has been impressed with the way Streeter leads his quarterback room and the Clemson program overall.

“The staff is made up of a lot of great people and elite football coaches,” Davis said. “Coach Streeter is a good guy who leads his quarterback room on great values. Me and coach Streeter have been in contact for a while, so we definitely have a good relationship at this point. I love the culture that coach Swinney leads at Clemson. I love how everybody in the program is pushed to be the best version of themselves, and the staff supports all of the players on the team.”

“Clemson’s facilities are second-to-none,” he said. “They have everything that you would need to maximize a player’s potential while in college. Clemson’s game day experience is awesome as well. It gets very loud in Death Valley and the fans really get into the games.”

Davis’ athleticism impresses on film, making him one of the top dual-threat quarterbacks in the ’22 class. Davis also takes pride in his football IQ and the ability to dissect defenses on the field.

“I feel like when I play football, I play chess rather than checkers,” he said. “I play the game mentally, and I always have the ability to make plays with my feet. Also, I have many intangibles that benefit me as a quarterback and a person.”

Davis said that he would love to visit Clemson again when on-campus recruiting resumes. What is Davis looking for in a school, and what will a school be getting from Davis?

“I want to find a place that I will have the opportunity to compete for the job fairly early on,” Davis said. “I also want a place that will have all of the resources necessary to help me maximize my potential while in college and help prepare me for the next level. They’ll be getting a quarterback who loves the game of football and comes in and goes hard every day.”