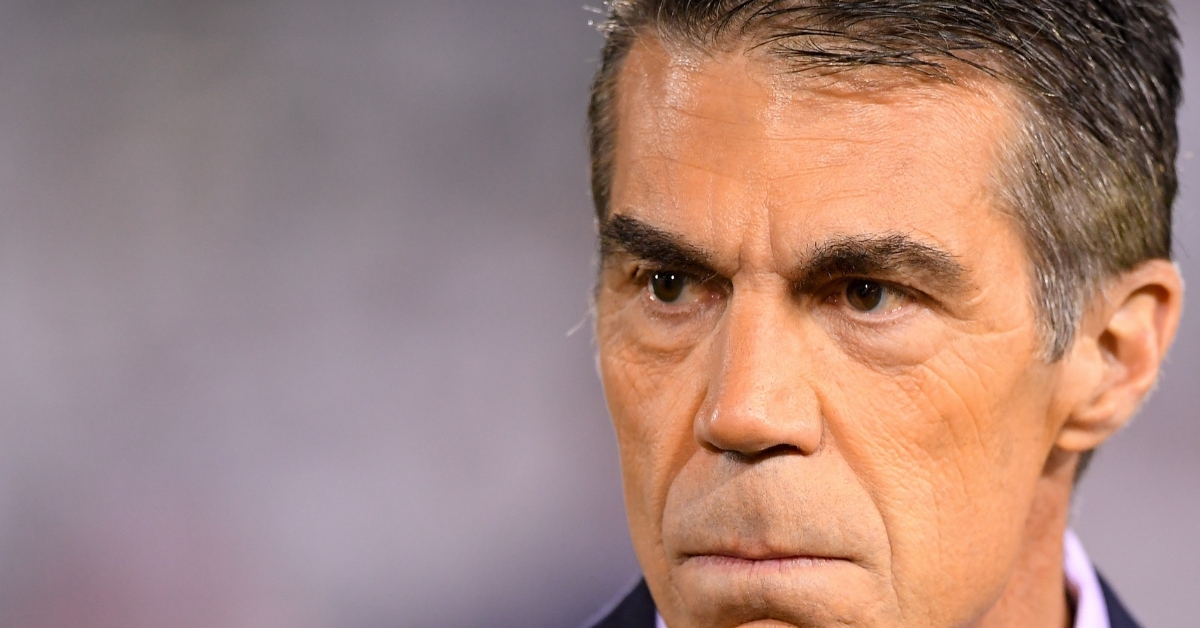 Fowler says the Tigers are favored for a reason (Photo by RIch Barnes, USAT)

SCOTTSDALE, AZ – Chris Fowler says that Clemson is favored in Saturday’s night Fiesta Bowl against Ohio State for a reason. That reason? The Tigers are the better football team.

No. 2 Ohio State and No. 3 Clemson tangle in the College Football Playoff Semifinal in Glendale Saturday. The winner advances to play the winner of the Peach Bowl’s contest that pits No. 1 LSU against No. 4 Oklahoma.

Clemson is currently a narrow two-point favorite over the Buckeyes in a game that features a plethora of star power.

“It does because of the qualification of the two teams. I look back at games in the past that have had this much star power with teams that roll in with winning streaks like this, and the only parallel that I've found that I've covered was the Texas - USC Rose Bowl,” Fowler said. “The star power of those two teams - Vince Young, Reggie Bush, Matt Leinart and both on huge win streaks. Obviously, that was a championship game. This isn't so it can't feel the same, but you talk about 28 versus 19 (consecutive games won), five of the top nine vote-getters in the Heisman Trophy. It's got individual star power.”

Fowler said these two programs have been on a collision course all season.

“It's got two teams on a collision course," Fowler said. "It's got history. Clemson is chasing something that's very special in the history of the entire sport - three out of four. Ohio State is trying to get back to where they think they belong. In terms of storylines and star power, I haven't seen many like this.”

Fowler was asked if he thinks this is a “toss-up” game and he said the Tigers are favored for a reason.

“Toss-up game? There are no true toss-up games. You have to find that edge somewhere. I think Clemson is favored for a reason, to be honest with you,” Fowler said. “You can count on the guys who are the core leaders of that team, especially on offense, kind of delivering in a big game. I don't discount that (Trevor) Lawrence and (Travis) Etienne and a lot of those guys who were a part of the championship last year have put together an almost perfect performance in a championship game against Alabama and beat them by four touchdowns.

“For Ohio State, they answered a lot of questions against Wisconsin coming off the canvas in their first real postseason game for that group of guys. To me, I wouldn't bet against Trevor Lawrence in these situations. I think Clemson is favored for a reason but it doesn't mean it's not a very close, competitive game. We sure hope it is. We're all here to see a close game.”

The Tigers have reached the playoff each of the last five seasons and have won two of the last three National Championships and Fowler said that experience means something.

“I think it counts a lot. In 30 years of doing this, I've seen plenty of postseason games won with experience and just a steady hand on the big stage,” Fowler said. “You talk to all of the players and coaches who have been through this and there's a jump in intensity from the regular season to conference championships. There's another jump to the semifinals and another jump to the championship. If you don't come out and match that energy and intensity early on and then sustain it, you don't win.

“I think Alabama got caught last year in a Clemson avalanche. The Tigers came out made big plays early, got momentum going and Alabama sort of tapped out, which is something we hadn't seen before. If you can make Alabama tap out, you can do anything in this sport. I think for that reason, Clemson is a proven commodity in that department. Ohio State needs to be very aware early on and come out and execute well, be intense and impose themselves and not get punched in the mouth quickly because I think we can see playoff games get away from one side if they're not ready from the jump.”

Head coach Dabo Swinney said he thinks the two programs are mirror images of each other, but Fowler doesn’t agree.

“That sounds like the sort of thing coaches say in a press conference. I don't think they're mirror images. I think they each bring talent,” Fowler said. “I think the way they're built is very, very similar. They're built with elite, elite talent - four and five-star players and recruiting classes that are at or near the top every single season and then they're developed spectacularly with resources at both programs that are unsurpassed in this sport. From that standpoint, I think both programs - one in the north, one in the south - are built very similarly and they've dominated in very similar fashions, but mirror images mean their identical and I don't see that.”