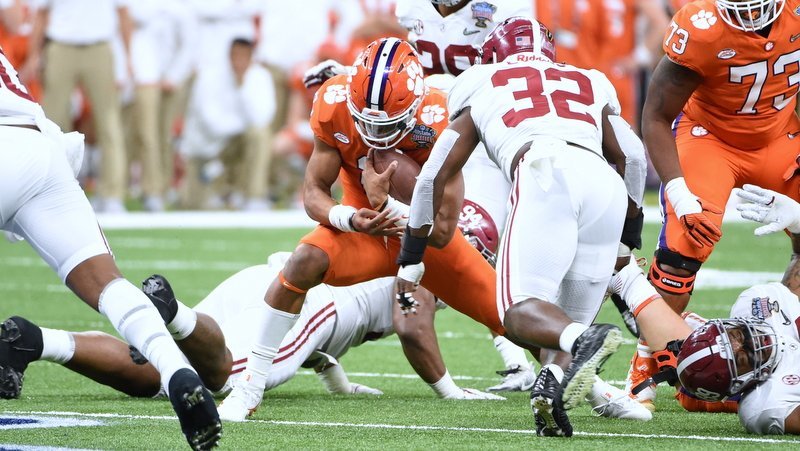 NEW ORLEANS, LA – Beatdown. Domination. Thrashing. Call it whatever you want, but No. 4 Alabama proved it belonged in the College Football Playoff Monday night by rolling over top-ranked Clemson 24-6 in convincing fashion at the Allstate Sugar Bowl at the Superdome.

Alabama, now 12-1 on the season, will advance to play Georgia in the National Championship Game in Atlanta next Monday. The Crimson Tide simply out-played and out-coached Clemson in every facet of the game.

Clemson’s offense was inept for most of the night, with two third-quarter interceptions particularly costly as the Crimson Tide completely flipped the momentum. Clemson finishes the season 12-2 but will have to spend an entire offseason wondering how they could look as utterly helpless as they did Monday night. The last time Clemson was held without a touchdown was back in 2014 in a loss at Georgia Tech.

Quarterback Kelly Bryant was ineffective, but he wasn't helped by his offensive teammates - the offensive line struggled to block and receivers dropped catchable passes. Bryant finished the night 18-of-36 for 124 yards and two interceptions. The Tigers finished with 188 yards, many of those in the fourth quarter after the game was out of hand.

"Obviously, I'm very disappointed. We came here to win and just incredibly disappointed in our performance," head coach Dabo Swinney said. "But the credit goes to Alabama. Congratulations to Alabama. They were the better team today. No question about it. And we had opportunities, just really had awful field position at the first of the game. I think their first three possessions were right around the 50, the kickoff return, and our punt team, our punting. We did not punt the ball well and flipped the field when we had opportunities. But just really disappointing in the first half, especially."

Swinney said the Tigers managed to keep it close despite the mistakes.

"But as bad as we played, we still had an opportunity. I thought our defense kept us in the game and really played pretty good. They only had 260 yards, I think," he said. "Those good backs, we knew that was going to be a big challenge for us. They had about a hundred yards rushing, the two combined for that. We did some good things. I was proud of Alex [Spence] for making a couple of kicks. A young guy going out there in that setting making a couple of kicks is something he can build on. But at the end of the day, championship football is a game of a few plays, especially when you're playing Alabama. Alabama is the number one scoring defense in the country for a reason. And you have to make the critical plays, and we didn't

"We did it last year. We didn't do it this year. We had some opportunities. We had a big drop on third down early in the game. We got a chance in the

second half. We come out, and we get the turnover, and we got a chance. It's a 10-6 game. And we've got the right call, no safety defense. We got a post route probably getting ready to throw it for a touchdown. And we get a sack, fumble, catch, and a penalty. It's like a 42-yard play."

The Clemson offense sputtered on each of the first two drives, and Alabama took advantage of a short field on its second drive with a 24-yard field goal to go ahead 3-0 with 5:23 to play in the first quarter.

Clemson went backward on the first two plays of the ensuing possession and faced a third-and-long. Bryant escaped the pocket and found a wide-open Deon Cain over the middle of the field. Cain had first down distance and could have run more yards, but dropped the pass and Clemson was forced to punt.

The Tide once again took advantage of a short field, moving the ball 46 yards in eight plays. Hurts found Calvin Ridley on a 12-yard touchdown pass and Alabama led 10-0 late in the first quarter.

The Tigers finally responded on their next drive, covering 54 yards in 13 plays. Cain had two big catches on the drive and Alex Spence capped it with a 44-yard field goal that snuck over the crossbar. Five minutes into the second quarter, Alabama led 10-3.

Clemson failed to capitalize on the momentum, and Alabama put together another nice drive at the end of the half. The Tide drove down the field, but missed a 37-yard field goal that hit the left upright with 17 seconds left on the clock.

Clemson finally got a break to start the second half. The Tide took over at their own 22 and Hurts tried to pull the ball out of the belly of the running back on the read option, pulled it late and fumbled it. The ball was recovered by Kendall Joseph at the 20, but the Tigers couldn’t put the ball in the end zone and settled for a 42-yard field goal by Spence that made it 10-6 early in the second half.

The Tigers forced another Tide punt and then put together a nice drive that reached the Alabama 43. However, Bryant was hit on a pass play and it was intercepted by Daron Payne and returned into Clemson territory. A personal foul call gave the Tide the ball at the Clemson 27, a change of field position and emotion from just a few plays earlier.

Alabama made Clemson pay when Hurts found Payne – the big defensive tackle that had the interception – on a one-yard scoring toss that made it 17-6 with 5:40 remaining in the game.

It took Alabama exactly one play to put the game away. The Tigers once again started with a short field, and on the first play Bryant’s pass was tipped and intercepted by Mack Wilson. Wilson returned it 18 yards for a touchdown and a 24-6 lead.

Clemson threatend to put a late score on the board, but Bama held on a 4th-and-goal at the six with 1:43 remaining.

Clemson Vs. Alabama - Final Stats
Get the latest Clemson gear right here!
Comment on this story