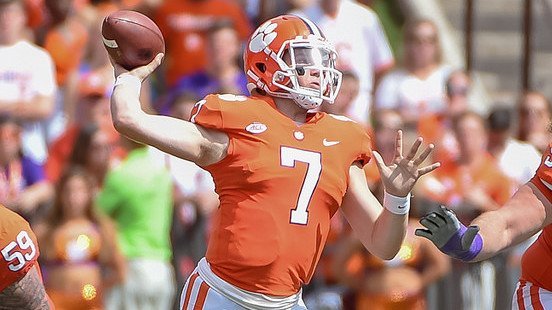 CLEMSON – Chase Brice doesn’t have the size of Dexter Lawrence or Christian Wilkins, and his blonde hair is close-cropped. Brice walks around the Clemson campus largely unnoticed by the general population, but his visibility grew after leading Clemson to a come-from-behind victory over Syracuse last weekend.

That visibility should continue to grow – Brice loves Clemson and says he will stick around no matter where he sits on the depth chart.

"I think, mainly, I got redshirted - so, this year was a good opportunity during spring practice and fall camp to really showcase what I can do,” Brice said. “There was no need for me to leave. I love the coaching staff. I love Clemson in general, the school aspect. Great people and a lot of friends and my family loves it as well. And the football is great - you're getting coached by Coach Swinney who is one of the best in the country. That's what made me want to stick it out."

"A couple of days after Hunter (Johnson) committed, I decided to commit. I knew they were taking two quarterbacks, but it just hit me that this was the spot I wanted to be. I didn't know if Trevor (Lawrence) had committed or not. It was just a place where I wanted to be, and I knew I would strive at - it helped me to become a better man, a better person, and a football player."

The last few days have been fairly normal for the redshirt freshmen, even though a few people recognized him on campus.

"Outside of social media, it's been pretty normal. It's been a fun couple of days. I'm just glad we got the win,” Brice said. "I still kind of walk through crowds on campus. I don't really tower over anybody or things like that, I'm not that noticeable, but some people do recognize me on campus."

If the Tigers need Brice against Wake Forest – Clemson’s next opponent – Brice will once again be ready.

With just over six minutes left in the game Saturday, the Tigers needed at least a field goal to tie the game. However, a punt downed on the six meant Clemson faced a long drive to pay dirt.

"I didn't really try to think about going the whole 94. I was really just focusing on getting first downs. I knew there was plenty of time on the clock - we had a couple of time outs - and we knew we were gonna gain yards with our running game, so I was pretty confident in that,” Brice said. “It just happened where we got in a rhythm, and 94 turned into only six more yards to go.

"I think we went pretty far, almost the same distance, on an earlier drive. So, I just told the guys, 'Look, we did it once before. Let's just go ahead and do it again.' They were all on board. The offensive line wanted to run it and pound it down their throat. When they started saying that, it just brings a lot of confidence to you and your running back and your coaches for a veteran o-line to do that."

Perhaps the most clutch of the Clemson season to date came on 4th-and-6 near midfield – Brice hit Tee Higgins for a 20-yard gain that will forever be etched in Clemson lore.

“Fourth-and-six. I knew I had Tee. I knew that on third-and-long and medium on fourth down they ran a specific coverage,” he said. “I tried to look off the safety a little bit, and I knew I was going to either Tee or the flats. The corner didn't really sink that much and gave just enough room to fit it in there to him."