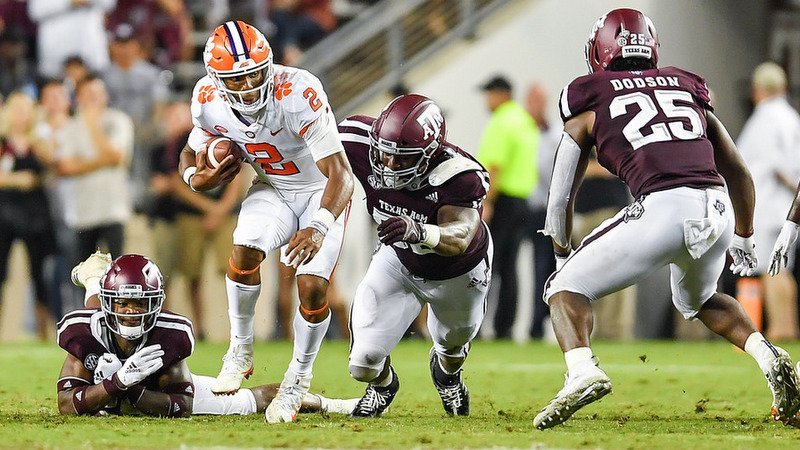 CLEMSON – The Clemson offense struggled for much of Saturday's win over Texas A&M, continuing a trend that started last season when the Tigers finished a disappointing 38th in total offense. For things to improve, the defense has to loosen its grip on the Tigers’ running game.

Co-offensive coordinator Tony Elliott spoke with the media Monday and he was asked about the offensive struggles. Elliott said teams are loading the box to take away the running game, and more explosive plays down the field will have to happen before the defenses take notice.

“He (A&M defensive coordinator Mike Elko) did a really good job. What he was going to do was get seven people in the box and get to a one high (safety) structure and he wasn’t going to give you much going down the middle of the field. So you were going to have to take the things on the perimeter. With him being able to get that seventh defender in the box and blitzing the interior linebackers he was able to contain with the ends. He was basically bottling up the run game up the middle so you had to have the ability to throw the ball on the perimeter and we just found ways to make plays.”

Elliott said he expects teams to continue to play a similar style of defense, at least until the Tigers establish a downfield passing game.

“It goes back to being explosive and now they are going to have to respect Tee Higgins. There was some unknown last year and we took shots down the field, but just didn’t connect at a high of a rate. Now you are seeing we're connecting and the quarterbacks put the ball where it needs to be. Those guys can make plays. We have to do a great job of getting the ball out on the edge with our perimeter screen game. They did a really good job of playing physical at the point of attack out there, so we just have to continue to improve.

While Clemson came away with the 28-26 victory, Elko – who spent time at Wake Forest – and head coach Jimbo Fisher – who was previously at Florida State, showed that the offense was a mixed bag of good and bad.

“Start with the positive, that’s two weeks in a row with no turnovers. With the exception of the delay of game, procedure-wise going into that environment I thought they handled that very, very well. When you look at the film, there wasn’t a lot of missed assignments, Elliott said Monday morning.”Now transition into the negative. We just didn’t play clean, we had some technique issues that we have to clean up. I think guys were headed in the right direction, but at some positions, the inexperience showed up and that put us behind the chains. Once we were behind the chains, its hard to convert third-and-longs. We had success early, but you can’t live in the third-and-long all night.”

Things weren't all bad for the offense, and Elliott was pleased with the way his group responded in a tough environment.

“Back to the positive – I thought we had some explosive plays, especially in the passing game and in the run game. Really pleased with Kelly Bryant’s poise, obviously inconsistent at times, but his leadership and maturity really showed up. Good to see Trevor (Lawrence) jumping in that environment, it seemed like he wasn’t fazed. He still has some things to learn and going through. Those are things that jump out at me the most. Obviously, excited to win. You go on the road in that environment with so many unknowns. You have to tip your hat to Elko. He did a really good job and changed some things up. He was determined not to give us the perimeter or the inside run. It took us a little while to figure it out and we played cat and mouse, but just pleased with the way the heart of the champion came out in our guys and we found a way to win.”