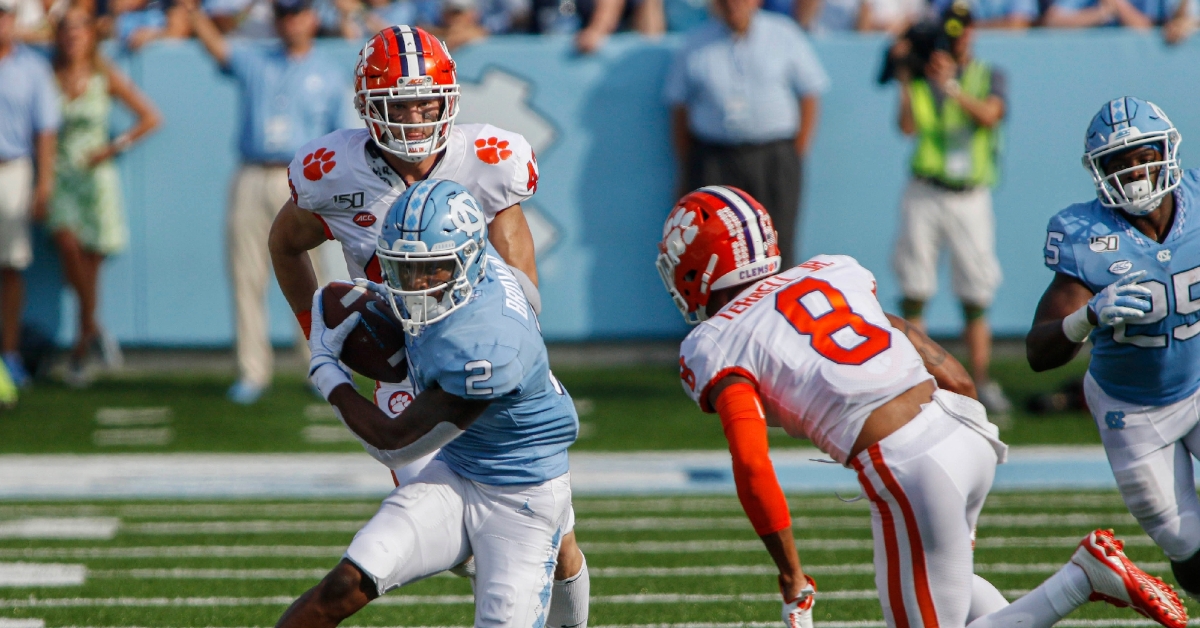 AJ Terrell zeroes in on a tackle (Photo by Neil Redmond, USAT)

CHAPEL HILL, NC – A two-point conversion stopped by the defense may have saved Clemson’s season.

The No. 1 Tigers stopped North Carolina’s two-point attempt with 1:17 to play and survived a trip to North Carolina with a 21-20 victory Saturday afternoon at Kenan Stadium. Clemson improves to 5-0 overall and 3-0 in the ACC with the win, while UNC falls to 2-3 overall and 1-1 in the league.

A 16-play drive by the Heels ended with a one-yard touchdown run with 1:17 to play and UNC elected to go for two and the win but the run was stopped short of the goal line and the Tigers were able to hold on for the win in a game marred by a critical turnover and six pre-snap penalties.

"Unbelievably proud of our guys for finding a way to win," Clemson coach Dabo Swinney said postgame. "That's what it's all about and obviously made enough mistakes to lose the game. I'd probably say they probably outplayed us and we started -- we had a lot of mistakes. A lot of critical, critical errors at critical times but when we had to make play -- we made it and that's what winners do. So just really proud of our guys and you know this is a game that we certainly can learn a lot. We will grow from it.

"I mean it's not easy to win. I know we're supposed to just show up and beat everybody by double digits and you know all that, but this is college football and you know we're a new team. This team is learning and growing and so first of all really proud of our guys. Just gutsy. Again a lot of mistakes had to overcome but we had to make the plays. We made two plays -- just an incredible play there at the end of a two-point play so that's the first thing."

Clemson won the toss and elected to defer, and it didn’t take the Heels long to score. A 26-yard screen pass on third down set up a 40-yard touchdown pass from Sam Howell to Dyami Brown. Brown put a subtle double move on A.J. Terrell and Howell hit him in stride for the easy score. Barely two minutes into the game UNC led 7-0.

Clemson had a chance to score on its opening drive, but B.T. Potter’s 40-yard field goal attempt went wide left.

The teams traded punts over the next few series but the Tigers finally found a rhythm. Taking over at their own 11, Clemson put together a 10-play, 89-yard drive for the score. A 16-yard pass to Tee Higgins and a 31-yard pass to Justyn Ross set up Etienne’s 13-yard touchdown run. With 12:43 to play in the half, the score was tied at 7-7.

Clemson forced a North Carolina punt and picked up a quick first down, but Etienne fumbled the ball back over to UNC and the Heels took over at the Clemson 42. A 31-yard run by Michael Carter gave the Heels first-and-goal at the nine. Three plays later Howell flipped a 10-yard scoring pass to Beau Corrales and UNC led 14-7 7:55 to play in the half.

The teams once again traded punts and Clemson took over at its own 22 with just over five minutes to play. A 16-yard run by Lawrence and a 31-yard pass to Ross put the Tigers in UNC territory. Facing a crucial third down, Lawrence was flushed from the pocket and moved towards the right sideline before throwing a 16-yard dart to Higgins on the sideline. A few plays later Lawrence carried the ball in from four yards out and the score was tied at 14-14 with just 33 seconds remaining in the half.

The third quarter was a mess – Clemson had 57 total yards and UNC had just 20. The Tigers had a promising drive to start the third quarter, but procedure penalties killed the drive and Clemson turned it over on downs.

UNC put together a decent drive early in the fourth quarter and faced a 4th-and-1 at the Clemson 45. UNC head coach Mack Brown – with his defense playing well – elected to go for it but the Heels were stopped for no gain and Clemson took over on downs.

Six plays later Lawrence threw a strike to Higgins down the left hash for a 38-yard scoring toss and Clemson led for the first time on the day. With 9:54 to play Clemson led 21-14.

The Heels responded with a long scoring drive that took the heart out of the Clemson defense, marching 75 yards in 16 plays and took over 8:35 off the clock. UNC converted on fourth down twice on the drive and got the touchdown on a one-yard dive from Javonte Williams for the score. With 1:17 to play, Brown elected to go for the two-point conversion and the possible win, but James Skalski and Xavier Thomas stopped the wide pitch a few yards short of the goal line and the Tigers led 21-20 with 1:17 to go.

"North Carolina, man, I mean what can you say about that group," Swinney said. "I mean unbelievable effort and you know that's what happens when you give a team momentum and suddenly they're in a game like that. I thought their plan was excellent."

Ross gathered in the onside kick and the Tigers ran out the clock.

Clemson safety Tanner Muse left with a leg injury after the first half and Swinney did not have an update on his status going forward afterward. Muse was walking around the sidelines without his helmet in the second half.

Clemson is off next week and returns to action on Oct. 12, hosting Florida St. UNC travels to Georgia Tech for a 4 pm kickoff.

Clemson vs UNC Box Score
Get the latest Clemson gear right here!
Comment on this story