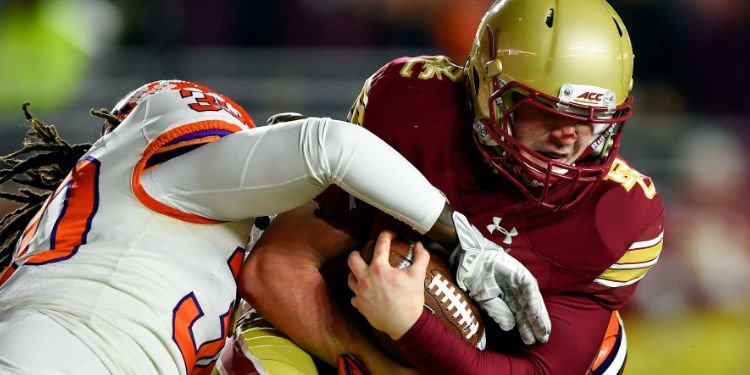 Yes, it was cold. Yes, the wind was blowing. Yes, Trevor Lawrence had never been north of Virginia. Yes, Clemson usually plays in warm temperatures.

In spite of all the weather conditions, Clemson came to play like it was 70 degrees and sunny and took care of business beating No. 17 Boston College 27-7 in front of a sold out crowd at Alumni Stadium Saturday night.

Clemson head coach Dabo Swinney said that after listening to all of the reporters, he was afraid his team may forget how to play football due to the frigid weather conditions.

“I was nervous about the weather. I thought it was going snow or sleet. I was a little disappointed that it was a balmy 38 out there,” Swinney said during his postgame press conference. “I didn't know what was going to happen, listening to all of the reports and that stuff. I thought we didn't know how to play football because of the weather. Trevor had never been North to play football and all of this stuff. Lord have mercy, most people didn't do their homework. Since 1961, Clemson was 5-0 in games in less than 40 degrees and now 6-0, so I don't know. That's the only thing I was worried about that we were going to freeze up and forget how to run and tackle and all of that stuff, but somehow and some way we were able to push through it.”

As it turns out, it’s just football no matter the temperature, even for a freshman quarterback from Cartersville, Georgia. Trevor Lawrence – the game’s MVP – completed 29-of-40 passes for 295 yards and a touchdown.

Amari Rodgers – who sealed the game with a punt return for a touchdown – credited the team’s leadership for how they handled the weather and the atmosphere.

“We didn't let any of the weather or any of the outside stuff affect us. We knew we had a job to take care of and we did a good job this week preparing for the team,” Rodgers said. “I felt like that just shows our maturity and our leadership that when we come into a hostile environment like this we can take care of business.”