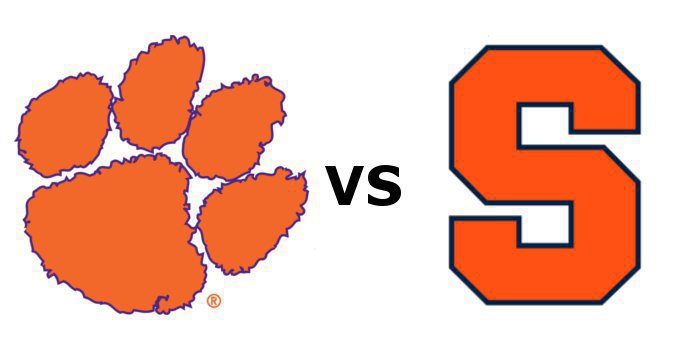 One more game and the Tigers get their first break since late July.

But that one game won’t be easy as No. 2 Clemson travels to New York to take on Syracuse in a rare Friday night ACC matchup. Can the Tigers survive a trip to the Carrier Dome? Will quarterback Kelly Bryant be healthy enough to start and play the entire game?

*Larry Czonka Nearly a Clemson Tiger? All-time Syracuse great Larry Czonka visited Clemson during his recruiting process in 1963 and had the Tigers in his final four schools. According to his Wikipedia page on the internet, Czonka considered Clemson, Vanderbilt, Iowa and Syracuse. Recruited by Clemson Coach Frank Howard, Czonka would have been a freshman at Clemson in 1964 and then played in 1965- 66 and 1967. Even without Czonka, that was a great era in Clemson football history as the Tigers won the ACC all three years. Czonka went on to a great career with the Miami Dolphins and New York Giants. He is a member of the Pro Football Hall of Fame and the College Football Hall of Fame.

Prior to last year, the last time Clemson won a Friday night game was in 1952, a 13-0 win over Boston College at Braves Field. Clemson has played more games on Fridays in the regular season over its history than one would think. This will actually be the 44th regular season game in Clemson football history played on a Friday. The Tigers are 24-14-5 in Friday regular season games.

Senior wide receivers Steve Ishmael and Ervin Philips remain the top active FBS receiving duo in the nation. The pair have combined for 356 receptions in their collegiate careers. Ishmael currently leads the country in receptions per game (9.3), while Philips ranks fourth (8.7). Through six games, Ishmael leads the nation in receptions (56) and receiving yards (729).

The defense is playing better than it did last season. Syracuse has held its opposition to 24.3 points per game this season, an improvement of 14.3 points per game from last year (38.6). Opponents are 1-for-27 (.037) on third down in the first half of games played in the Carrier Dome this season. Last week against Pitt, Syracuse did not allow a third-down conversion until the fourth quarter. The Orange are third in the ACC and sixth nationally in third-down conversion percentage defense (.247).

If the Tigers come in flat, Syracuse is dangerous enough to pull off the upset.

Clemson boasts one of the nation’s top defenses. Through six contests, the Tigers lead the ACC and

rank fifth nationally in scoring defense, holding their opposition to 11.3 points per outing. The team also leads the league and ranks fifth in the country in sacks at 3.67 per game.

Clemson is one of just three teams in the nation averaging at least 230 yards rushing and 230 yards passing. Ohio State averages 245 rushing and 322 passing, while Oregon has 239 yards a game rushing and 254 passing. That balance has led Clemson to a 6-0 record overall and they are 4-0 in the ACC. As long as Clemson protects the football, they have an overwhelming advantage in spots. Syracuse will start two freshmen on their offensive line, not a recipe for success against Clemson’s front four.

Syracuse head coach Dino Babers is one of my favorite ACC coaches, and I think he’s a fast-rising star in the coaching ranks. The Orange appear to be better-coached than they’ve been in years past, and he’ll have a few tricks up his sleeve. Add in a big crowd and Clemson looking ahead to the open date, there are a few signs that point to a Syracuse upset.

Won’t happen. The Cuse offense will hit a few big plays, but their offensive line won’t be able to generate much of a rush and protecting Dungey will be a chore all night. Whether Bryant plays or not, the Tigers will be able to run the football and hit a few big plays. In other words, we might see a carbon copy of Clemson’s earlier games – the offense gets a lead, the defense smacks the other team around, the reserves come in and give up a late score or two.