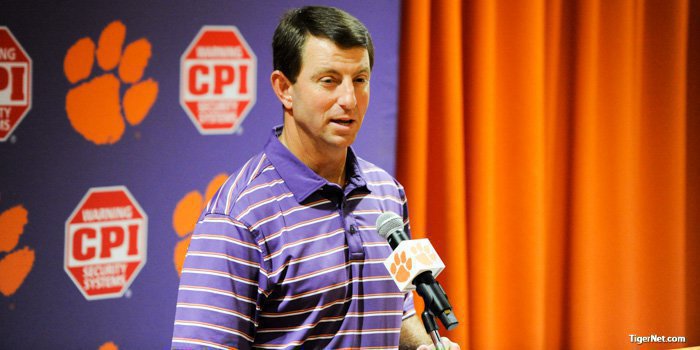 CLEMSON – Crazy good. That might be the best way to describe Louisville quarterback Lamar Jackson and the Cardinals’ offense.

No. 2 Clemson (coaches poll) takes to the road this weekend, traveling to Louisville for a matchup with the 14th-ranked Cardinals. Both teams are 2-0 and have designs on an ACC Atlantic Championship. Clemson defeated Auburn 14-6 last weekend while Louisville defeated UNC 47-35.

“I'm really proud of our team for being 2-0 and for how they competed in a hard-fought game against a very good team - a team that I think is going to have a great year and win a bunch of games,” head coach Dabo Swinney said during his Tuesday press conference. “Proud of our guys. It's really the start we were hoping to have. Really excited about another challenge this week. Louisville is an outstanding team, a difficult place to play, GameDay is heading up there, an 8:12 kick. It's exciting and really looking forward to it. To me, that's what you come to Clemson for - to be a part of games like that in great environments.”

Swinney said the Tigers have a lot of respect for Louisville’s “crazy good” offense.

“Got a lot of respect for Louisville and their team. We've had some incredible battles with them, and I don't expect this one to be any different,” Swinney said. “Offensively, they're crazy good. It's video game numbers. It's unbelievable the numbers. They're averaging 614 yards a game and 7.6 yards per play. That's incredible, and they've played two pretty good games and two teams that they've had to put up those numbers. Just impressive. Lamar Jackson is an unbelievable football player. He's fun to watch. He's not fun to prepare for. He's not fun to play against. I much prefer to watch him. I enjoy that a lot better. We've got our hands full with this guy. What a player. He's averaging 505 yards a game. Averaging in two games. Big challenge for the Tigers this week as we get ready to head up there.

“Defensively, the biggest thing that jumps out is all of the guys back who have played a lot of football for them. I think they've got 12 or 13 guys that started for them at some point last year. I think nine full-time starters are back off of last year's defense. It's a really good group. They're big, and they're strong up front. They've got a corner - No. 10 (Jaire Alexander) - is a really good football player. I know he got hurt so I don't know if he's back or not. What a player. He's also their returner. They've got good quality people all across the board. Another big challenge for us going against a great defense at their place.”

ESPN’s College GameDay will be on site, and kickoff is set for 8:12 p.m.

“We're looking forward to it. This is a fun game to prepare for because you know every play is so critical,” Swinney said. “You've got to make your opportunities count and then just the challenge of playing against the Heisman Trophy winner. That's something you get excited about because you want to play the best. What they've done offensively is pretty special to see. Look forward to seeing how we match up and how we do under the bright lights Saturday night.

"Marcus (Edmond) did not practice yesterday. He's still dealing with the foot sprain, and he's day-to-day. We'll see how he does today. Van (Smith) did practice and looked good," Swinney said.