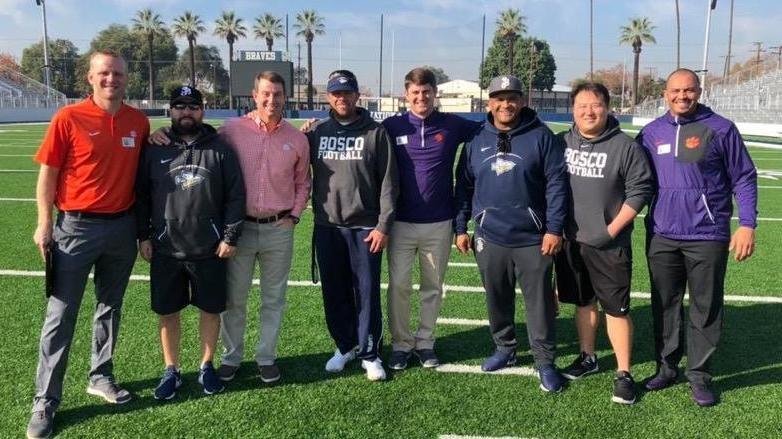 CLEMSON – If you see a pretty girl walking down the street, you don’t wave and ask her to marry you right away. Why? Because you have no idea what you’re getting yourself into. It’s the same thing with recruiting, according to Clemson head coach Dabo Swinney.

No. 2 Clemson doesn’t offer everybody, and the prospects that receive those offers have been deemed as the kind of player that the Tigers want in the program. The offer doesn’t come right away – even if you’re Trevor Lawrence – and it’s one of the reasons that Clemson doesn’t allow official visits during the spring.

“We've never done any. That’s where we are as a program," Swinney said Wednesday. "I mean, it’s easy to get on a plane and fly here. You may not have any interest in Clemson whatsoever, but if Clemson calls and they want to pay for you to come and feed you, put you in a hotel, well who don't want to go do that? Sign me up. Let's go man and get a get a weekend. Let's go.”

Clemson has extended a mere 165 offers during the 2019 recruiting cycle. Only 112 went out for the smaller 2018 class. South Carolina extended 245 offers in 2018 and 235 in 2019, while Tennessee extended a whopping 440 offers under new head coach Jeremy Pruitt for 2019. Syracuse and Dino Babers extended a staggering 437 offers.

“I'm always trying to slow it down and I don't like offering a bunch of kids that I don't know a whole lot about,” Swinney said. I want to know. I just want to. I want to know who they are and again, I want to be prepared to accept the guys' commitment. I had a, a great prospect in here the other day. I told him, if I offer you right now and you commit to me, I I don't even know you. I just met you. I mean, we know nothing about each other and I'd like to. I mean, can you play two years of varsity football first?

“Maybe drive a car? Let's talk a little bit. I don't think that's too much. That's where recruiting is going. And I'm trying to always pump the brakes. There's no ninth or 10th grader that gets an offer from Clemson unless it comes from me. So, if you ever read about that, that's not accurate. It can only come from me and we've had plenty of those guys. But there are guys that I know, I knew them. They've been in our camp. And I told Trevor (Lawrence) as a ninth grader, I cannot offer you a scholarship. I told him in my office, right over there. I said, I know you probably never gonna come back here again and I know you've got 50 offers, but I don't know you, I just met you. After I watched him in sophomore year and he came in, I'm like, you know what, I like him. Let's go on him. But that came from me, you know?”

In other words, you don’t throw out marriage proposals unless you know the other person.

“But that's what happens in recruiting. Here comes this beautiful lady walking across the street, and you say, hey will you marry me? What if she says yes,” Swinney said. “Well, she might look good, but you might hate each other. You know what I'm saying? Who does that? But that's what happens in this recruiting process. You just throw a million offers out there and I don't like that. I want to know who we're going to be a part of. We don't sign JUCO players and we don't sign grad transfers to come in here and be one-offs.

“We don't do that. So we better be right. I want guys that are sincerely interested in coming to Clemson. I don't like wasting time. I want to be transparent and I want prospects to be transparent. If they're really interested in Clemson, then they're gonna come here unofficially on their own. And so, my message to the staff was they won't come unofficially. And, so that's just my personal philosophy. Because again, I think when a guy comes unofficially , then to me is sending you a message that, you know what, I'm interested in Clemson now. He may hate it when he gets here, but, but at least he came on his own. And so that's just my personal philosophy.”