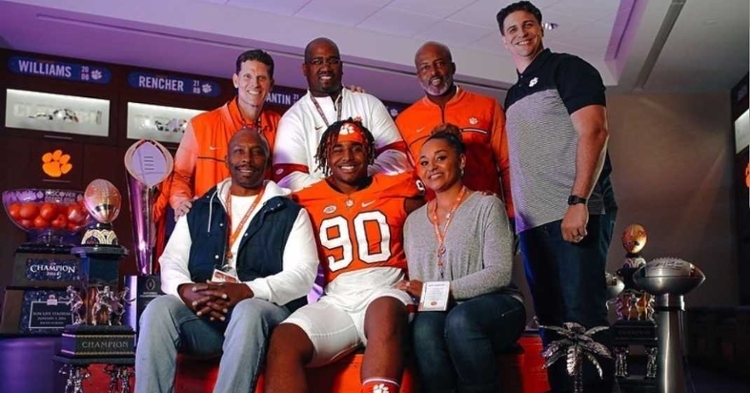 Dabo Swinney’s Roaring 20s are off to a roaring start thanks to what might be the best recruiting weekend in Clemson history.

Buckle up, because Swinney is telling recruits that while the previous decade was the best in terms of Clemson’s accomplishments, he’s wanting the next decade to rank among the all-time greats.

With the addition of Foreman, Clemson now has commitments from the top overall prospect in the Rivals 150 three out of the last four years (Trevor Lawrence, 2018; Bryan Bresee, 2020; Foreman, 2021). Clemson doesn't have a commit rated below a four-star in the 247Sports Composite with four consensus top-100 prospects in Foreman (1), Collins (34), Denhoff (91) and Marcus Tate (94).

The Tigers finished 2010 with a 6-7 record after a Meineke Car Care Bowl loss to USF, but Swinney and quarterback Tajh Boyd stood in the hallway underneath the stadium that day and vowed to make Clemson a national power. As Boyd told us that day, “this won’t ever happen again.”

Clemson kicked off a run of nine consecutive seasons with double-digit victories with a 10-4 mark, an ACC title and a trip to the Orange Bowl. A loss to West Virginia in that game led to the hiring of current defensive coordinator Brent Venables, arguably the best at his job in college football.

Clemson concluded the 2010s with a record of 117-23 (.836) in seasons in the decade. Clemson’s mark in the 2010s represents only the fourth time a program has won 117 games in a decade in major college football since 1890, joining Penn (124 in the 1890s), Alabama (124 in the 2010s) and Ohio State (117 in the 2010s). There were six ACC Atlantic Division titles and Atlantic Coast Conference titles, five consecutive appearances in the College Football Playoff and two National Championships.

I asked Swinney about that era during the College Football Playoff and he indicated that he wanted the 20s to be even better.

Swinney told the recruits this past weekend that the Roaring 20s were going to be better than the Terrific Teens.

“The photo shoot was fun, but it was fun listening to Coach Swinney and hearing his vision for the program. That was the most fun part,” Denhoff said. “He said the previous decade was one of the best in college history, not the best, and he said he wanted the next decade to be even better. It makes you realize that this is a program focused on winning games and while you are there you might be a one or two-time National Champion. That is exciting.”

I thought that the decade was off to a great start with the 2020 recruiting class (which still isn’t closed but is close). I’ve seen almost every one of those players in action at some point or another, and I don’t mind telling people that it’s the best recruiting class I’ve ever seen. It has star power, it filled needs, it replenished the depth chart and built for the future."

This one has a chance to be even better, and that’s just scary for opponents.

Clemson has always recruited its sweet spot – South Carolina, North Carolina, Georgia and Florida. However, in recent years the coaches have gone out to Kansas to get Isaiah Simmons, Connecticut to get Christian Wilkins and Ohio to get left tackle Jackson Carman, just to name a few. The recent class has defensive back R.J. Mickens out of Texas, but the Tigers have expanded their reach even further.

Foreman and Collins join wide receiver Joseph Ngata, who in 2019 became Clemson’s first signee from California since 1991, and D.J. Uiagalelei, a recent mid-year enrollee and a five-star quarterback in the 2020 class. Getting the best players out of Georgia is one thing, but to go to California and take the best players out from under the noses of USC and UCLA and other historical programs shows exactly what the Clemson brand means.

And that previous decade? That means these kids – even in California – have grown up knowing Clemson only as a national power, not the Clemson of the Tommy West years. Clemson has done it with really good recruiting classes, but not the No. 1 class and not with talent like this.