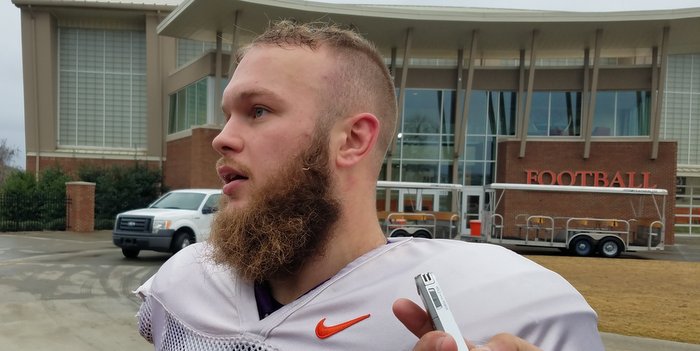 CLEMSON – Ben Boulware knows the number of practices he has left in his Clemson career is limited, and even though the Fiesta Bowl is still over two weeks away he wants to take advantage of each and every second.

Why? The easy answer is that he’s a competitor. But dig a little deeper, and you’ll find a team leader who doesn’t want to deal with the stress of losing in the playoffs again. He doesn’t want to feel the pain and the sting of another title game loss.

That kind of pain, in his words, sucks.

“It sucked. I definitely don't want to feel the way I felt after that game in the locker room,” Boulware said after practice earlier this week. “That was a terrible feeling. We didn't finish, and we didn't play the way we feel we should have played. It sucks. I don't want to feel that way ever again, and it's up to me to make sure I don't.”

Boulware leads the Tigers with 105 tackles, which was good for ninth in the ACC. His stellar senior season has included a bevy of awards - Boulware has been named a second-team All-American by Football Writers, Walter Camp, USA Today, Phil Steele and Associated Press.

He understands his place in the program, and he’s doing his best to live up to the standard he’s set for himself and his teammates. That means making practice fun during the weeks leading up to Clemson’s date with third-ranked Ohio St. in the Fiesta Bowl.

It also means keeping his energy high during the grueling hours of practice when no one else is on campus.

“It's always been high. It's been that way all season. The guys on our team and the leaders have done a great job of having high energy and making practice fun,” Boulware said. “The guys on our team know it's a long and grueling season and we try to do our best job of having high energy and a great attitude. You have to be here, so you might as well make the most out of it. That has been the mindset of the leaders of the team, and that's why we've played as well as we've played.”

Boulware said he wants his defensive teammates ready to play the game by this weekend.

“We will have our game plan by Thursday or Friday, and we will know what we want to do, and we will act like it's game week. You get too lackadaisical if you think, 'Oh, we have three weeks to prepare' and then you don't prepare nearly as hard,” he said. “That's the wrong mindset to have. I think the guys, especially on the defense, don't have that mindset. We will be ready to play by Friday or Saturday. That extra time is just extra time for us to put in some extra tendencies we might find on film, but the game plan will be in, and we will act like it's game week.

“I think we've played consistent all season. It's obviously not been perfect, and we aren't going to stop everything. They are D1 athletes, too, so they are going to crease us sometimes. I think this defense is a lot more consistent that it was last year. There have been some lapses every now and then, but that's football. They are going to get you sometimes.”