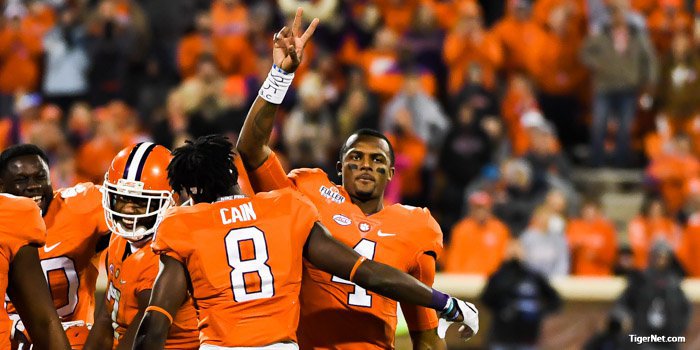 Watson and the Clemson offense put up big numbers Saturday

CLEMSON – Shortly after Kelly Bryant’s one-yard touchdown run late in the fourth quarter, the orange-clad throng still inside Death Valley cheered when Queen blared out from the speakers.

The Kings of the state sang Queen while the Princes of the land soaked in the cheers of the faithful as “We Will Rock You” reverberated throughout the stadium. It wasn’t quite up to the level of Clemson versus FSU – the first time I remember that song really making an impact inside the stadium – but it was one of those special moments that go down in the memory bank.

Bryant’s run capped off the Tigers’ 56-7 demolition of South Carolina and did it with a third-string quarterback running behind Clemson’s scout team offensive line. It was that kind of night.

There really isn’t anything we can say about the game, the result or the difference between the two programs at this point that you didn’t see for yourself. This was out and out domination. South Carolina just wasn’t competitive, and when you have reporters walking through the press box at halftime talking about how both Wake Forest and Troy are better than the product the Gamecocks brought to Clemson Saturday, you know it’s bad.

However, as we were walking to the car, I told Nikki and Scott Keepfer from the Greenville News that this is the kind of game that will resonate for a long, long time. It will resonate with both programs, and when you have a rivalry that is so emotionally-charged, the kind of thumping we witnessed Saturday will have lasting implications.

The final score said 56-7, but it was far worse than that. Quarterback Deshaun Watson and the starters left the game midway through the third quarter, and even though I had been told that Swinney knew he needed to impress the College Football Playoff committee with a resounding win, even he had to understand it was time to take the foot off the gas. Clemson could have scored 80. Or more. Instead, Swinney took the starters out and let the reserves have a field day over the game’s final 22 minutes.

All they did was outscore South Carolina 7-0.

And that’s where this game will stick with people. It wasn’t just a victory. It was annihilation with the victor taking pity over the vanquished, but not before rubbing salt in the proverbial wound. The South Carolina coaches and players had to stand by and watch as Swinney called two timeouts so the seniors (and juniors that are leaving) could get a final curtain call. They had to stand by and watch as senior defensive tackle Carlos Watkins purposely jumped offsides so the seniors on defense could get a curtain call.

There was already bad blood brewing before the game – a pregame skirmish that turned into nothing more than a war of words – and Swinney and Will Muschamp’s inability to connect for a pregame handshake of any consequence.

Then the game started, and things got worse.

Clemson outgained South Carolina 622-218 while amassing 250 yards rushing and piling up 41 first downs and averaging seven yards a play. The 622 yards and the first down total were the most in this rivalry’s history.

I had one former Clemson lineman tell me earlier this week that 1989’s 45-0 win over the Gamecocks was more dominant than the 63-17 game from 2003 that people like to talk about. Saturday’s night kick to the throat might have been better than either one of those.

Think about this for a second – Wayne Gallman had 82 yards rushing at the half. Mike Williams had 100 yards receiving on six catches. South Carolina had 52 total yards. That’s right – two of Clemson’s offensive players had outgained South Carolina on their own.

Take away the missed field goal early, the two touchdown passes that were dropped by Williams and Cain in the first half and Ben Boulware’s inability to scoop up a fumble and score after he knocked the ball loose from quarterback Brandon McIlwain and Clemson could have had far more than 49 points when Swinney decided to make the slaughter into a mercy killing.

And that’s where this game will resonate with both fan bases. Clemson will remember one of the sweetest victories in the rivalry’s history, but it wasn’t that long ago that South Carolina had the upper hand and Clemson would walk away shaking their heads and wonder if the rivalry would ever turn back in their favor.

Swinney and company went out on the recruiting trail and got the kinds of players that made the difference Saturday night, and you can bet that Muschamp and his staff are already planning to do the same.

“Not a lot to say. We got beat tonight by a better team,” Muschamp said. “I don’t know what else to say. They have a good team across all three phases. We got whipped. On the road recruiting, that’s the way we need to change our program.”

You can bet that the way Saturday night’s game went down will only add even more vitriol to the rivalry, and it will be interesting to see the reaction Clemson’s fans, players, and coaches receive in Columbia next November. Tailgating might not be as friendly as it seemed to be Saturday.

Add in South Carolina's players deciding after the game to talk about disrespect and the perceived slights that they felt were thrown their way - instead of their own dreadful performance - and things are taken up another notch.

This one? This one will leave marks and scars for a while.