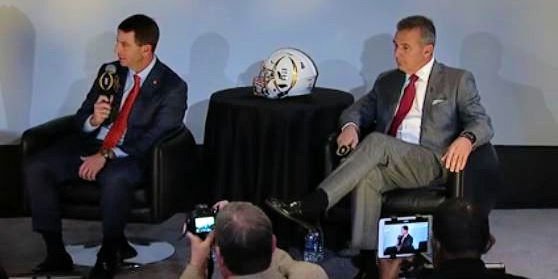 ATLANTA, GA – The phrase “act like you’ve been there before” is used throughout the sports world, but it’s a phrase that Clemson head coach Dabo Swinney is putting to good use.

Swinney’s second-ranked Clemson team takes on third-ranked Ohio St. in the Fiesta Bowl on New Year’s Eve, and it marks the second consecutive year the Tigers are a part of the College Football Playoff. The four coaches involved in the playoff – Ohio St.’s Urban Meyer, Swinney, Alabama’s Nick Saban and Washington’s Chris Petersen – met with the media Thursday night at the College Football Hall of Fame, and Swinney said he’s happy to once again compete for a title.

“First of all, congratulations to these guys here. You obviously don't get to this point without having a great staff and a great team, and certainly well-represented here on this stage.,” Swinney said. “So we're just honored to be back in it. You know, it was a great experience for us last year, and I'm proud of our team for having a great season this year and earning the opportunity to go compete with these other three great teams. It's good to be here, and happy for our fans and our university, and appreciative of the administration and the job that they've done to give us the opportunity to compete at the highest level.”

Swinney said the Tigers went into last year’s playoff “blind” but now have an idea what to expect and that he won’t change his approach this season. Been there before: Swinney and Meyer discuss similarities of teams

“Really kind of coming into it somewhat blind last year, but it was a great experience. We really just put everything that we had into the game we were playing, to be honest with you,” he said. “I mean, just like we do every week. It was a great experience at the Orange Bowl. Our guys were able to somewhat enjoy the bowl experience, and I thought the CFP folks, Bill Hancock and Michael Kelly and them, did a great job with the structure of it. We had great preparation, and the new thing to me was you win the game. So that was a lot of added thought for myself in trying to map out a good plan as far as how we get ready, how we transition, the logistics, all the stuff that goes with -- most time you go to a bowl game you win the game, you feel good about your season and you move on. Now you're loading up and coming back and getting ready for the National Championship, and we were starting school, so there was just a lot to manage, and we had not been through those waters.

“But I think that it was a great experience, really not anything I would change. We learned a lot, and we had great preparation. We lost to a great football team, and I thought once we got to the National Championship site, it was really just like a little bit of a longer away game, and it was very businesslike and very well structured. I think a great experience for our guys, and I'm glad that we're getting an opportunity to go compete again.”

Meyer said the Tigers aren’t strangers to the Buckeyes, especially after the two programs met in the Orange Bowl three years ago.

“Clemson and Alabama, we see them all the time. We know their players because we recruit against each other constantly,” Meyer said. “I know Clemson very well, and it was, I think, 40-35. We had a hard time stopping them. They had Sammy Watkins and Tajh Boyd and very good players on defense, too. No, not surprised at all, plus I think Dabo -- he's a great friend, but he's also an excellent coach, one of the top coaches in the profession.”

Both teams possess outstanding quarterbacks – J.T. Barrett from Ohio St. and Deshaun Watson from Clemson – and Meyer said that while there are similarities between the two it doesn’t make it easier to replicate Watson in practice.

“Well, our offenses are somewhat similar, so we play with tempo. We have some run-pass options, and the difference is obviously the athlete, and very rarely do you find a guy that's that big and athletic and can throw, so we're still trying to figure that out,” Meyer said. “The first part of our practices are always just fundamentally based and then we move into game planning, which will take place next week, so we'll have those conversations this weekend, who will play Deshaun, and then as difficult as those three receivers are to defend, as well. But those are all discussions we'll have this weekend.”

Swinney echoed Meyer’s comments and said Barrett will be a handful.

“We are similar in a lot of ways. They're a tempo team, a lot of shifts and motions built into what they do, and they're going to run their quarterback, similar to us, as well,” Swinney said. “But it's not just those guys. I mean, they're surrounded by a great cast. You know, two really good football teams, and we've got great respect for Ohio State. I watch them whenever I get the opportunity just like these guys just now, playing time, getting the opportunity to start studying them a little bit. But this is an outstanding quarterback team led by two great quarterbacks, certainly. But a lot of weapons around them. It's going to be a tough challenge.”