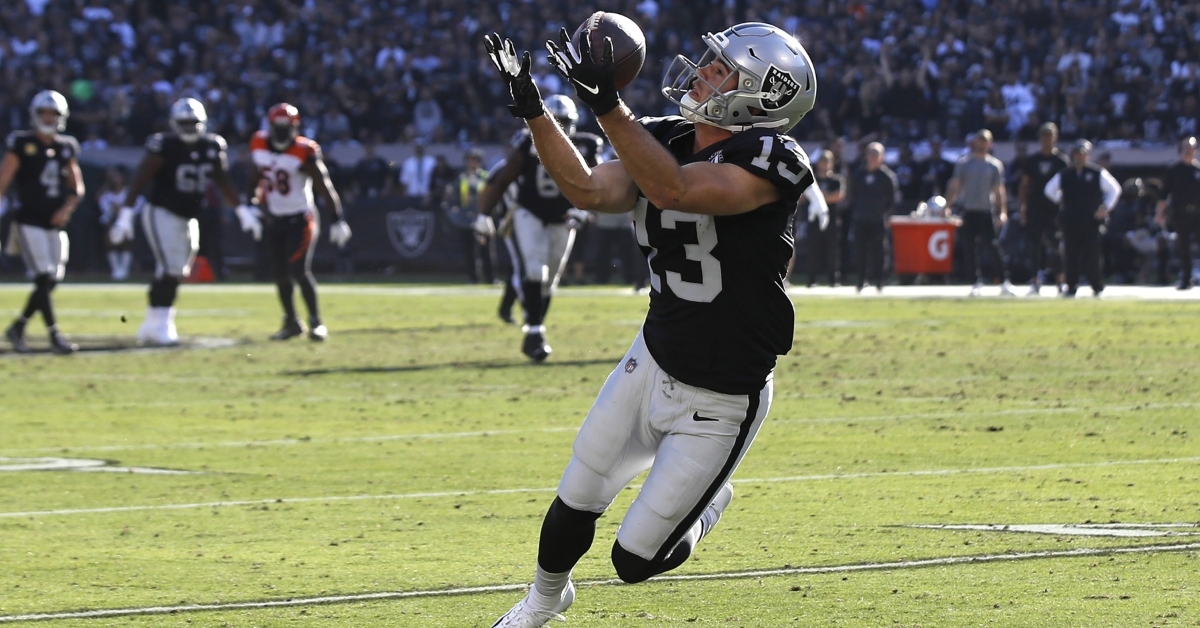 Hunter Renfrow is doing the same things a lot of other people his age are doing these days. He’s staying home, spending time with his wife, cutting grass, and playing video games. He’s also getting ready for the second season in the NFL.

The former Clemson receiver was selected in the fifth round (149th overall pick) by the Oakland Raiders last season and he played in 13 games. Renfrow caught 49 passes for 605 yards with four touchdowns. He missed a few games with a rib injury, but otherwise turned in a solid rookie season.

The Raiders have since moved to Las Vegas, and Renfrow spent a few minutes with a Vegas radio station to discuss his current situation and look ahead to the 2020 season.

“I am just hanging out here in South Carolina, staying away from everyone. I am playing some video games. My wife and I bought some land here in South Carolina and we have about 30 acres, so I think I spent eight hours yesterday mowing the grass. I've been doing little jobs. It's really been a good time. I know it's been tough and I know it's not something you would pick, and you would say I want this to happen with the virus and all of that. But I am trying to find the good in all of it and it's been good to be at home with my wife and really just get some good workouts done and run in the yard whenever I can.”

Keeping in touch with his Raiders teammates

“A little of everything. I've been texting some of them and calling some of them. Playing video games with some of them. It's such a unique time, but we've been able to keep in touch a little bit. As we are working out, we are texting each other, 'Alight, when is your workout starting? What are you doing?' And just keeping up from there. I know we are supposed to start OTA's in two weeks and I know that is not going to happen, but we are still keeping up and pushing each other.”

“It goes back to college. I remember when Derek signed his contract, I was probably a freshman or sophomore in college. I watched a video of him saying, alright, just because I have all of this money now, I am still going to tithe and this is an opportunity for me to help more people. And so I 've been a big fan of his since then. And when I was drafted with the Raiders, I was like I get to play with Derek Carr. I know he is a great player but the type of person he is, is special. And then as the season went along we played some Fortnite together and it really helped us chemistry-wise. I remember after the Lions game this year, that was the first thing we talked about whenever we won it. We were wondering how we were going to celebrate it and we said let's go run a game or two on Fortnite tonight. It's good to have that chemistry. And we are humans, too. We are a team on the field and we have a squad that we play with on Fortnite.”

What he is working on

“A lot. One thing that I need to do better is be more durable. I have been fairly durable during my career at Clemson, But you can't help win games if you aren't on the field and last year I got hurt and missed a few games. If I had used better technique catching the ball then I wouldn't have exposed my ribs or maybe if I had a little more meat on my bones I wouldn't have exposed them. And then learning to read the defense. I can change some things in that sense. Be more of a student of the game and understand what we are trying to do and go and win as many games as possible.”

What play does he want to run on a crucial 3rd-and-5?

“You want the ball, right? I like the choice route. It is something we didn't really do in college. This is my really my first year doing it and it really opens up a lot of possibilities. You can go in, out, sit down, and it helps when you guys like we have and it takes the top off of the coverage and get some double-teams and maybe get me 1-on-1. But I wouldn't mind a quarterback draw, either, because Derek can run it a little bit.”

On getting to Las Vegas and finding a place

“I am excited. My first trip was about a month ago and I didn't know what to expect, because my perception was the strip, and I don't really go out and party. But once I got there and saw what it was all about and saw the suburbs. It's beautiful. You see the golf courses and the mountains in the background, you can go skiing, it's unbelievable. I am excited to get down there and get a place and kind of dive into the community.”