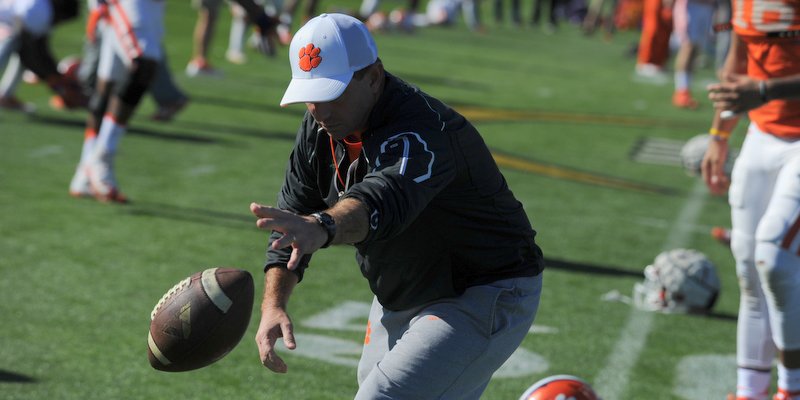 Swinney and Elliott throw to loosen up before practice

The Clemson football team held its first practice in Arizona at the community college early in the afternoon, and former players were on hand to take in the proceedings.

The media were allowed to watch the first four periods of the practice and we have a few short observations.

*Special teams coach Danny Pearman saw enough of one kicker to say, “Get him out of here. You didn’t come all the way out here just to eat, did you? You have to kick, too.”

*The quarterbacks spent the early part of practice going through footwork drills with quarterback coach Brandon Streeter, and redshirt freshman Zerrick Cooper has the best footwork of any quarterback not named Deshaun Watson.

*Head coach Dabo Swinney “warmed up” with co-offensive coordinator Tony Elliott, and Swinney would take a few steps back after each catch. Once he felt like he was warm enough, Swinney motioned for Elliott to throw a pass on the sideline and he dutifully stuck his feet on the stripe and waited for the throw. Big defensive tackle Carlos Watkins had other ideas, however, and stuck a big paw in the air and snatched an interception. Watkins erupted in laughter while Swinney just shook his head.”

*I always love the leadership that senior linebacker Ben Boulware, and sometimes that shows in Boulware acting like an older brother. In today’s case, it meant Boulware taking every chance possible to punch or poke freshman linebacker Jamie Skalski. It’s obvious that Boulware maybe sees a little of himself in Skalski, who has been a special teams dynamo this season. 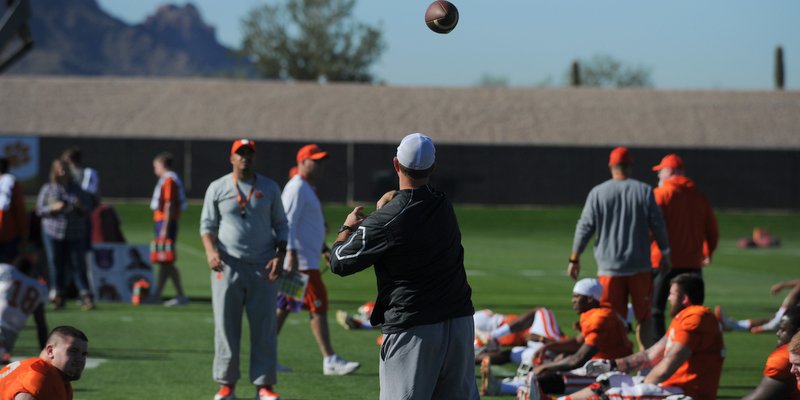 Swinney and Elliott throw to loosen up before practice"

*The Tigers were working on short kickoffs, and tight end Milan Richard took one short kick and sidestepped a defender and showed good speed racing up the sideline. Not sure if he would have had a touchdown if they had been going full speed, but it would have been close.

*Freshman running back Tavien Feaster spent a little time at kickoff return early in practice, and his speed is more than obvious to anyone who watches. The running back competition in the spring should be tight, but Feaster just adds that speed dimension that is rare to find. He will likely get another extended look in the spring in all of the return phases as well as running back.

*Clemson has a lot of ex-players on the staff serving as graduate assistants, including Tyler Grisham, Thomas Austin, DeAndre McDaniel and Durrell Barry. Some of those players never played in a bowl game of this magnitude and it’s obvious by the smiles at practice that they are enjoying themselves. All four will make someone outstanding full-time coaches.