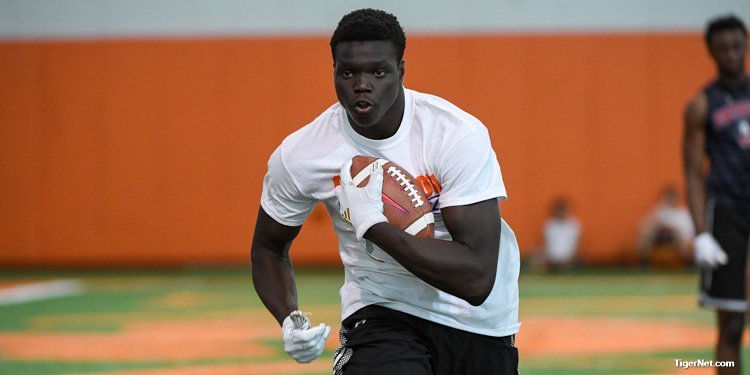 One of the top remaining targets for the Tigers in the 2020 recruiting cycle is on campus today for the All In Cookout and could be close to making a decision.

Ajou Ajou (uh-Joe uh-Joe) (6-3 210) is a 3-star prospect out of Canada who will play this season for Clearwater Academy International in Florida. Ajou is visiting thru Saturday morning with a close family friend since his mother does not have a passport and could not join him.

Ajou’s coach, Jesse Chinchar, said Scott has been combing the area for talent.

“He had kind of been a little disappointed by the 2020 receivers in the class,” Chinchar said. “He was down here scouting and looking for receivers, and he had mentioned that he was kind of disappointed in the receivers in the class. I said, have you heard of this kid Ajou Ajou. He said, “I haven’t.” But, they kind of did their homework and Coach (Tony) Elliott (area recruiter) came out to the school to find out more about him, and Coach Scott returned the next week to watch him practice.”

Scott obviously liked what he saw because he invited Ajou to camp in June. And after watching him perform, Scott offered.

“I went with him on his first visit to Clemson when he camped, so we got to experience some of it together,” Chinchar said. “We got to meet Coach Swinney and the whole staff, and he loved it. He obviously was very impressed. He was really impressed with the type of people in the organization and what they stand for and their values.”

Ajou took an official visit to Nebraska after his Clemson camp visit and the Cornhuskers, like Clemson, have been making a strong push.

“He’s been heavily recruited by a lot of other programs as well,” Chinchar said. “He’s kind of playing it close to the vest a little bit, but I think those two are definitely in the top there.”

Chinchar said Ajou has over 30 offers including Alabama, Penn State, Washington State, Auburn, Florida and Tennessee. He expects to talk with Ajou in the next day or so and expects him to make his decision soon after the Clemson visit.