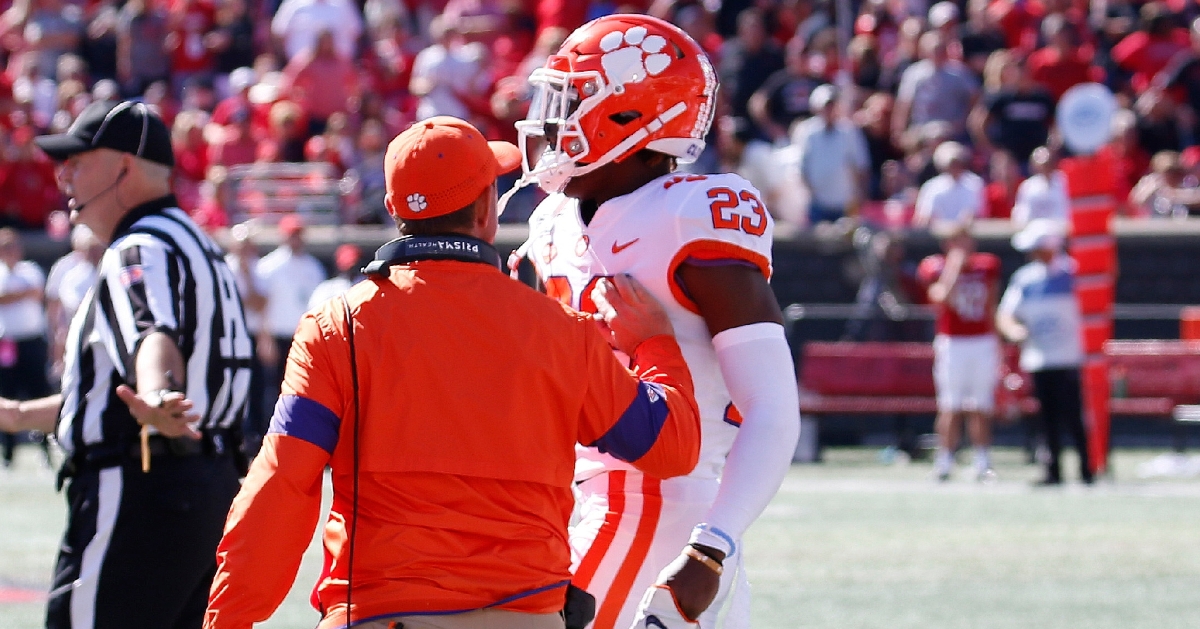 LOUISVILLE, KY – Freshman defensive back Andrew Booth made a mistake and owned up to that mistake by apologizing to his coaches and teammates.

Booth was ejected during the third quarter of Saturday’s 45-10 victory at Louisville for throwing a punch at the end of a punt return. As Louisville punted late in the third quarter, Booth became tangled with Cardinal defensive back Trenell Troutman.

Booth wound up on top of Troutman and after some more shoving, he delivered a punch straight into Troutman's helmet. The blow led to a commotion with players from both teams forming a pile.

Clemson head coach Dabo Swinney didn’t wait for the officials to make a ruling – Swinney met Booth out on the field and immediately sent Booth to the locker room. Booth lowered his head and ran with an assistant coach off the field.

“I wasn’t going to wait,” Swinney said after the game.

Swinney then said he was disappointed and that the outburst was unusual for the freshman.

“Disappointed in Booth. That is really disappointing,” Swinney said. “That is not who we are and that is not who he is. One thing I can say about Andrew Booth is he is one of the best young people, from an unbelievable family, and if I would have had to guess one through one hundred who would have been the one to do something like that he would have been at the bottom of the list.

“Really disappointed there, and there will be some consequences involved with that. I apologized to Coach Satterfield. That is not acceptable behavior, at all, and he will learn from it. Again, that is not indicative of who he is, either.”

When the team reached the locker room after the game, several seniors made their opinion known of the punch, and Booth apologized to his teammates. Defensive coordinator Brent Venables said Booth will learn from his mistake.

“I didn't need to (to talk to him). I tried to encourage him, and Coach Swinney certainly did and the other players did,” Venables said. “That is not who we are, and he is great kid who comes from a great family. That is not who he is, but he lost his mind temporarily and he will have to suffer the consequences. But that is not the image that we want out there as a football team. That was out of character from him and he will learn from it and he will be fine.”

Swinney said Booth was “remorseful” in the postgame locker room.

“He will have some consequences with me, and we talked about it as a team in there a moment ago and kind of let some of the seniors have a say because the team was not happy,” Swinney said. “The team was really upset, especially the veterans. He was very remorseful and disappointed in himself and he will learn from it.”