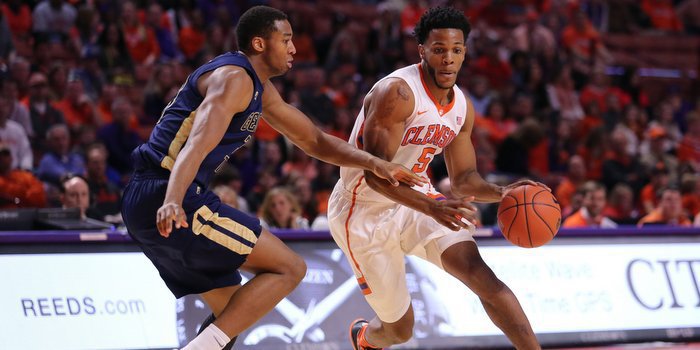 GREENVILLE – Clemson used a 9-0 run over a four-minute span late and put away a pesky Georgia Tech team with a 66-52 win over the Yellow Jackets Saturday afternoon in front of 12,232 fans at the Bon Secours Wellness Arena.

"Really good hard-fought twin for us. I thought our defense was very good the last 25 minutes of the game," head coach Brad Brownell said. "I am pleased with the way our guys competed. This was the kind of game we had to win by competing. We did a good job of battling on the boards. We had offensive intensity. Both teams just know each other very well and a lot of these games end up that way. It’s tough to score. And when neither team is making 3-pointers it’s even harder. But our guys played well in spurts offensively. We had to win with defense. We had a lot of guys contribute in different ways."

The Tigers jumped out a quick 6-2 lead but the Jackets went on a 14-2 run over next four minutes, and a short jumper by Adam Smith gave the Jackets a 16-8 lead with just over 12 minutes to play in the half. Donte Grantham put an end to the run with a 3-pointer from the corner, however, and the Tigers began the process of coming back.

A layup by Roper and a short jumper by Nnoko tied the score at 24-24 with 7:44 to play in the half, but both teams went cold over the next three minutes. Grantham gave the Tigers their first lead in 15 minutes with two free throws with 1:42 to play in the half, and a jumper by Quinton Stephens with 37 seconds to play pulled the Jackets to within one at 33-32.

The Tigers appeared to hold the ball for one last shot, but Blossomgame was fouled with six seconds left on the clock. He hit both free throws for a 35-32 lead, and Tech’s inbounds pass was stolen by Roper. Roper stepped inside the 3-point line and promptly drilled a shot at the buzzer for a 37-32 lead at intermission.

Blossomgame hit two free throws for the first points of the second half, the points giving him an even thousand for his career. That began a stretch of ragged play for both teams, helped out by the officials calling 12 fouls in the first seven minutes. When Stephens hit a 3-pointer from the wing with 12:30 to play, Clemson held a 43-42 lead.

Tech had two possessions to take the lead, but Roper came out of the under-12 media timeout and drilled a 3-pointer from the top of the key for a 46-42 lead. Roper missed a reverse layup on the Tigers’ next possession, but Sidy Djitte put back the miss for a 48-42 Tiger advantage.

The Jackets didn’t go away and pulled to within 48-46, but Avry Holmes hit a fast break layup and a quick steal turned into a Grantham tip-in for a 52-46 lead at the 7:12 mark. The basket on the offensive rebound elicited a fist pump from Brownell, brought the crowd to its feet and forced Tech to call a timeout.

The teams battled fairly evenly over the next four minutes, but two Blossomgame free throws and a tip-in by Nnoko gave the Tigers a 10-point lead at 60-50, and the Jackets appeared to get rattled. Tech settled for jump shots early in the shot clock instead of pushing the ball inside, missing seven consecutive shots over a three-minute span. Holmes hit a layup with 2:12 to play to give Clemson a 12-point lead at 62-50.

The Tigers added four more points, and Tech added a late layup for the final score.

"We have to shoot the ball better the next time we play them. I thought Landry was good and Sidy was good. We needed that. We need some more guys making more shots and find a way to get them comfortable," Brownell said. "I thought we were impatient today. There were times we were trying to score on the first pass or the first ball screen. We have to have a little more poise and share the ball a little better. We made too many 1-on-1 plays and we have to do a better job of sharing the ball."

Clemson hosts Boston College next Wednesday at 7 p.m., but finishes with three of the last four on the road.

Clemson vs GT Boxscore
Get the latest Clemson gear right here!
Comment on this story