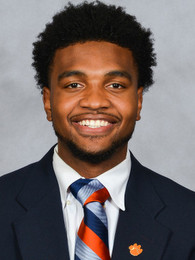 Guard
B I O
Signed in the fall of 2013 with Donte Grantham, both of whom were top-150 prospects ... came to Clemson after a decorated high school career in nearby Shelby, N.C. ... Parade All-American as a high school senior, only the fifth such honor for a Clemson signee ... one of the top scorers in all of high school basketball in 2013-14 ... led the state of North Carolina in scoring average as a senior ... has shown all-around improvement in each of his three seasons ... enters senior season with 439 points, 196 rebounds, 115 assists and 59 steals in 1,560 minutes played (83 games) ... has 83 career three-point goals, second-most among active Tigers ... recruited by then assistant coach Earl Grant ... an outstanding leader, he was class president at Shelby High as a freshman, sophomore and junior before serving as student body president as a senior ... majoring in marketing ... two-time member of the All-ACC Academic Team (2016,17).

2016-17
Earned the team's Academic Excellence Award ... All-ACC Academic Team selection for second straight season ... appeared in all 33 games, with seven starts ... averaged 24 minutes per contest ... averaged career-best 7.1 points per game, to go along with 2.8 rebounds per outing ... second on the Tiger team with 43 three-point goals and 37 steals ... shot career-best 32 percent behind the arc ... third on the team with 62 assists, with only 47 turnovers for a third straight season with a positive assist-turnover ratio ... scored double figures in nine games and played 20 or more minutes in 26 games.

BEST GAMES, 2016-17
Posted 15 points in season opener against Georgia, a Tiger win ... made 3-5 from long distance against the Bulldogs ... followed with 16-point outings against both Davidson and Xavier ... made 6-8 shots against the Wildcats, while adding four assists and three steals ... posted eight rebounds and five assists in the game with the Musketeers ... scored 11 points and added five assists against High Point ... scored 13 points against Mercer and was 3-5 from three ... notched 11 in win at Alabama ... also added four assists versus the Crimson Tide ... posted 14 points at Notre Dame and made 4-7 from long distance, all in the opening half of play ... scored 15 and added six rebounds, five assists and four steals in top all-around effort against Virginia ... posted nine points in road win over Pittsburgh ... notched 10 points against Syracuse in one-point defeat ... hit pair of three-pointers in home win over Wake Forest ... notched 10 points in home win over NC State.

2015-16
All-ACC Academic Team selection ... appeared in all 31 games, averaging 19.5 minutes per contest ... averaged 5.3 points per game, seventh-best on the team ... made 31 three-point goals, one of five Tigers with at least that many for the season ... improved his three-point shooting to a 30 percent accuracy ... averaged 2.8 rebounds per game, tied for most by a Tiger guard ... had a positive assist-turnover ratio (43-34) and showed an improved ability to see the floor ... tallied 15 steals, sixth-most on the team ... scored double figures in five games and played double-figure minutes in all but one.

Best Games, 2015-16
Made arguably the best shot of the season with 5.5 seconds to go in regulation, a wing three-pointer that sent the game at Syracuse on January 5 into overtime ... the Tigers eventually won, earning the program's first road win over a Final Four team in history ... posted 11 points in that game, tied for his top effort of the season (UTSA, Presbyterian) ... notched 10 points at North Carolina, the national runner-up ... made 2-4 threes and 4-4 free throws in Chapel Hill on December 30 ... posted nine points against North Carolina Central to open the season on November 13 ... posted first career double-double with 10 points and 10 rebounds against UMass ... posted seven points in the win over Duke on January 13 ... also had seven in both games against Virginia, a No. 1 seed in the NCAA Tournament ... had career-high six assissts at home against the Cavaliers on March 1 ... finished the season on a high note with eight points and two steals in 12 minutes against Georgia Tech.

2014-15
Appeared in 19 games and averaged 8.5 minutes per outing ... averaged 2.3 points per game for the season ... played well down the stretch, averaging 14.6 minutes and 7.8 points per game over Clemson's final five contests ... set single-game school record for points per minute after posting 18 in six minutes against NC State ... made 6-10 field goals, including 3-7 from three, in that game ... finished season with 10 points in 25 minutes against Florida State ... tallied eight points in 20 minutes at Duke, a Final Four participant ... made 3-6 shots, including 2-3, versus the Blue Devils ... nine of his 15 made field goals were behind the arc ... possessed a positive 10-to-3 assist-to-turnover ratio.