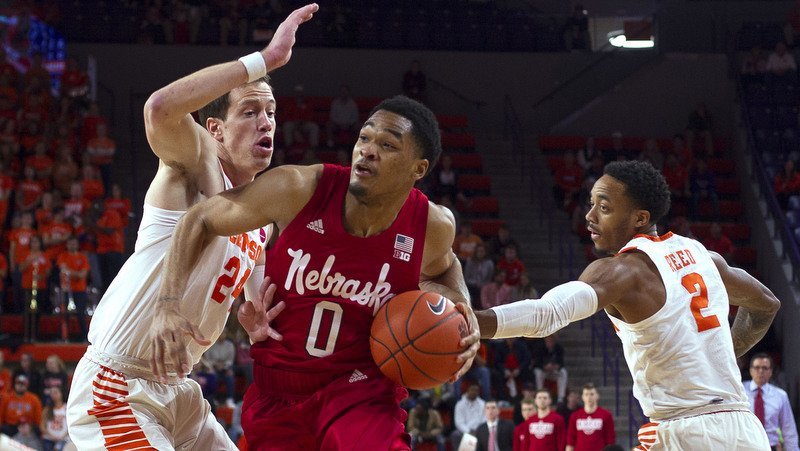 CLEMSON – Nebraska and Clemson were even much of the first half, but the Cornhuskers were too much for the Tigers to handle in the second half.

Nebraska (6-1) took down Clemson (5-2) 68-66 Monday night at Littlejohn Coliseum to give the Big 10 a point in the ACC/Big 10 Challenge. This was the second meeting between the Tigers and Cornhuskers with Clemson winning the only other meeting 60-58 in November 2016.

Monday’s game between Clemson and Nebraska was part of the ACC/Big Ten Challenge and it marked the Tigers 19th appearance in the contest. Clemson is third overall between both leagues with 11 wins – trailing only Duke (17) and Virginia (12).

Clemson is 11-8 overall, including 5-5 on its home floor in the ACC/Big 10 Challenge. It’s six road wins is the best among all programs in both leagues. The Tigers have won two-straight against the Big Ten, including last season’s 79-65 victory at Ohio State and a 60-58 matchup with Nebraska in 2016-17.

Nebraska opened a 64-56 lead capped off by a Thomas Allen three, forcing Clemson to call a timeout with 2:19 to play, but Clemson wouldn’t give up.

The Tigers outscored the Cornhuskers 8-2 over the next minute-and-a-half to cut the lead to 66-64 with 57 seconds to play. Marcquise Reed started the run with a three and David Skara gave Littlejohn life with a thunderous dunk on a fast break.

Clemson had a chance to tie the game after getting a stop with less than 10 seconds to play but a turnover by Reed forced Clemson to go into foul mode.

Glynn Watson, Jr. hit both free throws with just over six seconds to play and Aamir Simms answered with a layup to make it 68-66, with just one second remaining.

Much like the first half, Elijah Thomas scored four points, but quickly picked a foul – his third of the game – and headed to the bench.

Nebraska outscored Clemson 11-4 over the first four-and-a-half minutes of the second half opening up a 42-37 lead, but back-to-back jumpers by Marcquise Reed made it 42-41 game with 14:33 to play.

A pair of threes by Watson and James Palmer, Jr. once again made it a five-point game at 60-45 with just over 12 minutes to play.

Clemson cut the lead to one point with just over seven minutes to play but gave up back-to-back layups and an Isaac Copeland, Jr. dunk, all while turning it over on consecutive offensive possessions as Nebraska extended its lead to 59-52 with 5:32 to play.

The two teams stayed within striking distance of each other for the entire first half, with the biggest lead for either team coming at the 17:20 mark when Clemson lead 6-0.

Elijah Thomas scored the first four points but was limited in the first half after picking up a technical foul and a personal foul.

The Tigers led for most of the first half until Nebraska went on a 9-2 run to take a 29-25 lead with just over five minutes to play before intermission.

Clyde Trapp had arguably his best half of the season, going 2-for-2 from beyond the arc and scoring eight points in the first half.

The Tigers have eight days off, hosting St. Peter's on December 4th at 7 pm in Littlejohn Coliseum.