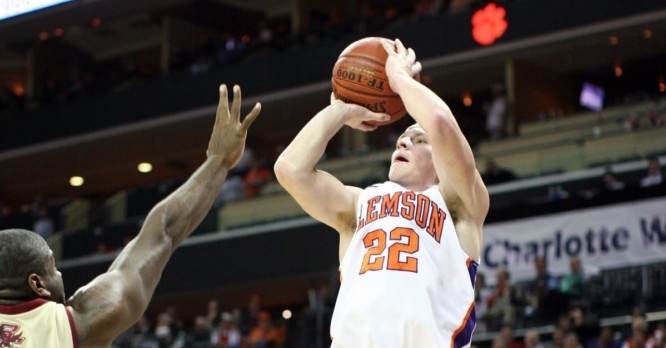 Terrence Oglesby is one of the most beloved players in Clemson basketball history, has a unique perspective on the game, and will now be a regular contributor to TigerNet’s basketball coverage.

Oglesby, a starting guard on Clemson’s 2008-09 NCAA Tournament team, appeared in 66 games and scored 777 points in his two seasons with the program.

Tevin Mack and Clyde Trapp each scored career-highs and Trapp’s basket with just over two seconds remaining lifted Clemson to a 71-70 victory over Syracuse at Littlejohn Coliseum Tuesday night.

Clemson settled for a lot of threes in the first half, and even though they hit quite a few, I know the Tigers went into the half thinking about other ways to score. In the second half, Clemson attacked the paint with a tremendous sense of urgency. Syracuse got in foul trouble and had trouble reestablishing themselves with young big men entering the game. The drop off on both ends of the floor was dramatic, and Clemson was able to play defense differently with Marek Dolezaj out of the ball game.

This is the type of game that Mack needed to regain his momentum after a few tough games. He was engaged from the beginning and did a phenomenal job finding openings in the middle of the zone. Not only did he mark his career-high with 32 points, but he also collected ten rebounds with six of those coming on the offensive glass. As I said prior to the game, the Syracuse zone is susceptible to offensive rebounding, and Mack took full advantage. His best performance in a Tiger uniform without question.Deep 3 with T.O.: Terrence Oglesby's Syracuse Post Game Analysis

END OF THE GAME SEQUENCE

One thing that coaches always worry about is if they should call a timeout at the end of a game to set up a last-second play or not. Coach Brownell chose not to. And what a great call it was. One thing Clemson does have is five guys who can handle the ball going full court, especially with Khavon Moore on the floor. Tiger fans haven't seen him as much this year, but what happened at the end of the game with his assist to Clyde Trapp for the game-winning bucket is exactly what he brings to the table. A big “hybrid-forward” who can get a rebound and push it. He's got a little Donte Grantham in his game, just doesn't shoot it as well, yet. Great play by Moore and a better decision by Brownell to let his guys go.

When Clemson made their run, they were making sharp crisp passes, and they were catching them. I know that seems like I am being overly critical, but bad passes and catches mess up timing. In the second half, Clemson stopped turning the ball over and began seeing the holes in the zone because they had more time. Every high school coach in the country says it “fake a pass to make a pass.” I can promise you that was mentioned at halftime, and it showed.

There's a lot to be happy about this game. Clemson stomps its way back to .500 and gets to see Wake Forest on Saturday at 8:00 pm. As I've said before, Wake is talented, and they've proven they can win at home in league play. Look for Tevin Mack to continue being assertive and for Clyde Trapp to continue playing into shape. Trapp played his best game as a Tiger today and looks to continue pushing through his mental assimilation to ACC play. Look for the Tigers to carry this energy through the weekend.