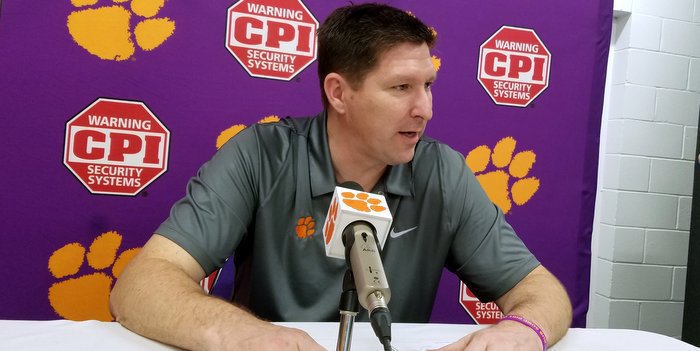 Brownell talks to the media Thursday

CLEMSON – The flight and bus ride home from Tuesday night’s one-point loss to Virginia Tech were quiet affairs, and head coach Brad Brownell said the Tigers’ trend of losing close games has taken a toll on his players this season.

Clemson stands at 14-13 overall and just 4-11 in the ACC after Virginia Tech guard Seth Allen drained a 3-pointer with 3.8 seconds left to play to carry the Hokies to a 71-70 victory. Clemson lost its 10th game this season decided by six points or fewer and suffered its fifth defeat in its past six games.

The Tigers have lost three games by one point in the last nine games, and six games have been lost by a total of 12 points since losing by three in overtime to North Carolina to start ACC play. Clemson is 3-10 in games decided by six points or less.

“It's hard. It's challenging; there's no doubt about it. When you put so much into all of these games and play well for a bunch of minutes and then don't make a play to win it,” Brownell told TigerNet Thursday. “Having said that, our guys have done a great job all year of continuing to fight and really put ourselves in a position to win games, and that's what you're trying to do. We just need to follow through. Our practice was good again today. As good as we are physically it's the emotional part of it that makes it really hard. It's the emotional investment and where your emotions end up after tough losses. It was a quiet bus ride home. And we know we will have to play with a ton of energy Saturday against a talented Florida St. team.”

Clemson’s Marcquise Reed hit a baseline jumper with 21.6 seconds left to play, and Tech’s Zach LeDay got the rebound, but the ball was knocked out of his hands and went out of bounds off Clemson.

Virginia Tech then worked the ball to Allen, who buried a 3-pointer from the top of the key.

Clemson had a final chance, but Donte Grantham’s three-quarter court lob from the baseline to Jaron Blossomgame was knocked away.

Brownell said he thinks it was the right call.

“The matchup we had is the one we wanted. When you look at the film, and you see what happens, they have a guy on the ball, we've got Avry (Holmes) and Gabe (DeVoe) in the frontcourt really out of the way and it's 1-on-1 with our best athlete in Jaron Blossomgame against their best athlete (Ty) Outlaw, who's 6-5 and Jaron is 6-7 and the best athlete on the floor,” Brownell said. “We've got Marcquise (Reed) down there, so we know they will stay down there out of his way. It's the same kind of play we ran against Georgia Tech last year, and Jaron made the catch and didn't make the shot, and he didn't have as much time.

“Maybe we could have gotten the ball into Marcquise or Shelton (Mitchell) in the backcourt, and they take a couple of dribbles, and they take a 35-footer. In hindsight, a 35-footer is better than what we ended up with, but really I just think it was execution. We had our best athlete in a position to make a catch, and he got his hands on the ball. Donte needed to loft the ball a little higher and give Jaron one more second to get under it. If he would have made the catch anywhere in the frontcourt, he could have taken two or three dribbles and been at the rim or within six or eight feet and get a real makeable shot.”

He then said the fact that his players keep fighting and still come up short is tough to watch.

“I think our guys are making plays to win. That is what is so heart-wrenching about the way we lost. Our guys are making plays,” Brownell said. “It's difficult to continually try to get amped up and play really well and keep competing and emotionally put everything you have into all of these games and then come up a point short. It's hard on your guys, and it takes a toll. We've been snakebit a little bit and haven't done enough to finish off games.”

The Tigers finish the regular season with three consecutive home games, starting with Saturday’s noon tipoff against Florida St., and Brownell said he hopes the fans come out to support the team.

“We just encourage them to come out and support these guys. By and large, they've done a pretty good job. It’s not easy the way our games have been,” Brownell said. “It doesn't feel like we have had any Saturday games. All of our games have been on weeknights when we have had home games. That's difficult. We've gotten a lot of supporting emails, and people we are seeing around town are very supportive. They understand. Everybody is a little frustrated because they all want to win. I think they see a team that is competing hard and playing pretty good basketball, but for whatever reason, we aren't finishing off games. It's just one of those years when things haven't gone our way, and we have to do a little bit better.”