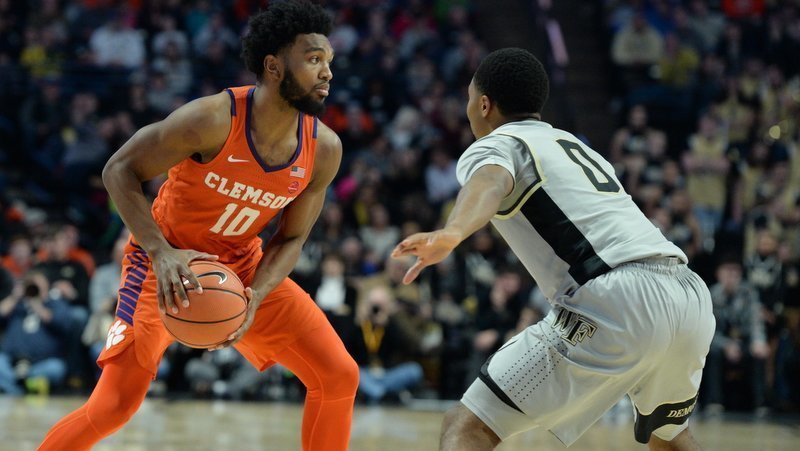 DeVoe has scored 66 points in the last three games

Clemson found itself trailing several times in the second half, but the heroics of DeVoe, Marcquise Reed and Elijah Thomas propelled the Tigers to their third win on the road in the ACC.

Here are our 3 stars from Clemson’s win:

To say that DeVoe is en fuego offensively would be a gross understatement. The senior guard has found his groove down the stretch in ACC play. Against Georgia Tech, DeVoe tied his career high of 25 points and he followed that up with a 17-point performance Tuesday night against North Carolina and added 24 points Saturday afternoon in the win over Wake Forest. During the three-game stretch, DeVoe is 24-of-38 from the field, 15-of-23 from beyond the arc and has scored 66 points.

Clemson head coach Brad Brownell said that this may be DeVoe’s best ball, but he expects it from his senior leader.

The junior Robert Morris transfer scored 22 points Saturday afternoon, but it was his ability to stay out of foul trouble late in the game that helped Clemson the most. Reed – uncharacteristically and questionably – had four fouls against the Demon Deacons, forcing Brownell to go to a zone late in the game in order to keep one of his best players on the court. Reed hit four free throws in the final two minutes to seal the win.

While Thomas’ stats won’t jump off the page – five points, seven rebounds and two assists – his grit and toughness down the stretch was a big reason Clemson was able to pull away late. The junior forward had probably his toughest matchup against the 7-foot center Olivier Sarr, but that didn’t stop him from battling for big rebounds, especially late in the game to give Clemson second-chance points and run more time off the clock.