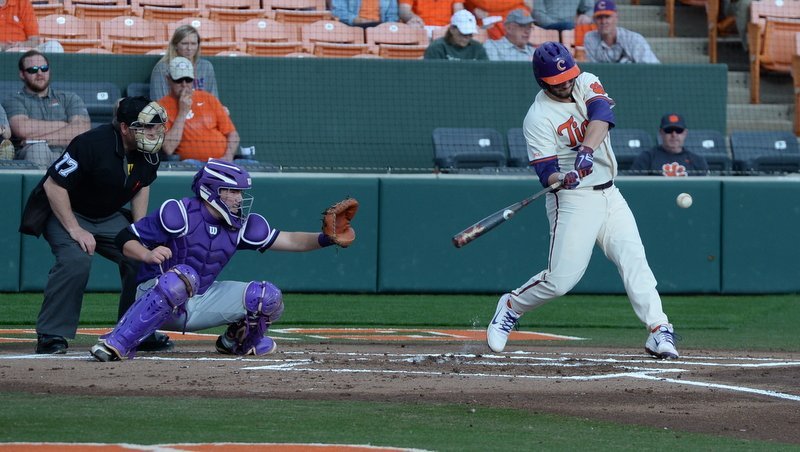 Chris Williams drove in a career-high six for the Tigers

CLEMSON – Chris Williams drove in a career-high six runs and hit his first homer of the season as No. 11 Clemson defeated Furman 12-4 Tuesday afternoon at Doug Kingsmore Stadium.

Williams crushed a three-run homer to right-center as part of a four-run fifth as Clemson improved to 4-0 on the season. Furman suffered its first loss of the season and fell to 3-1. Patrick Cromwell had three hits, drove in three and scored twice while Seth Beer and Robert Jolly each had two hits and scored twice. Clemson had 13 hits.

“Hitting is contagious,” head coach Monte Lee said. “It is kind of an old cliché, but when you are on deck and the guy in front of you makes an out, it is tough. It is contagious. When a guy goes up there and drills a ball and hits it hard on the barrel, it gives you a little more confidence. If you are on deck or you are in the hole and you start to see that momentum building.

“The game was tight until the fifth, Chris Williams had a heck of a day drove in six runs, had a big homerun and a double later in the game."

“It is a confidence thing, too,” Jolly said. “One guy gets a hit and the next guy is saying I can do the same thing. It relaxes him and builds confidence for him and it does not put a lot of pressure on one guy. That is when you see those hits just start rolling and the good at-bats start rolling. It is a thing of beauty. That is why you have to love baseball.”

Chris Williams drove in a career-high six for the Tigers"

The Tigers scored the game’s first run in the bottom of the third. Logan Davidson reached first on a passed ball (dropped third strike) and moved to second on a single by Beer. Davidson advanced to third on a wild pitch and scored on a deep fly to left-center off the bat of Williams for a 1-0 lead.

Starter Sam Weatherly cruised through the early part of the game but ran into a spot of trouble in the fourth. Jabari Richards singled to lead off the inning and he came around to score on Jason Costa’s double into the gap. That was the end of the night for Weatherly, who was replaced by Ryan Miller.

Weatherly wound up pitching three innings, allowing the one run, three hits, walking one, and striking out three.

Beer started things for the Tigers in the bottom of the fifth, stroking a one-out single to right. Patrick Cromwell walked and Williams blasted a 2-2 pitch over the wall in right-center for a 4-1 Clemson lead. It was Williams’ first homer of the season. Two walks and an RBI single by Bryce Teodosio added another run and the Tigers led 5-1 at the end of five.

Beer was again the catalyst in the sixth, starting off the inning with a walk. He moved to third on Patrick Cromwell’s single, but Cromwell was erased on Wiliams’ double-play comebacker to the pitcher. Robert Jolly then sliced a two-out, RBI double to left that scored Beer for a 6-1 lead. Drew Donathan smoked a single to right that scored Jolly, the first hit of Donathan’s career, and Clemson led 7-1.

Mitchell Miller replaced Ryan Miller to start the seventh. Ryan Miller pitched three innings, giving up no hits or runs while striking out two and walking one.

Kyle Wilkie walked with one out in the bottom of the seventh and moved to third on Davidson’s hard-hit single down the right-field line. Beer lofted a 0-2 breaking ball to center, scoring Wilkie for the 8-1 lead. Cromwell singled, moving Davidson to third, and Cromwell took second on the throw to third. Williams stroked a double to right-center that scored both runners and Clemson led 10-1.

Justin Hawkins came on as a pinch-hitter and drilled a two-run homer over the wall in center for the 12-1 lead. It was the first hit and homer of Hawkins’ Clemson career.

A single and back-to-back walks loaded the bases for the Paladins in the eighth, who scored two runs on a double play and a single to make it 12-3. The Paladins added a single run in the ninth.

The Tigers and Paladins meet again on March 27th in Greenville at Fluor Field.

Clemson hosts 16th-ranked Dallas Baptist (D1baseball.com) this weekend in a three-game series. The first game is Friday at 4 p.m., Saturday’s game is at 1 p.m. and Sunday’s series finale is at 1 p.m.

Clemson vs. Furman boxscore
Get the latest Clemson gear right here!
Comment on this story