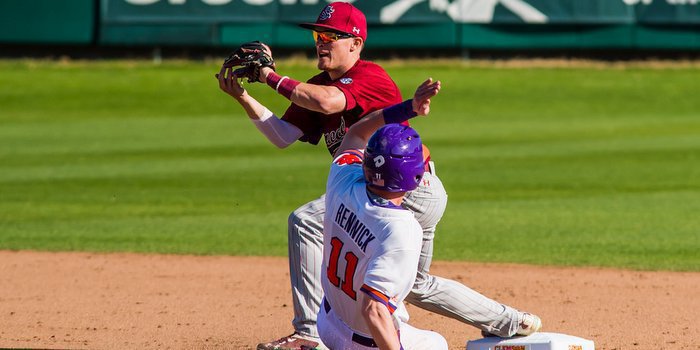 CLEMSON – One of the fiercest rivalries in college baseball will resume Friday when No. 12 Clemson starts a three-game series against No. 4 South Carolina in the Reedy Rivalry.

The Gamecocks play at Clemson at 6:30 p.m. Friday, the teams play at Greenville’s Fluor Field at 1 p.m. Saturday and finish the series with a 1:30 p.m. start at Founders Park in Columbia Sunday afternoon. Clemson has won each of the last two regular-season series against South Carolina with a 2-1 record and leads the overall series 174-136-2 (1899-2016).

The Tigers look to keep the upper hand this weekend, but head coach Monte Lee said Tuesday that he knows that’s easier said than done.

“I think that's the big thing going into the weekend,” he said. “Offensively we have to try to make some adjustments to the type of arms we're going to face. We've got to be able to hit plus-plus fastballs all weekend. That's going to be tough. We know their lineup is very dangerous. They're a good club. We know it's going to be great crowds at all three venues. We've just got to drown out the noise and play baseball.

“I'm not the kind of guy that makes that big of a deal out of one game over another. I'm a big believer in consistency - consistent approaches by your players, consistent preparation wins over the long haul. We've all been guilty of making it too big, and when you make things too big of a deal, that's the wrong approach. They're all important. We know we have a quality opponent this weekend and we have to play our best baseball to win the series.”

Outfielder Reed Rohlman says he looks forward to this weekend every year.

• The Reedy River Rivalry Tailgate Party, which opens Saturday at 11 a.m., is on Main Street at Fluor Field.

• Food, drinks and interactive exhibits for fans of all ages can be found on Main Street all day on Saturday.

• There will be live music from Cassidy Lynn and Two Story Road until 7 p.m., on Saturday.

• South Carolina is Clemson’s most-common opponent in history, as the two have faced off 312 times dating to 1899.

• Clemson defeated Wofford 9-2 at Doug Kingsmore Stadium on Tuesday and has won five games in a row.

• Matt Williams is hitting a team-high .381, while Jacob Olson is batting .333 with three homers and six RBIs.

• Clemson has won each of the last two regular-season series against South Carolina with a 2-1 record.

• Clemson is the designated visiting team and will occupy the third-base dugout for Saturday’s game at Fluor Field.

• Tiger graduate righthander Tyler Jackson was a member of the 2013 South Carolina team before playing at USC Lancaster and USC Upstate.

• Clemson has a 19-6 all-time record at Fluor Field in Greenville, S.C.

• The school record for strikeouts per nine innings pitched is 9.69, set by the 1996 squad that featured Kris Benson and Billy Koch.

• Tiger pitchers have totaled double-digit strikeouts in seven of the eight games in 2017.

• Charlie Barnes, Ryley Gilliam, and Brooks Crawford had a school-record 23 strikeouts in the 1-0 victory over Elon in 13 innings on Feb. 24.