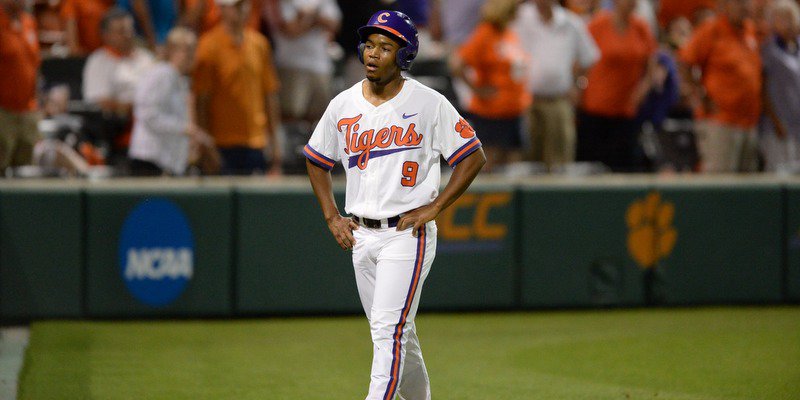 CLEMSON – Monday’s game changed on a play at the plate.

What appeared to be a run-scoring double for Clemson turned into an out call and a big swing in momentum as No. 2 seed Vanderbilt defeated No. 1 seed Clemson 8-0 in the finale of the NCAA Clemson Regional at Doug Kingsmore Stadium.

A controversial call cost the Tigers in the bottom of the third. Jordan Greene reached on a two-out error and Logan Davidson laced a double into the right field corner. Greene was waved around third, and the throw to the plate was way up the line and Greene appeared to score easily. However, Vanderbilt starting pitcher Matt Ruppenthal had catcher Jason Delay run over and tag Greene near the on-deck circle, and the umpire called Greene out for missing the plate.

Vanderbilt took the momentum from there and rode the wave to a dominant win. They advance to take on Oregon St., the number one overall national seed in the tourney. OSU coasted through the Corvallis Regional and finished things off with an 8-1 victory over Yale on Sunday night at Goss Stadium. The Beavers outscored their three regional opponents by a combined 27-3. Vanderbilt will travel to Corvallis with a trip to Omaha on the line.

Clemson ends Monte Lee's second season with another home regional defeat and 42-21 record. Vanderbilt improves to 36-23-1. Clemson has not traded shutouts with the same team in consecutive games since April, 23, 1949 against The Citadel.

"Offensively, they were really good tonight," Lee said. "Overall, the game was about Vanderbilt and their starting pitching. We had a lot of highs and a lot of lows, but they always came to work and always played hard. That is all you can ask for."

Senior first baseman Andrew Cox had tears in his eyes as he sat at the podium during the postgame press conference.

"Being able to wear this jersey was a dream of mine since I was a kid. I'm forever indebted to this program," Cox said.

Starter Alex Eubanks was economical through the first two innings but ran into trouble in the third. J.J. Bleday singled to right, and Will Toffey crushed a two-run homer to center for a 2-0 Vanderbilt lead.

Eubanks pitched four innings, giving up the two runs on two hits while walking none and striking out two.

Vanderbilt touched up reliever Ryley Gilliam in the fifth. Delay singled to right and advanced to second on a wild pitch. Bleday singled to right and took the second on the throw, putting runners at second and third. Connor Kaiser hit a high chopper to third for an infield single that scored Delay for a 3-0 lead. That was the end of the night for Gilliam, who faced three batters without recording an out.

Monte Lee turned to reliever Jeremy Beasley, who promptly served up a three-run homer to Toffey and the Tigers quickly faced a 6-0 deficit.

The Commodores added another run in the sixth that made it 7-0, and Clemson didn't really threaten until the eighth. Clemson loaded the bases with one out, bringing Seth Beer to the plate. Beer worked the count to 3-2, but struck out swinging after he was busted inside. Weston Jackson bounced to third for the third and final out.

The Commodores added another run in the ninth.