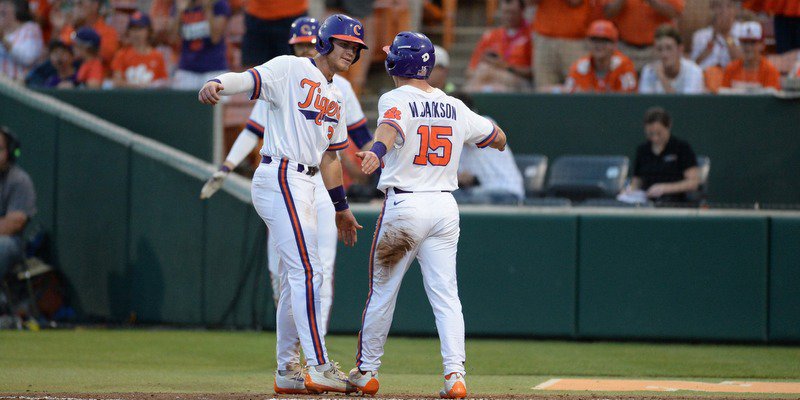 Eubanks earned the win, improving to 7-5 on the season (Photo by David Grooms)

No. 1 seed Clemson overcame an early deficit with a four-run fifth inning and held on for a 5-4 victory over No. 4 seed UNC Greensboro in the second game of the NCAA Clemson Regional Friday night at Doug Kingsmore Stadium.

Weston Jackson had a big two-run single in that fifth inning, while Logan Davidson had three hits and a RBI for the Clemson offense. Alex Eubanks pitched 7 2/3 strong innings to pick up the win, improving to 7-5 on the year.

"What an intense ballgame tonight. An intense game. Two teams that played very complete games," head coach Monte Lee said. "It was a great atmosphere tonight and great support from our fans and it made a huge difference. That is a really good ballclub, and their lineup is as good as some you see in the ACC. They've got a really good club.

"The game boiled down to pitching and defense for us. I thought Alex Eubanks was really, really good. We held them to solo homers, which is a testament to our pitching and our defense. And Pat Krall came in at the end of the game and did an amazing job. And we had some big two-out hits. Weston Jackson got it going for us in the fifth inning and then Logan Davidson there in the bottom of the eighth. That run was important as it turned out."

The teams were scoreless through the first three innings as the Tigers left five runners on base, including leaving the bases loaded in the first. UNCG broke the tie in the fourth when Caleb Webster hit his first home run of the season for a 1-0 lead. 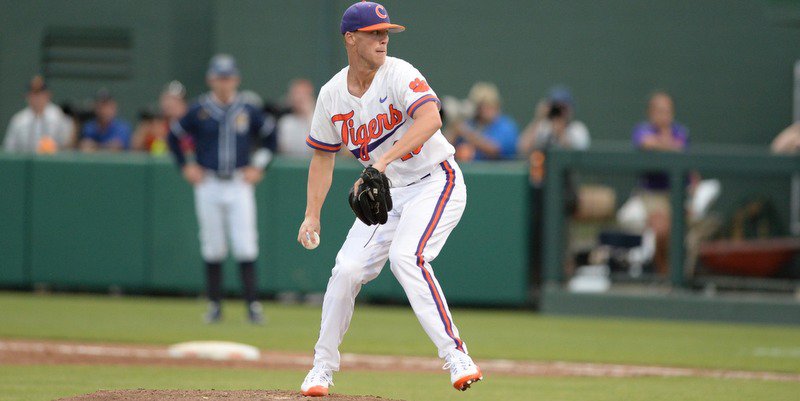 Eubanks earned the win, improving to 7-5 on the season (Photo by David Grooms)"

UNCG pitcher Bryce Hensley kept the Tigers off balance until the fifth. Logan Davidson singled to center with one out, and Reed Rohlman walked to put runners on first and second. Chase Pinder bounced to the first baseman, who tagged out Rohlman for the second out but lost the race to the bag with Pinder. That brought up Seth Beer, and UNCG walked him intentionally for the third time in five innings.

That brought up Jackson, who slapped a single to right that scored Davidson and Pinder for a 2-1 lead. Jackson advanced to second on a wild pitch, and Andrew Cox hit a high bouncer on the infield that got past the second baseman, allowing both runners to cross the plate for a 4-1 lead.

UNCG trimmed the lead to two in the top of the seventh when Cesar Trejo slammed a solo shot over the wall in center that made it 4-2. It was Trejo’s 11th homer of the season.

Eubanks continued to pitch well, and his night was done after he hit 101 pitches with two out in the eighth. He was lifted for Ryley Gilliam after a single to center. A wild pitch moved the runner into scoring position, and Gilliam gave up a single to center that made it 4-3.

Eubanks went 7 2/3 innings, giving up three runs (both earned) on seven hits with a walk and five strikeouts. Gilliam got a flyout to end the threat, and the Tigers held on to a tenuous 4-3 lead.

The Tigers got the run back in the bottom of the inning. Jordan Greene drew a one-out walk, advanced to second on a throwing error on a failed pickoff at first and moved to third on a wild pitch. Kyle Wilkie struck out for the second out, but Davidson lined a run-scoring single to center that made it 5-3.

Trejo touched up Gilliam for a leadoff homer in the ninth, a no-doubter to center field that made it 5-4. Monte Lee wasted no time in replacing Gilliam, bringing in usual Sunday starter Pat Krall out of the bullpen to get the final three outs.

Krall got a liner to center for the first out, but the next batter singled to deep short, bringing the go-ahead run to the plate. Ryan Clinch hit a shot back at Krall, who took the ball off his foot and threw out Clinch for the second out. That brought up Ben Spitznagel, who hit a soft liner to short to end the game.

The save was the first for Krall since saving a game against Louisville in the ACC Tournament in 2016.

Clemson vs UNCG Boxscore
Get the latest Clemson gear right here!
Comment on this story