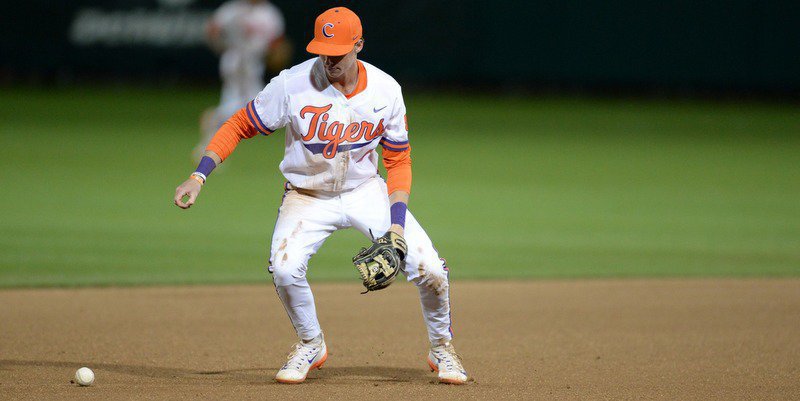 CLEMSON – Two critical mistakes in the sixth and too many runners left on base cost Clemson the series opener against South Carolina.

Two errors led to two runs, and the Tigers left 10 men on base as No. 4 South Carolina escaped Doug Kingsmore Stadium with a 2-0 victory over No. 12 Clemson in the opener of the Reedy River Rivalry. Game two of the series is Saturday at Fluor Field in Greenville, and game three will be held Sunday afternoon at Founders Park in Columbia.

South Carolina improves to 7-3 with the win, while Clemson falls to 6-3.

The teams combined for just eight hits on a cold and windy night – Clemson had five of the eight – but the Tigers failed to take advantage of seven walks and an error.

"Give South Carolina credit. It was a tight ballgame on both sides. Both sides pitched very, very well," head coach Monte Lee said."You've got to give them credit for taking advantage of a couple of miscues on our part in one inning. Basically, the one inning where we had a couple of mistakes and had a couple of errors cost us two runs. It's unfortunate because I thought Charlie Barnes pitched exceptionally well, even in the sixth inning.

"We had our opportunities. Four out of the first five innings, we had the leadoff guy reach base and we were unable to score. We hit into three double plays - the big double play in the fourth. I thought the fourth inning was our opportunity to get Clarke Schmidt possibly out of the game. His pitch count was getting high and we hit into the double play. He did what good pitchers do and he hung in there even when he wasn't at his best and kept battling and found a way to get it to their two best relievers in Reagan and Johnson." 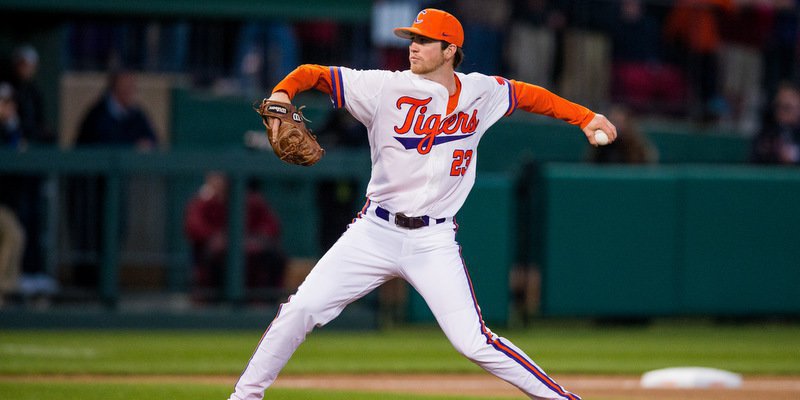 The Tigers squandered early chances to get to Gamecock starter Clarke Schmidt. Schmidt walked a career-high seven batters, many in the first three innings and the Tigers left seven runners on base through the first five innings.

Barnes was more effective than Schmidt, but ran into trouble in the sixth due to shaky defense. T.J. Hopkins reached on an error by shortstop Logan Davidson and moved to second on a sacrifice bunt. Matt Williams singled to put runners at the corners with one out, but it looked like Barnes would get out of trouble when he struck out cleanup hitter Alex Destino.

Madison Stokes hit a high fly ball to right field that looked like it would be the final out, but right fielder K.J. Bryant tried to make a sliding catch, and the ball bounced out of his glove for an error, allowing both runs to score for a 2-0 South Carolina lead.

The Tigers finally chased Schmidt in the bottom of the sixth. Schmidt collected two quick outs, but Robert Jolly smoked a liner that went off the wall in left for a two-out double. Schmidt threw two pitches to Grayson Byrd – both balls – and he was replaced by lefty Josh Reagan. Reagan walked Byrd, and Lee pinch-hit for Patrick Cromwell with Weston Jackson. However, Jackson grounded out to first to end the threat.

Schmidt allowed four hits and seven walks, but no runs and struck out five in 5.2 innings.

Barnes was fantastic and deserved a better fate, pitching 7 ½ innings with two walks and seven strikeouts. Neither of the runs were earned. He took the loss and fell to 0-1 on the season despite fashioning an ERA of 0.92 in his 19 2/3 innings in his first three starts.

Tyler Johnson came on to pitch the ninth for the Gamecocks. He coaxed Byrd into a groundout, but Jackson drew a one-out walk that brought up Jordan Greene. Greene flew to center for the second out, and Rohlman lined out to center to end the game.

"It was a tough one for us because, in all honesty, I thought we played fairly well in a lot of areas," Lee said. "We just couldn't come up with the big hit with runners in scoring position and we made a couple of errors that cost us, but you've got South Carolina credit. They took advantage of some mistakes and we were unable to. We were unable to take advantage of our opportunities. Like I said going into the weekend, a lot of times in games like this, it boils down to who makes the most mistakes and we made a couple of mistakes tonight and we got beat."

Clemson vs. Scar Game One box
Get the latest Clemson gear right here!
Comment on this story