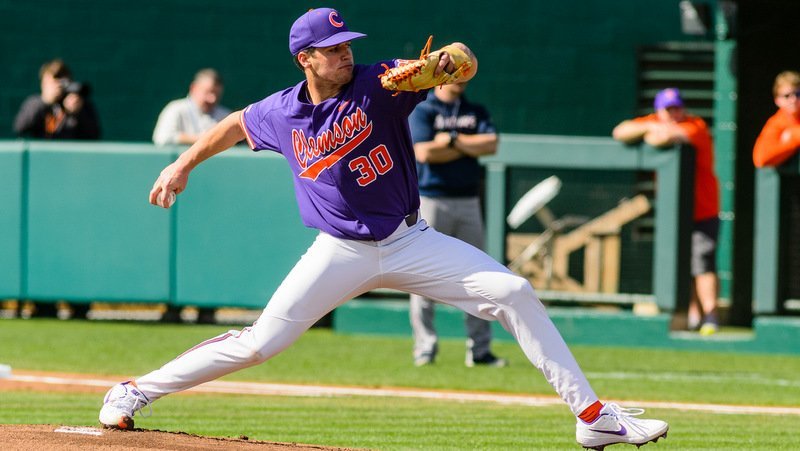 Sharpe (1-0) earned the win in his first game as a Tiger in the first game of Saturday’s doubleheader. The right-hander allowed just two hits, no runs and two walks with eight strikeouts in five innings pitched. In the nightcap, Sharpe got the start as the Tigers’ designated hitter, hitting two homers and driving in all three runs in the 4-3 loss to the Jags.

Sharpe said he loves being able to contribute both ways.

“I've done it my whole life and that's what I really like doing. I like being on the field a lot,” Sharpe said after game three. “I've been doing it since I was three years old, so I honestly enjoy it and it just keeps me going and keeps me focused. So, I think it's beneficial for me.”

Head coach Monte Lee said he has big plans for the freshman and plans to let him hit on days he pitches. However, Saturday was all about getting his feet wet.

“I'm really grateful for him. He's a great coach,” Sharpe said of Lee. “I'm really glad he gave me the opportunity in game three, and I didn't know if I was going to get it after the pitching performance.”

Lee joked that Sharpe didn’t know what pitch he hit for the first home run.

“Well, I thought it was funny. I think he thought he hit a fastball on his first one and it was a breaking ball. He's going to come up here and say that it was a fastball, but it was actually a hanging breaking ball. But that's what good hitters do. They don't really know half the time. They just see ball, hit ball. Davis is a special hitter. He really is. He's a special hitter. He can gear it up just enough when a guy has got pretty good stuff. He can gear it up and dial it up a notch and that's what the special players do. We could see it in the fall. He hit, I think, six home runs in the preseason between the fall and the spring intrasquad for us.”