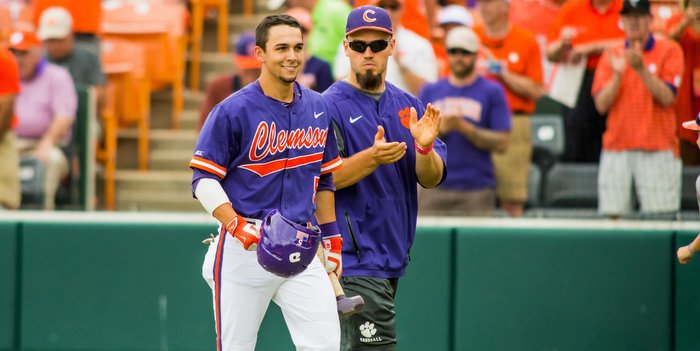 CLEMSON – Next up is the Regional finals against Oklahoma State.

Alex Eubanks turned in the best performance of his young career and Chris Okey and Seth Beer each homered and drove in three runs as Clemson defeated Western Carolina 15-3 in an elimination game at the NCAA Clemson Regional Sunday afternoon.

Eubanks improved to 5-4 with the complete game effort, the first complete game in 11 starts. He gave up six hits, walked two and struck out three while allowing the two earned runs. He threw 102 pitches.

The Tigers, who improved to 44-19 on the season, will face Oklahoma St. in the regional final at approximately 9:10 pm. If Clemson wins that game, the two teams will meet Monday at 7 p.m. If Oklahoma St. wins, the Cowboys win the regional and advance to the Super Regional.

"What a great job by Alex Eubanks. It's exactly what we needed," head coach Monte Lee said. "To get through this ballgame we needed a deep start and he gave us a complete game. He pounded the strike zone and did an unbelievable job for us. We found a way to put together some big innings. We did a really good job of taking our walks and got pitches to hit. We ran some balls out of the ballpark. We played a pretty good game defensively. Overall, it was about Alex Eubanks. We needed a big time start by him to get us to tonight. I wrestled with the decision whether to start Euby or to start (Pat Krall), and I'm glad I made the decision to start Eubanks. He did an unbelievable job for us."

Okey walked to lead off the second and moved to second on a passed ball. Weston Wilson hit a sharp single to second that moved Okey to third, and the Catamounts’ throw to second on a steal by Wilson sailed into short center field, allowing Okey to score for a 1-0 Clemson lead. 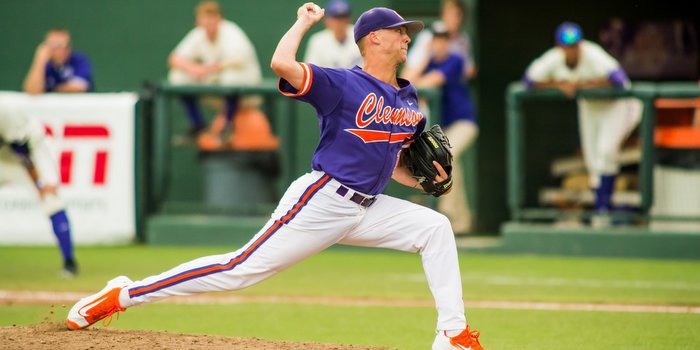 Chase Pinder led off the third with a walk and moved to second on a sharp single to left by Eli White. That brought up Beer, who roped a two-run double into the gap in right center for a 3-0 Clemson lead. The hit extended Beer’s on-base streak to 59 games. Okey walked in the next at-bat, and Reed Rohlman launched a deep fly to center that moved both runners up a base. Wilson bounced out to third, but Beer scored for the 4-0 lead.

Mike Triller walked to put runners at first and second, and Williams lined a grounder down the third base line that was snared by third baseman Caleb Robinson. Robinson didn’t beat Okey to the bag, however, and it appeared that the Tigers would have the bases loaded. Triller bounced too far off of second on the play, however, and the threat ended with the Tigers holding a 4-0 lead.

The Tigers extended the lead in a big way in the fourth. Pinder dropped a solo homer over the wall in left for a 5-0 lead and his 11th round tripper of the season. White singled and Beer walked, followed by an Okey single to left that score White for a 6-0 lead. Rohlman lined a double to left center that scored Beer and Wilson followed with a single to left that scored Okey for the 8-0 lead. Triller then drilled a single off the leg of the pitcher to score Rohlman and the Tigers held an early 9-0 lead.

Beer made it 10-0 with his 18th homer of the season, a solo shot in the sixth that cleared the wall in right center.

A couple of hit batters and two hit balls led to four runs in the eighth. Beer was hit by a pitch and Okey launched a ball deep into the Chapman Grandstands in left – his 15th of the season– to make it 12-0. Rohlman was then hit by a pitch, and Wilson made the Catamounts pay with a two-run shot to left to make it 14-0.

A leadoff double by Garrett Brown and two long fly balls led to the Catamounts’ lone run in the eighth.

White added a home run in the ninth to extend Clemson's lead to 15-1. Western Carolina added two runs off of Eubanks in the bottom of the ninth.

"Our attitude was really, really good. Our guys were very, very confident and ready to go," Lee said. "We know what's at stake. We knew that we had to try to find a way to get through this game to get the rematch with Oklahoma State. They're the team in the driver's seat and we've got to play catch up but I can tell you this - if we find a way to win this game tonight, it's anybody's game tomorrow."

Clemson vs. Western Carolina Photos >>
Clemson vs WCU Boxscore
Get the latest Clemson gear right here!
Comment on this story