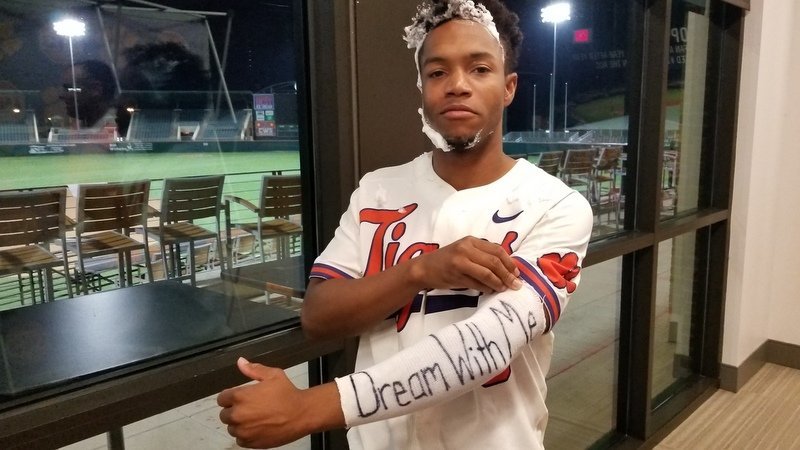 Jordan Greene shows off his sleeve

CLEMSON – Dream With Me.

Those words were emblazoned on Jordan Greene’s sleeve for Monday night’s series finale against FSU, but Greene didn’t know how prophetic it would prove to be.

Greene launched the first pitch he saw in the bottom of the ninth for a ringing homer to left, lifting No. 6 Clemson to a 5-4 walk-off victory over FSU and a series win. The win keeps the Tigers’ dreams alive of a top-eight national seed.

Dream with me indeed.

Greene stopped and admired his shot for a brief moment, arms outstretched, then began the long trot around the bases. It was a trip that became a blur.

“Step on every base, first of all, because if I miss a base and get called out, that's not good,” Greene answered when asked what he was thinking. “After that, I don't really know. I wasn't thinking about anything. Absolutely nothing running around the bases. I saw my teammates jumping up down and throwing water. It was just a great moment and I was taking it all in.”

Greene has played well of late but didn’t enter the game until the seventh inning, pinch-hitting for Robert Jolly. Greene is a case study in staying ready for your chance.

“I get that from my dad. My dad is a blue collar guy and growing up I feel like he instilled some of those principles in me,” he said. “Never take anything for granted, keep working and grinding and if you do that good things will come.”

As for the sleeve, it was an idea gleaned from his good friend, Clemson defensive end Clelin Ferrell.

“Me and Clelin are really good friends. It's just one of those things. This was his saying and I told him I was bringing it to baseball,” Greene said. “I write different things on it - an inspirational quote I may hear for the day. I guess it's the team motto for me. It's one of the things I live by. You just have to play like a little kid. Never stop dreaming. Never give up and keep going at it.

“I switch it up. This is probably the third time I've worn this year and it was the first one, too. I guess this one is kind of special to me so I'm going to have to hang this one up. I have no idea. Sometimes things just feel right. Today, I was just like, 'You have to keep dreaming and keep believing and good things will happen.' I kind of lucked up. It was good fate or fortune.”

Greene has often said that even a blind squirrel finds a nut now and then, and he stayed with that phrase after the Monday win.

“The most legendary blind squirrel ever. I don't know. I grooved a good pitch,” Greene said with a laugh. “I deeked them the at-bat before. Same pitch and I grounded it back to him, but then the next pitch I was able to stay on it a little bit better. I got extended. I just don't even know how to describe it right now. I don't even know how I feel. It's never happened to me before. I don't hit them like Seth and Logan and these guys, so I don't even know what to say.

“I wanted to be aggressive coming off the bench. The last thing I wanted to do was to be passive, get behind in the count and try to catch up and fight and battle the whole time. I tried to get ahead. Logan was talking to earlier in the game saying in the first at-bat you wanted to see if you could get a swing in and get on time and get on plane and if it doesn't work out, it doesn't work out, but the next at-bat you'll be ready.”

The highlight of the night was seeing his teammates waiting for him at home plate.

“I can't even describe it. I've never been a part of it,” Greene said. “I just saw them all there with water cups. I just knew I was about to drown in water and shaving cream. It's just amazing.”

We're dreaming with you, Jordan. pic.twitter.com/AOzDsgznhZ