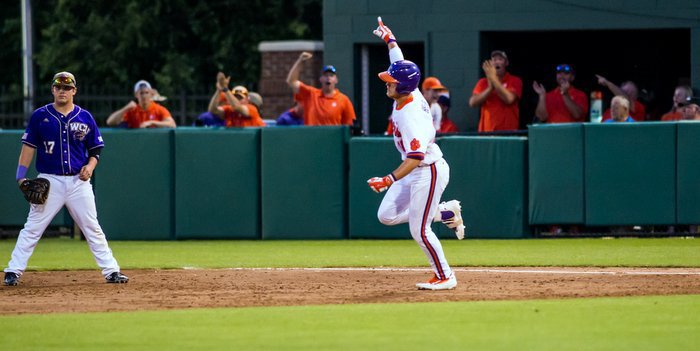 Chris Okey and Mike Triller each hit two home runs and drove in four, while Beer drove in four with his slam. Eli White and Chris Williams also homered, and Williams drove in five runs. Triller has hit four home runs in his last four games.

The run output for the Tigers over the last two games has been historic. The game marked the first time the Tigers have scored 15 or more in back-to-back games since 2011, and it was Clemson's highest scoring output in an NCAA Tournament game since defeating Alabama 19-5 in the 2010 Clemson Super Regional.

It was also the first time since March 14, 1998, that Clemson has scored 18 runs in back-to-back games. Clemson scored 18 and 19 runs in a doubleheader against Maine that season. Clemson set a school NCAA Tourney record with the seven homers. Clemson’s 24 runs are the most by the Tigers in an NCAA Tournament game since they scored 24 on Seton Hall in the 2001 Clemson Regional. Clemson's seven home runs are just one off the school record for any game. The Tigers had eight against South Carolina in 1962. The 17 walks were a Clemson NCAA tourney record and the 24 RBI also set a Clemson tourney record.

Clemson will face Oklahoma St. at 7 p.m. Saturday in the winner’s bracket game. Nebraska and Western Carolina will face off at noon. 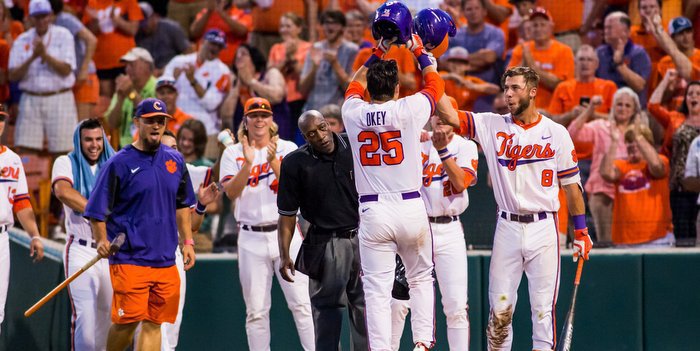 The Tigers loaded the bases – with three consecutive two-out walks – but Reed Rohlman flied out to short left to end the scoring threat in the first.

Barnes retired the first two batters in the second, but a single and two-run homer to left by Caleb Robinson gave the Catamounts a quick 2-0 lead. The Catamounts extended the lead because of terrible Clemson defense in the third. A routine grounder to third was thrown high by Jordan Greene to start the frame, a sacrifice bunt attempt was bobbled at first for another runner and Brett Pope laced an RBI single to center to plate another run. Two singles later – bloopers – and a wild pitch later the Catamounts had a 6-0 lead, the floodgates opened by the two early errors.

How did the Tigers respond to the six-run deficit? In a big, big way. Eli White led off with a single, and after Beer flied out for the first out Okey singled to center. Wilson singled to center to score White with the first Clemson run, and Rohlman worked a full-count walk to load the bases. Korey Anderson replaced starter Bryan Sammons and gave up a two-run single to left by Chris Williams that made it 6-3.

Mike Triller struck out for the second out, but Andrew Cox walked on a 3-2 count that loaded the bases yet again. Chase Pinder was hit by a pitch, scoring Rohlman, making it 6-4. White then walked to score Williams to make it 6-5, and that brought up Beer. Beer worked the count to 2-0 and then deposited a fastball into the middle of the batter’s eye in center for a grand slam, his 17th home run of the season, to make it 9-6 Clemson. Okey followed with a solo shot to left, his 13th of the season, and the Tigers led 10-6 at the end of three.

The ten runs were the most by the Tigers in one inning in a NCAA game since scoring 12 against East Carolina in 2002. The inning lasted an hour and nine minutes, with 14 total runs scored between the two teams.

The Tigers added half of those ten runs in the fifth. Pinder and White walked to lead off the inning and both runners moved into scoring position on a Beer groundout. Okey was walked intentionally to load the bases, and Wilson walked to plate Pinder for an 11-6 lead. Rohlman hit a sacrifice fly to left to score White to make it 12-6, and Williams added to the damage by smoking a three-run homer to left to make it 15-6. The home run was Williams’ eighth of the season and the 66th team homer on the year.

The Tigers continued to pour it on in the sixth. Beer was hit by a pitch following a White single, and Okey made the Cats pay with a long three-run shot to center field to make it 18-6. The ball landed just to the left field side of the batter’s eye, putting an exclamation point on Okey’s 14th long ball of the season.

The Cats chased Barnes in the seventh after he loaded the bases with one out. Paul Campbell came on in relief of Barnes and gave up a two-run single to make it 18-8, while a fielder’s choice made it 18-9. Barnes pitched much better than the score indicated, pitching 6 1/3 innings, walking three and striking out six while giving up nine runs, five of which were earned.

Triller added to the fireworks in the bottom of the seventh – smacking a two-run shot to deep right to make it 20-9. The homer was Triller’s fourth of the season, and two batters later White hit a laser into the seats in left-center – his sixth of the season – to make it 21-9. The Cats added another run off Campbell to make it 21-10, but Brooks Crawford came in a shut the door with the bases loaded.

Triller added a two-run shot in the eighth and the Tigers added another run on a sacrifice fly to account for the final runs.

Clemson vs Western Carolina Boxscore
Get the latest Clemson gear right here!
Comment on this story