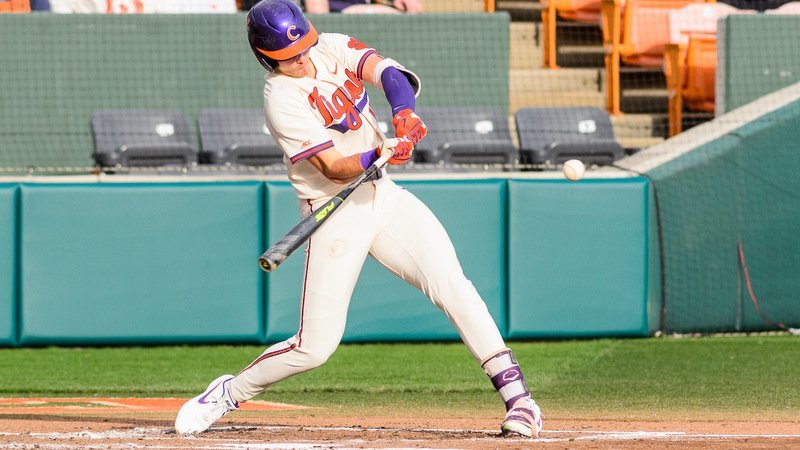 The Tigers had a six-run sixth

CLEMSON – Head coach Monte Lee preaches that free 90’s and big innings are the perfect recipes for winning baseball, and his Tigers got both Sunday afternoon.

No. 14 Clemson rode a six-run sixth inning, which featured two walks and three hit batters, to an 11-6 victory over VMI Sunday afternoon at beautiful Tiger Field, completing the three-game sweep of the Keydets.

Logan Davidson had three hits and scored twice, and Sam Hall homered and drove in four in the victory. Sam Weatherly (1-0) gave up one run in 2 1/3 innings of scoreless and hitless relief to pick up the win in relief of starter Justin Wrobleski. Keydet reliever Derek Tremblay (0-2) suffered the loss.

VMI held a 3-0 lead through the game’s first five innings with Clemson mustering just one hit to that point. Logan Davidson doubled to start the bottom of the sixth, Davis Sharpe walked, and Grayson Byrd bounced into an out that moved the runners to second and third. Pinch-hitter Chris Fairey was hit by a pitch to load the bases, and Michael Green was plunked on his left arm to score the first run and re-load the bases.

Pinch-hitter Kyle Wilkie walked, forcing in another run to make it 3-2, and Bryce Teodosio bounced into a fielder’s choice that scored the tying run. Teodosio took second on a stolen base, and Sam Hall was hit by a pitch to once again load the bases. That brought up Jordan Greene, who stroked a two-run single to center to give the Tigers their first lead of the day at 5-3. Davidson smacked his second hit of the inning one pitch later to score Hall, and the Tigers led 6-3.

The Keydets added another run in the seventh to make it 6-4, but the Tigers opened it up in the bottom of the eighth.

Green was hit by a pitch, Wilkie singled to center, and Teodosio was walked to load the bases with no outs. Hall hammered full-count pitch over the wall in left-center for a grand slam and a 10-4 lead. Davidson later doubled, and Byrd stroked an RBI single to account for the final Tiger run.

The Keydets added two runs in the ninth on a hit and an error.

Clemson hosts East Tennessee Tuesday at 4 pm, then hosts South Carolina Friday at 6 pm in the opener of a three-game series. The Saturday game will be played Saturday at Greenville’s Fluor Field at 1 pm, and the series finale will be at Founder’s Park in Columbia at 1 pm.