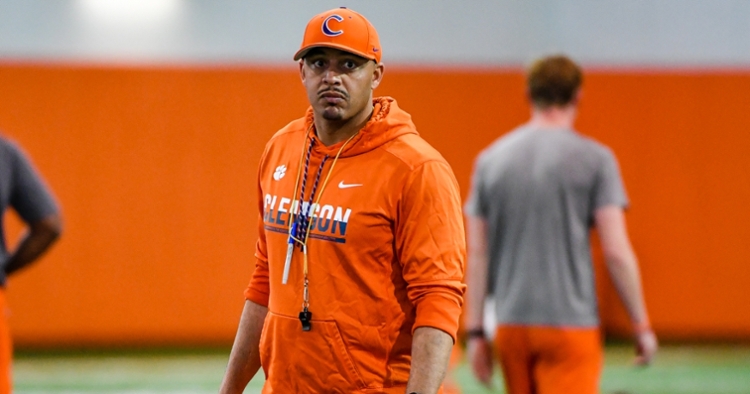 Elliott received a raise to $2 million per year

The Clemson Board of Trustees approved a new contract for Clemson offensive coordinator Tony Elliott Thursday morning, giving Clemson two of the three highest-paid coordinators in the country.

Elliott, who was making $1.7 million, will receive a raise to $2 million at the beginning of the next fiscal year and his contract was extended three years through 2026. According to USA Today, Clemson defensive coordinator Brent Venables is now the highest-paid assistant in the country at $2.4 million per year. (Steve Sarkisian was tied for No. 1 when he was at Alabama at $2.5 million, but he is now the head coach at Texas; Kevin Steele also made $2.5 million when he was at Auburn; Bo Pelini made $2.305 million at LSU last season but was fired).

Brandon Streeter, the passing game coordinator, and quarterbacks coach, receives a raise from $595,000 to $615,000 and a year was added to his contract and will run through 2023. New running backs coach CJ Spiller, hired to the staff in a minor shakeup after the bowl game, is added at a salary of $300,000 per year.

Elliott has been rumored to be in the running for several head coaching jobs over the last few years, and with good reason. Clemson’s run of nine straight 10-win seasons started when he became a full-time assistant coach. Clemson is 111-16 since he came back to Clemson in 2011. He was the recipient of the 2017 Frank Broyles Award as the nation’s top assistant coach.

Former tight ends coach Danny Pearman was part of the staff reshuffling and will now be the Director of College Scouting. His salary, which was $545,000 last year, is now $250,000. The rest of the on-field staff had a year added to their existing deals, which will now run through 2023.

Members of the support staff all had a year added to their current deals (Jordan Sorrells, Woody McCorvey, Kyle Richardson, Jeff Davis, Mike Dooley, and Thad Turnipseed), which will run through 2023. Strength and conditioning coach Joey Batson’s contract also added a year and it will run through 2024.

Head baseball coach Monte Lee, whose contract pays him close to $460,000 per season, had a year added to his contract, which will now run through 2024.