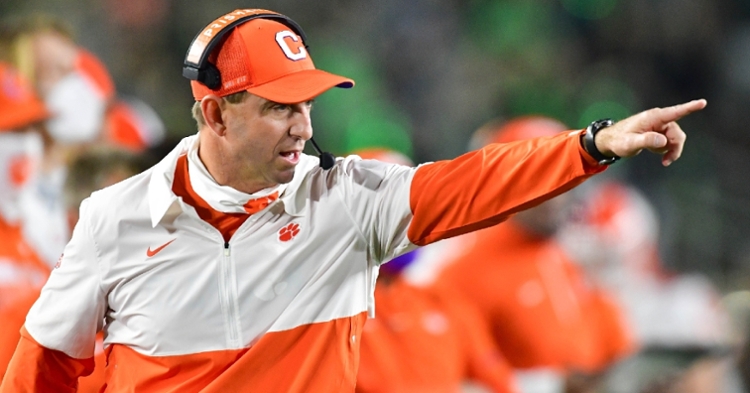 As a member of the Clemson sports information staff grabbed his phone to end Dabo Swinney’s postgame interview session, Clemson’s head coach sat back in his chair and crossed his arms in a moment of quiet and painful reflection. It was obvious that Saturday night’s loss at Notre Dame hurt.

But as Swinney mentioned during his postgame comments, no trophies were handed out after the Irish escaped with a 47-40 double-overtime victory in Notre Dame Stadium Saturday night. The only thing the Tigers can’t be this season is 11-0.

Swinney said that the Tigers’ locker room was hurting.

“It was pretty bad. It was a hurt locker room. People really don't know how much goes into it and what these young people put into it every single day of every week of the season,” Swinney said. “This is a group that hasn't lost much. The last regular-season game we lost was, what, '17? It hurts. It hurts. You put everything you've got into something and it doesn't go your way, it hurts. This is a very competitive group and they expected to win. They never had any doubt. But there was just so much to overcome. We had every opportunity to win and we didn't. You have to give Notre Dame credit. Overtime game on the road, with lots of adversity and lots of mistakes, but we had a chance to win the game and we didn't get it done. Mistakes caught up with us.

“Like I said, if we were 8-0, they would not have handed us a trophy and they haven't handed Notre Dame a trophy. We are 7-1 so the only thing we can't be is 11-0 and we have to learn from it. This is going to be a painful couple of days for everybody. Because everybody cares. They laid it on the line and fought with everything they had and they came up a little short tonight. They made some plays, some big plays, so give them credit. We will go back to work and get some guys healthy.”

Swinney said his team displayed a lot of heart but couldn’t overcome some “awful” mistakes.

“Again, the game didn't go our way but I'm proud of our team. I'm proud of the heart that they displayed tonight and will to win,” Swinney said. “It's my job to help them overcome. It's my job to help them get better and we'll do that. All we can do is congratulate Notre Dame because they did an amazing job. At the end of the day, the first half was just awful - field position, made some critical mistakes, the turnovers. We weren't able to run the ball and that was a huge difference in the game. We couldn't contain their quarterback. We knew third down was going to be critical and who was going to win that battle. They won the third-down battle and it was a big difference in the game.”

“I will say this, we haven't lost in a long time and I know we made a lot of mistakes and we have a lot of things to learn from but I have never been more proud of a team,” Swinney said. “You can't ask for any more from a group of young people. They fought with every ounce of everything they had. We overcame a lot. We got in a big hole - back-to-back turnovers. One of them was a scoop and score. We've had some really tough breaks with that as of late - three games in a row. We've been able to overcome that and tonight we weren't. We come right back and fumble. That's 10 points, right there and it's the difference at halftime. We're in a hole, but our guys battled their tails off.

“We get back in the game and take the lead a couple of different times. We had our chance to win the game, every opportunity to win the game in regulation and couldn't get it done. Then we go to overtime twice and made a couple of mistakes again. That was a big penalty that we had. We got them for holding and it was off-setting, first down, which was critical. We didn't win the game but you saw what this team is made of. This team is made of the right stuff and as coaches we've got to help them and we will.”

The Tigers will use next week’s open date to correct those mistakes and get healthy.

“We've got an open date. We've got a lot of work to do. We've got a banged up football team and a lot of guys out. We've got to get some guys back and get some guys healthy,” Swinney said. “We'll get back at it down in Tallahassee in a couple of weeks. This was a heck of a game between two great teams. Unfortunately, we came up on the short end. As I always tell everybody, it's about how you respond. I know this is going to hurt for a couple of days for us but we'll get back to work on Monday and put this on in the rearview mirror like we always do.

“Florida State will be the biggest game of the year and we'll battle our tails off and see if we can get back on track with a win and stay in the hunt for this league. Everything goes through Charlotte for us in the ACC. We've got to cut out some of the mistakes. I can't say how proud I am of our team - their will, heart and fight. That's a hurting locker room. It's been a long time since we've lost a game in the regular season but they'll bounce back. You saw what they're made of tonight.”